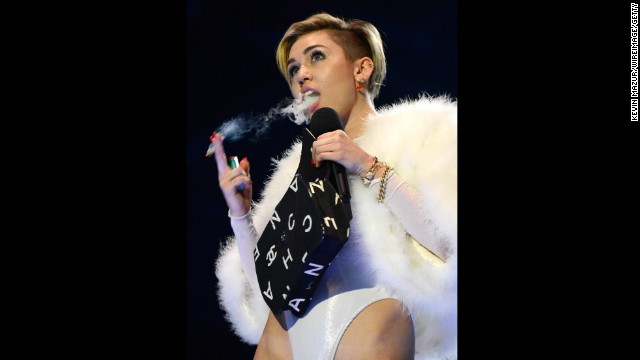 Miley Cyrus accepts the award for best video for her song "Wrecking Ball" during the 2013 MTV Europe Music Awards in Amsterdam, Netherlands, on Sunday, November 10. Click through the gallery to see more scenes from the awards and celebrity arrivals: 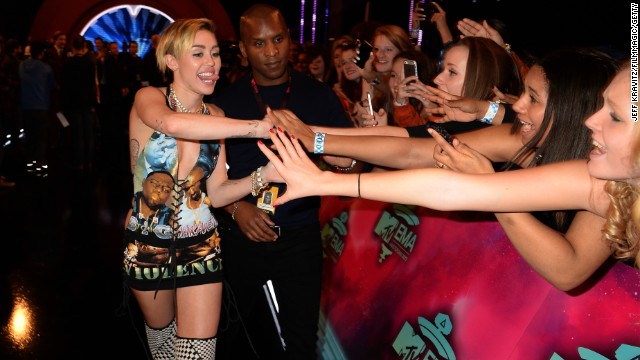 Miley Cyrus meets fans as she attends the awards at the Ziggo Dome in Amsterdam. 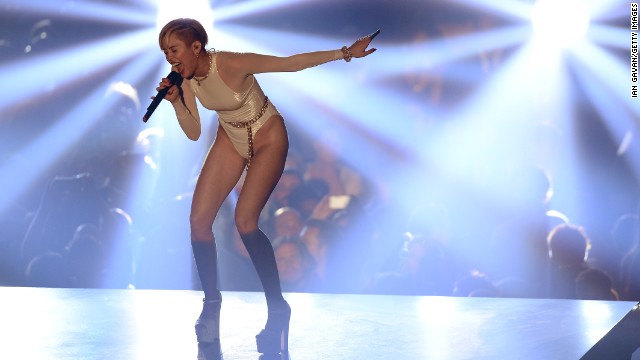 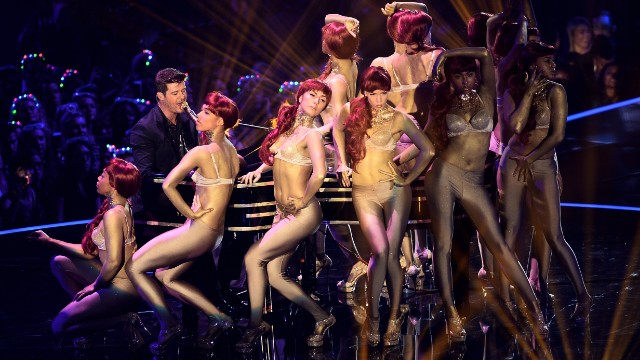 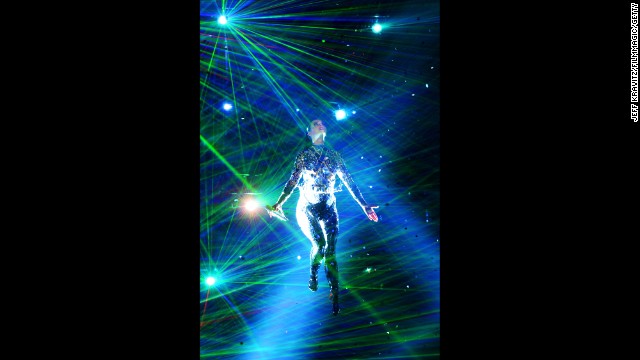 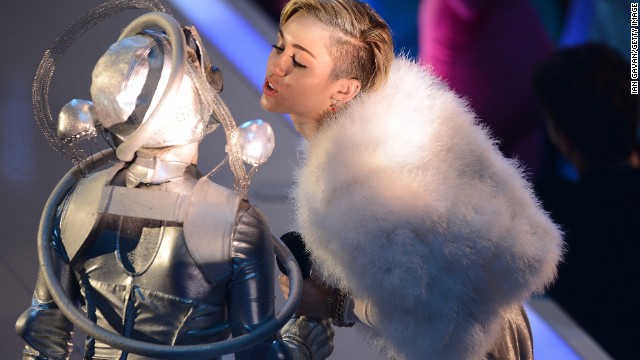 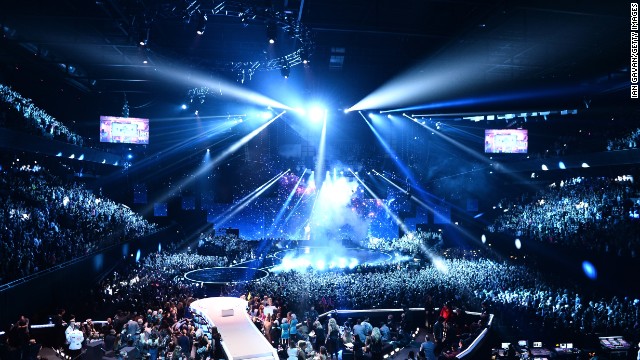 A wide view of the Ziggo Dome captures the lights and excitement on Sunday. 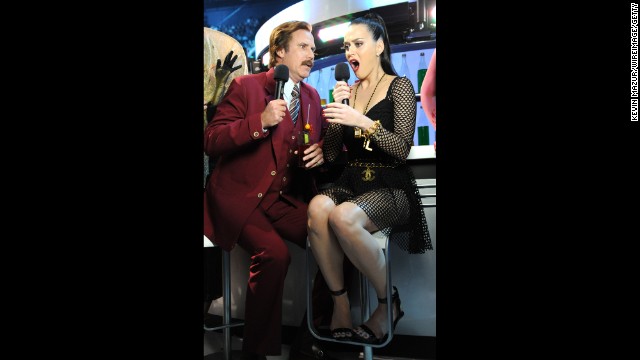 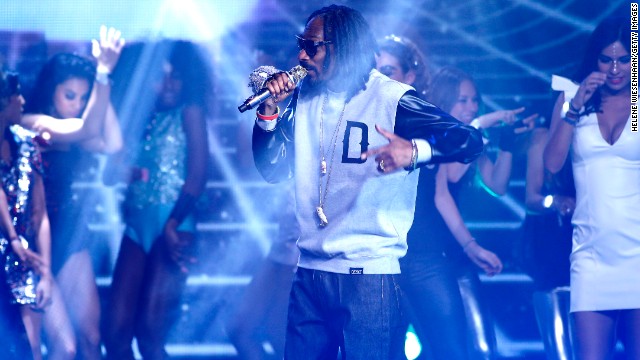 Snoop Dogg performs his classic "Gin and Juice" during the outside broadcast. 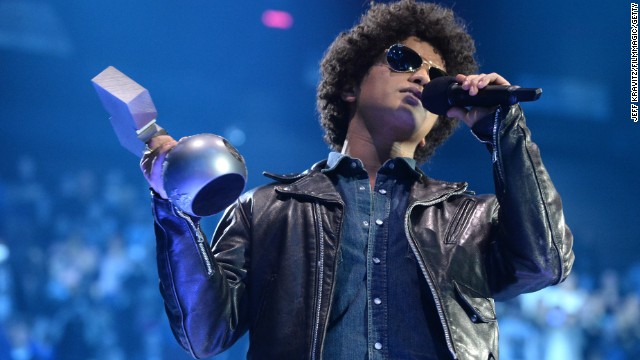 Bruno Mars accepts the Best Song award for "Locked Out of Heaven." 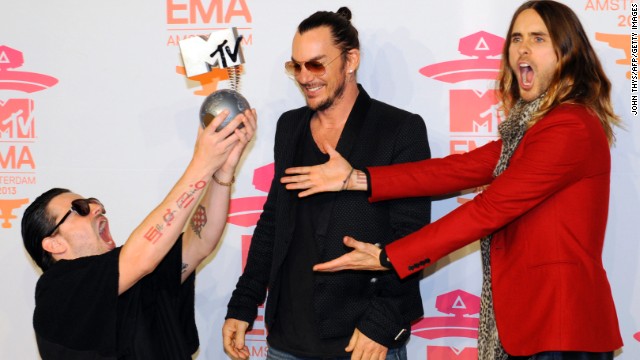 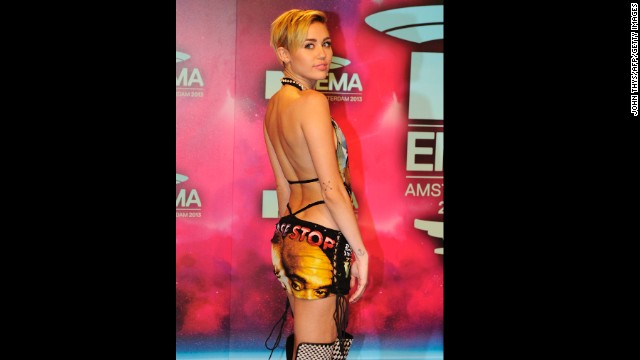 Miley Cyrus sports her outfit upon her arrival. 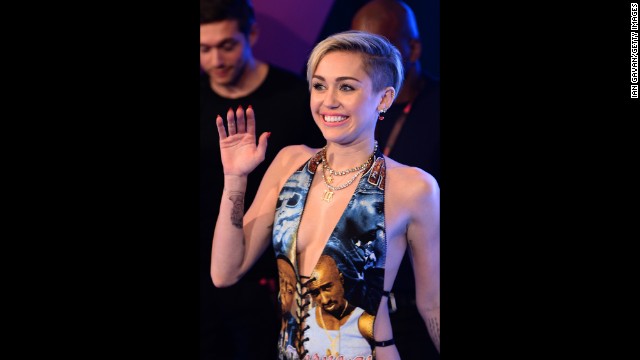 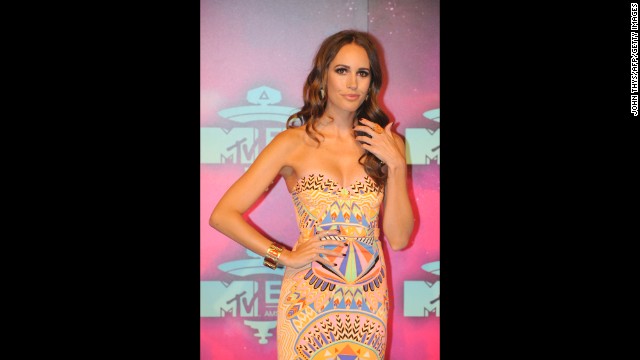 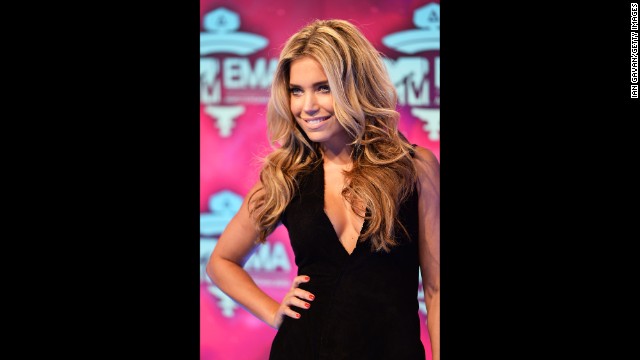 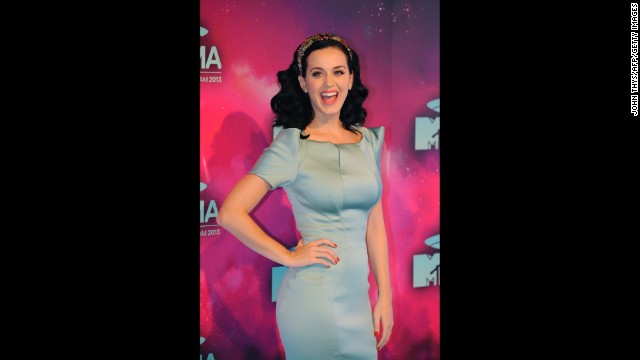 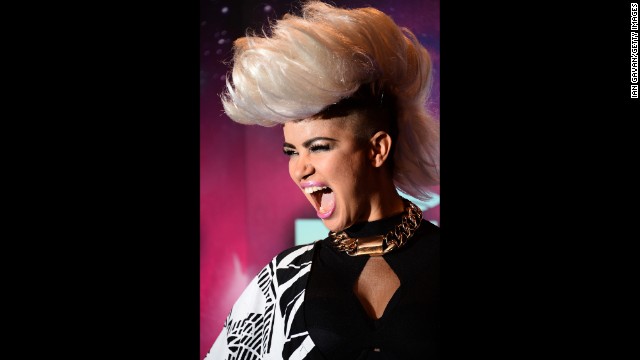 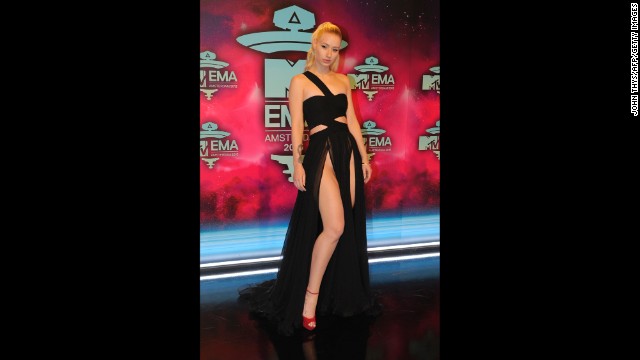 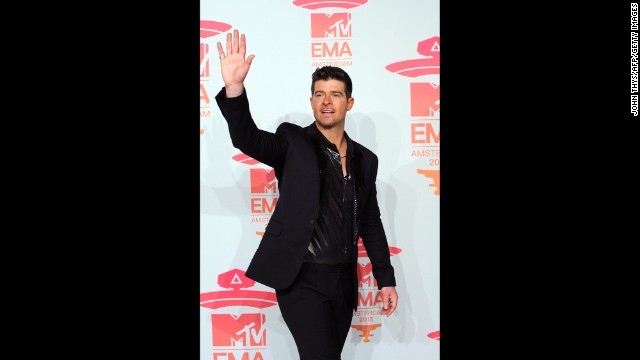 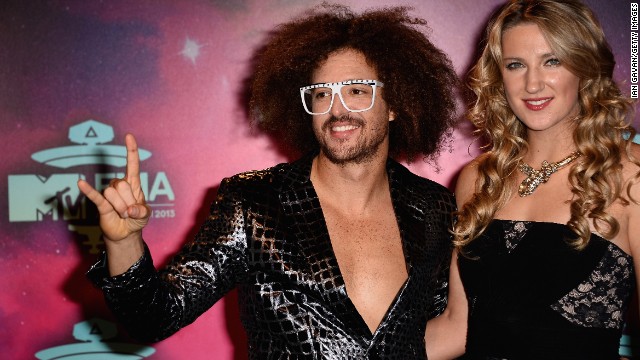 (CNN) -- For the 2013 MTV Europe Music Awards, Miley Cyrus was as attention-grabbing as ever.

The 20-year-old singer, who was a two-time performer during Sunday's ceremony in Amsterdam, Netherlands, lit what appeared to be a joint on stage during her acceptance speech for best video with "Wrecking Ball."

Wearing a white leotard and a furry shrug, Cyrus carried a Chanel purse on stage with her as she accepted the award. Although her EMA wouldn't fit in the clutch, she did try to make a little more room by fishing out what looked like a spliff and then proceeded to smoke it.

The puff wasn't shown during the EMAs' airing on MTV's flagship channel, and Cyrus has been quiet about her action on Twitter.

On Sunday night, she simply instructed her Twitter followers to "Stay in school & Be kind. Other than that HAVE FUN."

Regardless, Cyrus' smoking was a slightly more risque act during a relatively tame event, which featured performances from Snoop Dogg, Icona Pop, The Killers, Kings of Leon and Bruno Mars.

Yet, given that this was an MTV event, the night wouldn't have been complete if it didn't include a little twerking.

That came courtesy Cyrus, who, for the second time in three months, took the stage at an MTV awards ceremony to perform her hit "We Can't Stop." While some might've been expecting something just as scandalous as her now-infamous set at the 2013 MTV Video Music Awards, Cyrus went in a different direction.

Instead of giant teddy bears, the 20-year-old singer was accompanied by alien figures dressed in head-to-toe black, and she herself wore a skintight, knee-length silver dress rather than a onesie.

The twerking stayed more or less the same and was completely absent from her later performance of "Wrecking Ball."

Cyrus was clearly one of the night's big draws -- she even came out first, ahead of the night's MC, LMFAO's Redfoo -- but she didn't lay claim to the entire show.

Thicke followed Cyrus with a rendition of "Blurred Lines" that had a cameo from Australian rapper Iggy Azalea, and the night's best female award winner Katy Perry soon followed with a performance of "Unconditionally" that found her suspended in the air.

Like the singers who went before her, Perry fully embraced the night's theme of an "out of this world" space party, ending her performance in a glowing silver bodysuit.

Throughout the event, held at Amsterdam's Ziggo Dome, awards were handed out in obligatory categories such as best pop, rock and alternative, as well as EMAs-specific honors such as top worldwide act and world stage.

Eminem, one of the EMAs' top nominees, took home the award for best hip-hop act, and was also named the global icon of the year.

In between awards and performances, Will Ferrell's Ron Burgundy made some comedic appearances, showing just how much can go wrong when his overly confident newscaster character is unleashed in the Netherlands.