How new airline routes are reshaping the world

Editor's note: From July 14 to 20, Farnborough will be the center of the aviation world as the town hosts its biennial airshow. From the latest technology and trends to deals and developments, CNN will be on the ground to bring you all the buzz from the event.

(CNN) -- Perhaps nothing illustrates the ambitions of the well-established Gulf carriers -- Emirates, Etihad and Qatar -- and Turkish Airlines so much as the swift expansion of their route networks.

Turkish Airlines currently flies to about 253 destinations, and plans to add another 60 to its network in the next five years. Emirates, meanwhile, is rumored to have placed a record-breaking order for Boeing's 777X aircraft.

"These carriers have a good modern fleet and can fly long distances, and because of their geographical position, they can connect anywhere from their hub to almost anywhere else in the world, either non-stop, or one-stop," says John Strickland, an independent transport consultant.

When it comes to choosing what routes to launch, it happens that the region's major carriers have a carefully calculated strategy that can speak volumes about emerging markets.

Slideshow: How drones will change your life

Traditionally, the United States has been overlooked in favor of the European market by the Gulf carriers and Turkish. All that's changing as Etihad, Emirates, Qatar and Turkish Airlines all either introduced direct routes to the States last year, or else have some in the works for 2014.

"They're really starting to shake up the U.S. market for the first time," says Brendan Sobie, a spokesperson for the Center for Aviation. 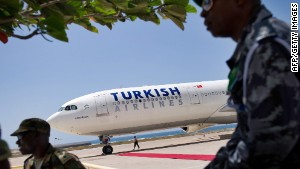 Turkish Airlines flies to 39 destinations in Africa, including Somalia

In the next 15 years, the airline plans to double the number of U.S. destinations it flies into. Etihad will fly to four U.S. cities by the end of 2014, while Qatar Airways will be up to six.

The expansion has not gone unnoticed by the American aviation industry. The U.S. trade group Airlines for America and the U.S. pilot union, Air Line Pilots Association International, have been the most ardent opponents of the Gulf carriers encroachment into the U.S. market, often joining Delta and United in lobbying Congress for protectionist policies.

"It is interesting to see how the U.S. carriers and politicians are starting to respond," says Sobie.

Read more: Why the Dubai Airshow is a gamechanger

In just a couple of years, Turkish Airlines has become the largest international carrier in Africa, flying into 39 destinations. At first glance, some of the African cities in their network might seem random -- why fly to Somalia?

They're really starting to shake up the U.S. market for the first time
Brendan Sobie, Centre for Aviation

Their business plan underlines investment strategies for Turkey as a whole. According to the Center for Aviation many of the countries they serve, or are planning to serve, have a rapidly growing economy. In 2012, Rwanda's GDP grew by 8%, and Nigeria's by 6.6%. The continent also houses a wealth of natural resources.

"The most important geographic part of the world over the next 100 years will be Africa. In this respect, any destination (we fly to) in Africa will create more effective results than, say, a destination in Europe," says Ali Genc, Turkish Airlines' senior vice president of media relations.

Turkish Airlines and the Gulf carriers have been increasingly developing their network across Brazil, Russia, India and China (BRICs) -- the nations widely viewed as the most promising developing markets in the 21st century. The importance of developing these routes is not simply to connect these emerging markets with the Middle East, but with each other.

These carriers can connect anywhere from their hub to almost anywhere else in the world
John Strickland, transport consultant

"Carriers like Emirates, Etihad and Qatar can access emerging markets in Africa, Asia and Latin America and connect them in a way that is meaningful to travelers, and that European carriers can't hope to copy," says Strickland.

Budget carriers like Air Arabia and flydubai have become particularly attractive to cities and towns across Central and Eastern Europe.

"Regionally, we're seeing a lot of interest in the Commonwealth of Independent States (CIS)," says Sobie.

"Air Arabia and flydubai is a good fit for the medium-haul, thinner routes that are high-yielding and growing, but can't support the widebody aircraft of Emirates," he adds.

Part of complete coverage on
Farnborough Airshow
Is caroplane the future of travel?
updated 10:26 AM EDT, Thu July 17, 2014

CNN takes a look at the new car-plane hybrid that brings affordable recreational air travel to the masses with hopes of creating alternative market for private aircraft.
And the world's best airline is...
updated 5:36 PM EDT, Wed July 16, 2014

Cathay Pacific was named the world's best airline at an awards ceremony at the Farnborough International Airshow Tuesday.
Meet the pilots who fly vintage
updated 9:24 AM EDT, Mon July 14, 2014

Remarkable vintage aircraft mark 100 years of aviation with The Great War Display Team at Farnborough Airshow this July. Nine of five different types of aircraft from World War I will be on display this year.
Best of Farnborough
updated 8:40 AM EDT, Tue July 8, 2014

For nearly half a century, this small town in Hampshire, England has demonstrated a commitment to groundbreaking plane design with its longtime history of aircraft innovation.
100 years of aviation
updated 4:30 AM EDT, Tue July 8, 2014

Astonishingly, the first ever aircraft took the skies in 1914. Since then, planes have taken on a wealth of gravity deifying forms, from the Flying Boat to the 'SuperJumbo' Jet.
Space tourists could blast off from UK
updated 4:44 PM EDT, Tue July 15, 2014

Britain has stolen a march in the space race with plans for the world's first spaceport outside the U.S., which is hoping to be operational by 2018.
How airline routes shape the world
updated 8:06 AM EDT, Tue July 8, 2014

Airline routes have connected the world in unimaginable ways, however, these paths also indicate the financial climates and emerging markets of the areas they connect.
The airliner that won't quit
updated 10:20 AM EDT, Wed June 4, 2014

The DC-3 airline is known for its sturdy construction, with hundreds in flight 80 years on from its initial take off. Find out why this legendary model remains hugely popular.
Sheikhs on a plane
updated 11:52 PM EST, Mon November 18, 2013

The Middle East is taking hold of the private jet market, showing their love for luxury flight experiences and premium quality design.