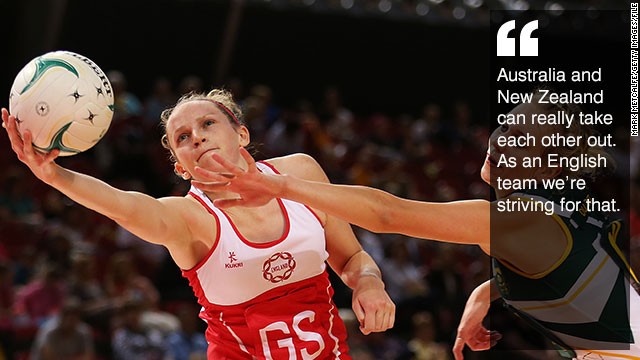 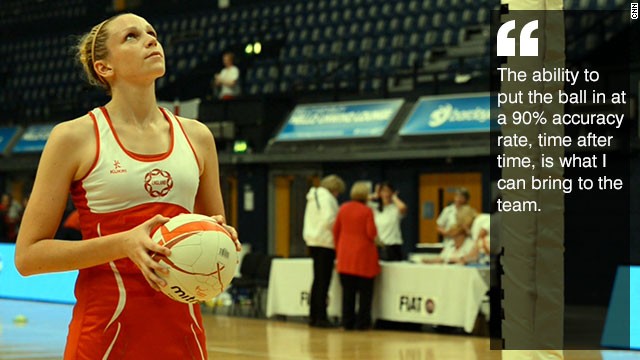 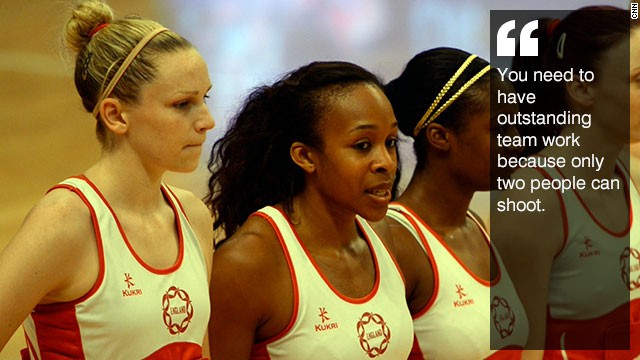 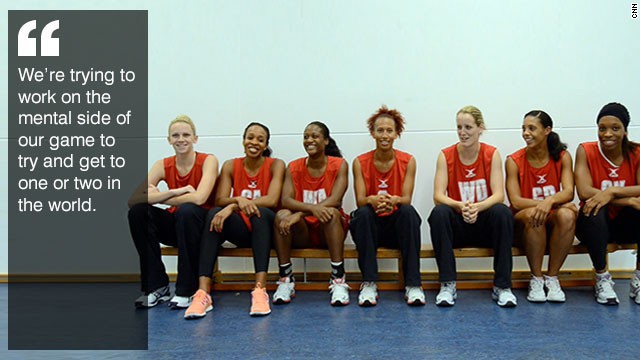 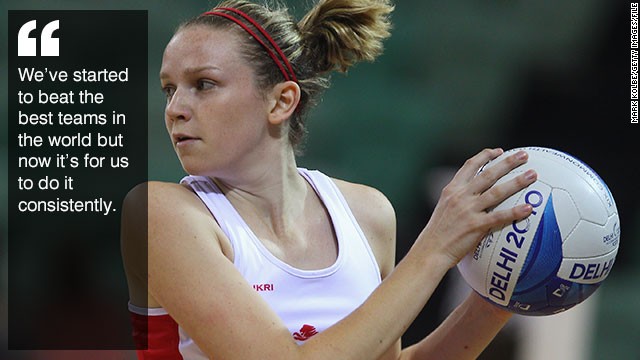 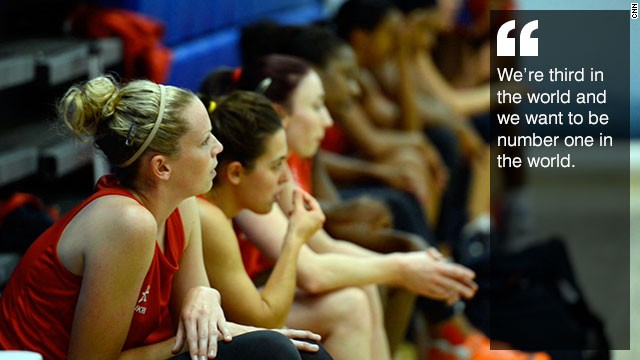 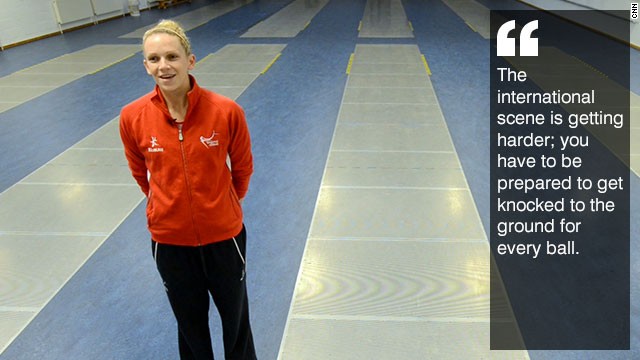 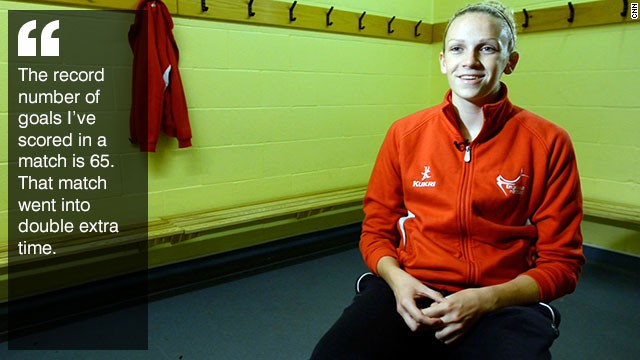 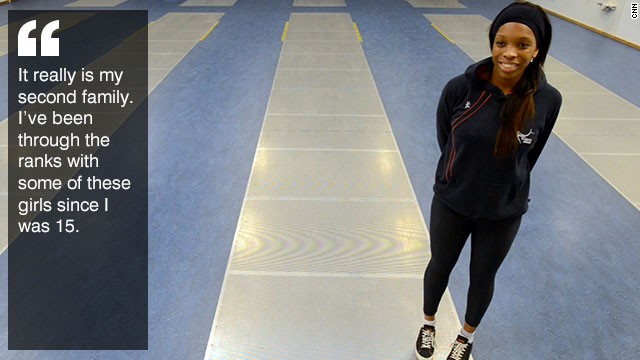 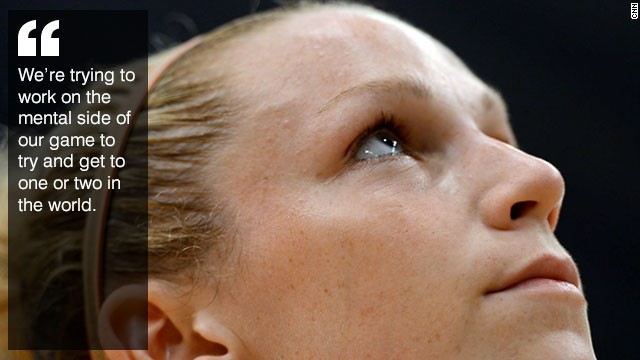 (CNN) -- If England's netballers are going to realize their goal of becoming the world's finest team, they're going to have to get nasty.

No longer does Jo Harten want her colleagues to be out-muscled by their Antipodean cousins, who have ruled the roost at the sport's top table for many years.

England's goalscoring hotshot thinks if her team can ally that physicality to an equally sturdy mentality, their aim of being world champions before the decade is out is within grasp.

"The likes of Australia and New Zealand, they can really take each other out, and as an English team we're striving for that," Harten told CNN's Human to Hero series.

"I think in terms of mental and physical it's changing as the game progresses. The international scene is getting harder; you have to be physically prepared to get knocked to the ground for every ball.

"At the moment, as an English team we're trying to build our confidence and work on the mental side of our game to really try and get up there to be one or two in the world."

England have firmly established themselves as the world's third best team, and have now reached a stage where they are nipping at the heels of the two titans in front of them.

A landmark 3-0 series whitewash over the current world champions Australia earlier this year was a mark of their progress, and a sign of the sport's resurgence in England.

Heftier funding and a sustained drive to boost participation has seen people flood back to the sport, reflected in the prowess of the national team.

Now, after bronze medals at the 2010 Commonwealth Games and 2011 World Championships, England want to gatecrash the duopoly that has held firm since the 1960s.

No other nation has won the world title, except when there was a three-way tie with Trinidad and Tobago in 1979, while second-ranked New Zealand will defend the Commonwealth crown in Glasgow next year.

A lot of England's hopes will rest on Harten, who already has 50 caps to her name at the age of 24, as the focal point of their attack.

"The challenge is that we're third in the world as an English team, and we want to be number one in the world," Harten explains.

"I think Australia and New Zealand have this monopoly over netball, and as an English team we're really trying to change and break the mold at the moment.

"We've started new training programs, we've started to beat the best teams in the world, but now it's for us to consistently start to do that, and that's a big challenge."

A netball team consists of seven players, with restrictions on each in terms of where they can roam on court.

Played at a fast pace, players can only take two steps when holding the ball and are only allowed to be in possession for a maximum three seconds.

Speed of thought and fleet of foot are essential, as is teamwork.

As "Goal Shooter," Harten is only allowed in the final third of the court and must rely on her teammates to supply the bullets.

"The main thing for us is working as a team on and off the court, week in week out," she says.

"You need to have outstanding team work because only two people can shoot, so getting the ball from defense to attack is all about how the team can control the pace, control what the opposition are doing as well.

"We just started a new program, so we're seeing each other every week on a regular basis. That really helps our combinations on the court; we do gym training together, running together and obviously tactical stuff together.

"The more contact time we have as a team the better we can produce in international matches."

More than 35,000 people have been reintroduced to the game since the "Back to Netball" scheme launched in 2010, allowing legions of women to rekindle the skills they learned at school.

Healthy crowds turn out to watch the national team in action, with the latest figures showing participation up 34% in the last four years, to just shy of 160,000.

So how close is netball to being included on the Olympic roster?

"I think it's played enough over the world but it's not played by men, which is probably one of the boundaries netball has -- that the men's side of the game is not up there with the women's," Harten explains.

"Having a single-sex sport in the Olympics is unheard of -- there's only one or two. That, coupled with the fact that nations like America haven't fully embraced it.

"They are quite a basketball nation, so when things like that start to happen and that ball starts rolling hopefully it will get into the Olympics in the future."

Though the England team is thriving, the domestic eight-team Superleague does not pay players.

As such players like Harten and Eboni Beckford-Chambers have gone to the other side of the world to compete semi-professionally for teams in New Zealand and Australia respectively.

"I'm probably one of the only members of the England team who is a full-time athlete, but I play my club netball in New Zealand because it's the only semi-pro league in the world," Harten says.

"When I come back I'm an athlete for the England national team and do some coaching part-time.

"Our captain works for Airbus, so she's got quite a good job. Others work for England Netball in different aspects -- regional development centers, coaches, that kind of behind-the-scenes stuff.

"They are not full-time athletes but kind of full-time netball brains."

For Beckford-Chambers, wherever she is playing, it is the camaraderie she revels in.

"The team spirit is what I love about the game -- that I can be with a bunch of girls with the same passion as me," she says.

"We go through all the highs and lows together, and we're all aiming for the same goal. It really is my second family, and I've definitely been through the ranks with some of these girls since I was 15 years old.

"It's something I hold close to my heart and something I just absolutely love doing -- traveling, seeing the rest of the world and playing."