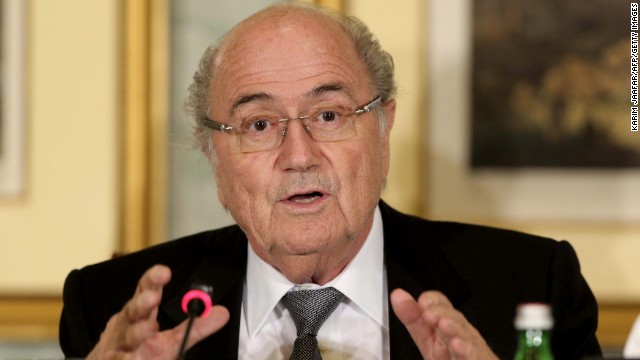 (CNN) -- FIFA president Sepp Blatter has condemned working conditions in Qatar as "unacceptable" after an Amnesty International report claimed migrant worker abuse was rife in the country which will host the 2022 World Cup.

The head of world football's governing body was speaking after a meeting with International Trade Union Confederation (ITUC) president Michael Sommer in Zurich, during which the pair agreed "fair working conditions must be introduced quickly, consistently and on a sustained basis in Qatar."

Blatter met with the Emir of Qatar earlier this month in Doha, holding a news conference afterwards in which he claimed Qatar was addressing criticisms over its treatment of migrant workers.

Contrary to many reports, the unacceptable situation in Qatar regarding working conditions is of big concern to FIFA, and myself. (1/2)

"Economic and political leaders must contribute to improving the unacceptable situation in Qatar," Blatter said in a statement on Thursday.

"I am convinced that Qatar is taking the situation very seriously. These very discussions about Qatar show just what an important role football can play in generating publicity and thus bringing about change."

Blatter has assigned Dr. Theo Zwanziger, a member of the FIFA executive committee which voted in 2010 to award the World Cup to Qatar, to continue talks with the ITUC -- the world's largest trade union federation -- and human rights organizations.

"The aim is to be in a position to report on concrete measures for Qatar at the Executive Committee meeting in March 2014," said Zwanziger.

"Large companies must be reminded of their duties in this area. The international community must also accept its responsibility.

The meeting at FIFA headquarters was mediated by German Football Federation president Wolfgang Niersbach, who said the World Cup coming to Qatar will help improve conditions in the country.

"The awarding of the World Cup and the considerable public exposure gives us the opportunity to point out irregularities and to exact lasting change," said Niersbach. "If we succeed, then a lot will have been achieved."

Following the publication of the Amnesty report, the Qatar 2022 Supreme Committee, which oversees Qatar's World Cup plans, promised to release new "Workers' Welfare Standards" regarding recruitment, pay, housing and repatriation policies for foreign workers by the end of this year.

The standards, it said, will be "aligned with Qatari law and international best practice."

It said that it held a "productive discussion" with Amnesty International over the weekend about worker treatment, and agreed to continue talks in the run-up to the event.

The committee also said all contracts related to its projects will be enshrined in the Qatar 2022 Workers' Charter to protect workers' rights.

In response to Amnesty's allegations, the director of the Human Rights Department at Qatar's Foreign Ministry said laws are in place to protect workers from mistreatment

"In the event that the Ministry of Labor becomes aware that the employer has not adhered to the contract ... then it will take all legal means and measures against the employer," the agency wrote to Amnesty.