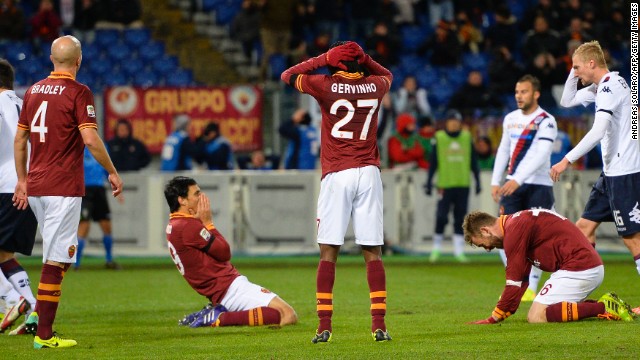 Roma players share the agony of a missed opportunity during the 0-0 draw against Cagliari at the Stadio Olimpico on Monday.
STORY HIGHLIGHTS

(CNN) -- Roma was unable to reclaim top spot in Serie A following a 0-0 draw Monday with Cagliari at the Stadio Olimpico.

The home side's third successive draw after 10 consecutive wins sees them maintain their unbeaten record in the league but means they are now one point behind Juventus who beat Livorno 2-0 on Sunday.

Rudi Garcia's men had plenty of chances to win the match against a Cagliari side who haven't won away from home all season, but were denied all three points thanks to a combination of sloppy finishing and some sturdy goalkeeping from Vlada Avramov.

The Serb denied Gervinho first with a save at the near post in the fifth minute and was on hand five minutes later to deny Brazilian defender Maicon.

Gervinho, who was returning after a month out with a hamstring strain, went closest in the half heading against the post from close range just before the break.

The frustration continued for home supporters in the second half as Avramov repelled all that Roma threw at him, including a late save from Leandro Castan's header.

"We didn't manage to score a goal but the man of the match was Avramov," Garcia told Sky Italia.

The result means Roma now have 33 points from 13 games while Cagliari have 14 points and remain in 14th place.

Meanwhile in the English Premier League, West Bromwich Albion drew 2-2 with Aston Villa in the Midlands' derby at the Hawthorns.

Striker Shane Long netted two fabulous early goals to put the home side in control before Villa fought back in the second half.

Long's first came in the third minute when he finished neatly following an exquisite pull down and switch of direction.

The Republic of Ireland striker doubled the lead eight minutes later in equally assured fashion latching on to a sloppy pass from Leandro Bacuna before jinking past defender Nathan Barker.

Long then coolly dinked his shot over the advancing keeper Brad Guzan with the ball going in off the underside of the crossbar.

But the second half belonged to the visitors. Karim El Ahmadi pulled one back in 67th minute before Ashley Westwood unleashed an unstoppable 25-yard drive to level the scores.

The draw keeps West Brom and Villa level with 15 points in 11th and 12th place respectively.

In La Liga's only fixture on Monday, Athletic Bilbao claimed a 2-1 win at Malaga. The win sees Bilbao stay in fifth with 26 points, one point behind fouth-place Villareal. Malaga remain in trouble in 14th with 13 points, one point above the relegation zone.