Jonathan Trott pulls out of Ashes tour with stress-related illness 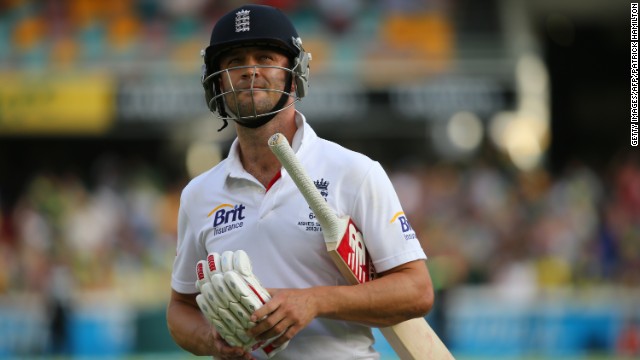 (CNN) -- Playing professional sport is many people's idea of the perfect job, but that doesn't mean sportsmen are immune to feeling the strain of working life.

Just ask cricketer Jonathan Trott, who has pulled out of England's tour of Australia because of a stress-related illness.

England lost the first Ashes test against Australia -- one of sport's great rivalries -- with batsman Trott scoring 19 runs in two innings when he struggled against Mitchell Johnson's fast bowling.

"I don't feel it's right that I'm playing knowing that I'm not 100% and I cannot currently operate at the level I have done in the past," said the 32-year-old Trott.

"My priority now is to take a break from cricket so that I can focus on my recovery. I want to wish my teammates all the very best for the remainder of the tour."

Compton on the Ashes

Sachin Tendulkar: The road to legend

England were beaten heavily in the first test -- the tourists suffered a 381-run defeat in Brisbane -- and Australian batsman David Warner labeled their batting "poor and weak."

Ashes series are traditionally characterized by gamesmanship and competitive verbal jousting -- known as "sledging" -- between the two sets of players.

"On the pitch it's pretty much a war, isn't it?" said England captain Alastair Cook after his side's comprehensive defeat.

"There are always going to be a few battles and a few words, but on the pitch is fine.

"There were a lot of things said that we think have been disrespectful, but you have to give the Aussies credit for how they played."

At one point in the match when James Anderson faced Johnson television stump microphones picked up Australian captain Michael Clarke telling the England bowler to "get ready for a broken f****** arm."

But Clarke defended the hostile verbal atmosphere that often goes on in a game.

"I'm not going to go into what's been said on the field - I think that's part and parcel of the game," said the Australian captain.

"I've heard a lot worse said on the cricket field than anything the Australian players or the England players have said throughout this test match.

"Both teams want to win so badly. We all respect the traditions of the game - there is a line, and both teams should not overstep that line.

"I'm sure there's plenty of things that are said on the field that you won't overhear on the stump microphone. There is certainly no single England player that we have any vendetta against."

Love Trotty. Absolute champion of a man. He knows he has all the support of all the people around him. Puts cricket in perspective

Trott is not the first England cricketer to pull out of a tour with a stress-related illness.

Batsman Marcus Trescothick left the 2005-06 India tour and the 2006-07 Ashes tour of Australia, while bowler Michael Yardy came home from the 2011 World Cup.

"Jonathan Trott is an incredibly talented cricketer who has proven himself time and again for England," said managing director England cricket Hugh Morris.

"The cricket side of things is unimportant now, all that matters is that Jonathan is given the time, support and space he needs to recover.

"We fully support his decision to leave the tour and the ECB will provide all the assistance we can to help Jonathan and his family through this period.

"Jonathan has asked for privacy while he recovers and I would urge everyone to respect that."

Many past and present sports stars were quick to rally round Trott.

"Feeling for Jonathan Trott," tweeted former Australian bowler Shane Warne. "I hope he and his family are left alone by all media & he's able to recover quickly & return to the Eng team!"

Former Manchester United defender Gary Neville tweeted: "Hope Trott is OK and back soon. Test Cricket is tough and we are going to see a major Ashes battle in the next few months."