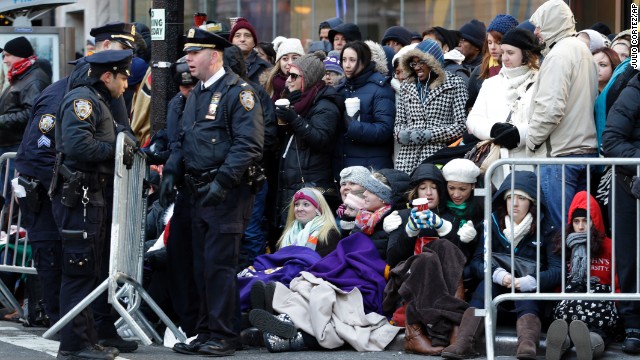 Police officers adjust a barricade as people wait in cold weather along the route of the Macy's Thanksgiving Day Parade on Thursday, November 28, in New York. 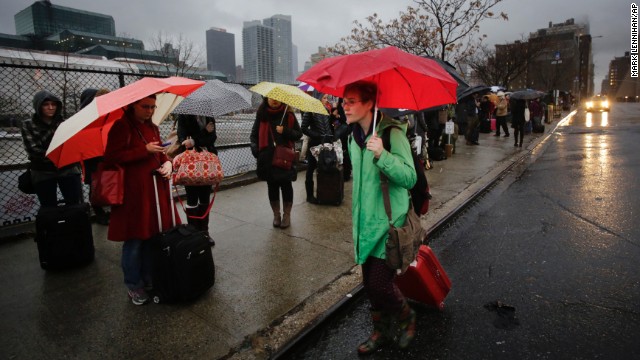 Passengers wait for a BoltBus to arrive during a light rain on Wednesday, November 27, in New York. A wall of storms packing ice, sleet and rain threatened to suspend holiday travel plans as millions of Americans took to the roads, skies and rails. 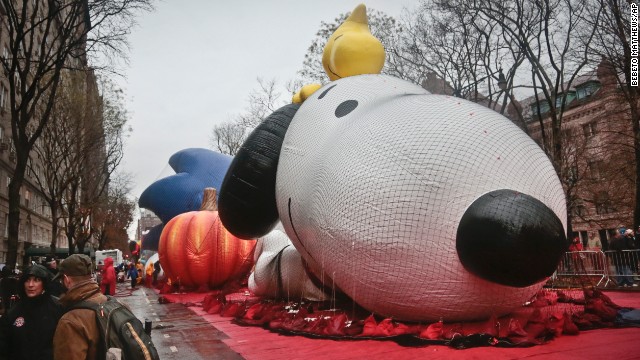 The Snoopy balloon for the Macy's Parade is partially inflated on Wednesday, November 27, in New York. High winds threatened to keep the balloons on the ground during Thursday's Macy's Thanksgiving parade. A colossal storm system that began in California complicated Thanksgiving travel plans all the way to the Atlantic, causing many transportation delays. 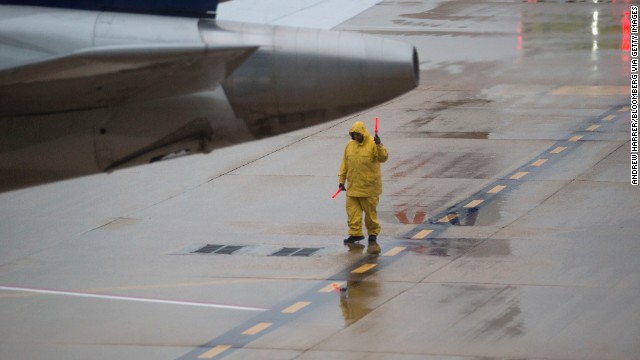 An employee signals a plane out of the gate at Ronald Reagan National Airport outside of Washington on Tuesday, November 26. 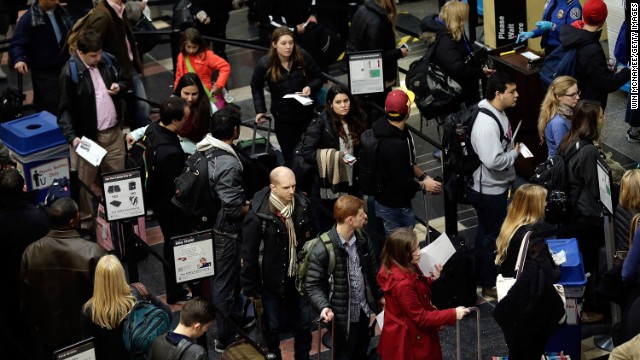 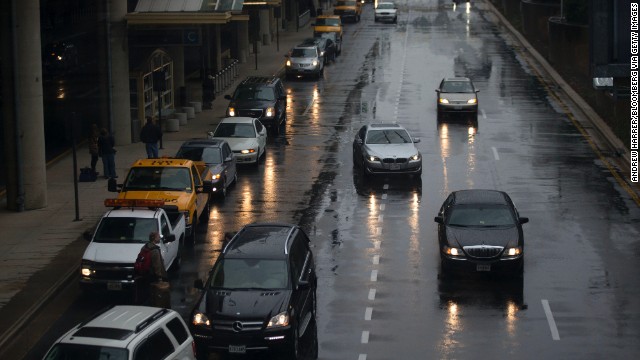 Vehicles pick up passengers in heavy rain at Reagan National Airport on November 26. 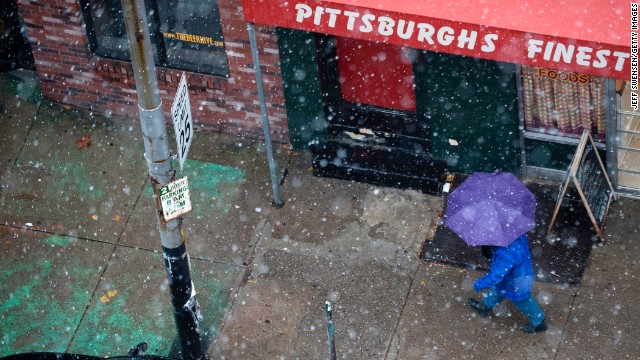 A pedestrian walks through snow showers along Penn Ave in Pittsburgh on November 26. 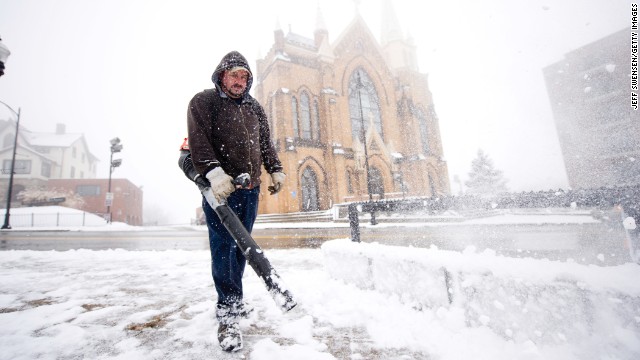 Mark Swigart uses a leaf blower to remove snow from the sidewalks November 26 in Pittsburgh. 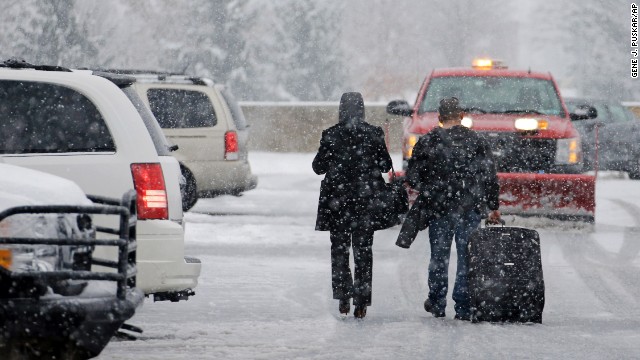 Holiday travelers make their way to their car on November 26 after arriving at Pittsburgh International Airport. 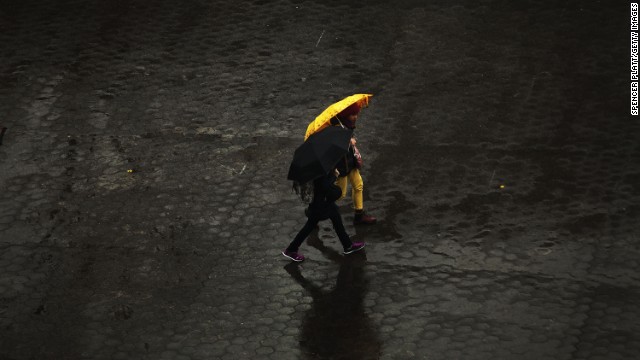 People walk in the rain through Union Square in Manhattan on November 26. New York was bracing for severe weather as the storm made its way east. 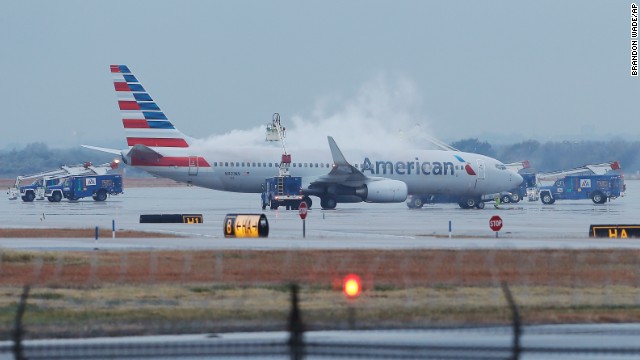 Employees at Dallas-Fort Worth International Airport de-ice a plane before departure on Monday, November 25. 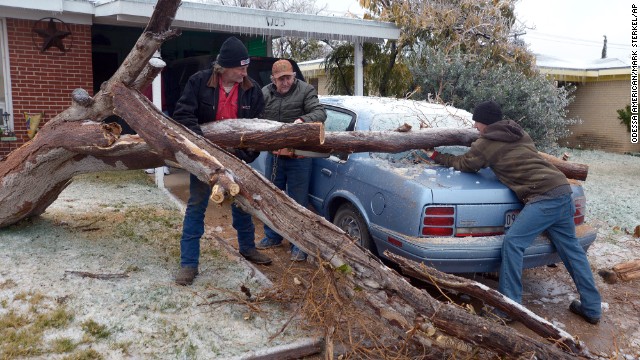 A fallen tree is removed from a car in Odessa, Texas, on November 25. 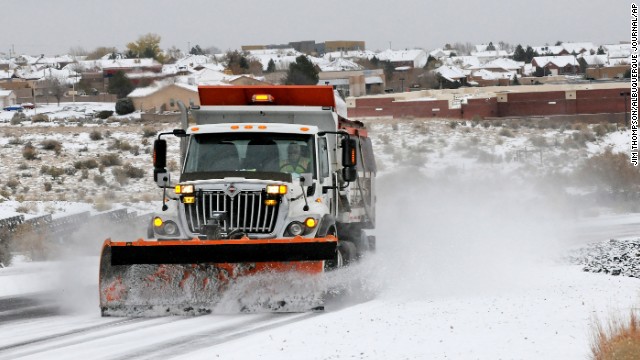 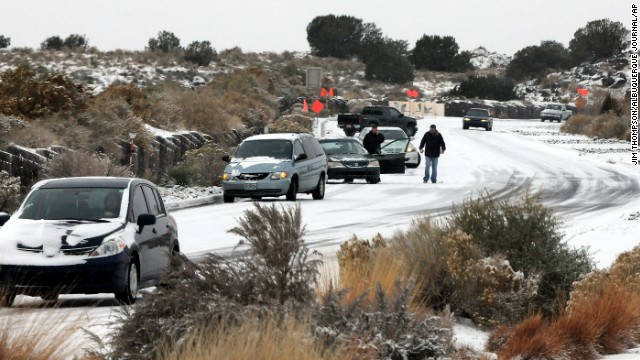 Are you in the grips of the wintry storm sweeping across the country? Please share your videos, pictures and stories at iReport.

Tuesday has been a mess for much of the East Coast. A massive storm that started in California soaked a huge swath from Florida to New England, with snow and sleet falling in pockets of Pennsylvania and New York.

That's because winds are forecast to pick up and sock densely populated places in the Northeast in the next day or so.

For drivers, big gusts mixed with drenching rains can slow things down any day. For air travelers, there is always a big trickle-down effect when places like New York's LaGuardia and Kennedy airports or those in Philadelphia and Boston experience wind delays.

Killer storm claims lives across the US

When this kind of stuff happens on one of the biggest travel days of the year?

Let's just say people along the East Coast may have many good reasons to give thanks this holiday season. But the weather likely won't be one of them.

The expected issues shouldn't overshadow what this storm has already done, and continued to do Tuesday.

The system started on the West Coast, proving its might from the get-go.

A 52-year-old man in Yuba County, California, died Thursday when a tree fell on top of a vehicle, a county sheriff's office said. Road conditions were blamed for the deaths of two people in New Mexico. Three people were killed in an icy pileup along Interstate 40 late Friday in northwest Texas. The weather also was blamed for four deaths in Oklahoma since late last week

Those were just some of the casualties from a storm that has led to more than 100 wrecks.

There was more where that came from Tuesday. One stretch of the the Pennsylvania Turnpike, about 20 miles east of Pittsburgh, saw a little of everything over the course of the day -- snow, rain, ice -- according to CNN's Shannon Travis.

Snow was the issue for cities and towns along the Appalachian Mountains, all the way down to West Virginia. Parts of upstate New York, including Buffalo and Syracuse, were seeing flakes on Tuesday night.

Still, it wasn't -- or at least won't be -- especially chilly everywhere.

The National Weather Service forecast temperatures to rise into the 50s during the night in Philadelphia and Boston.

But there, the temperature won't be the story so much as the wind speed. Sustained winds in New York -- where the thermostat should hit 55 degrees by 5 a.m. -- will reach 19 to 24 mph, with gusts blowing as strong as 55 mph. It will not be much better Thursday, when the forecast calls for breezes from the west at 21 to 24 mph, with more potent gusts.

Forget the rain: That wind could hamper the Macy's Thanksgiving Day Parade through the streets of Manhattan. The giant balloons that are the parade's trademarks -- featuring characters from Hello Kitty to Snoopy to the Pillsbury Doughboy -- won't soar if sustained winds exceed 23 mph that day, because of fears that the balloon handlers won't be able to control them.

"We have a sergeant assigned to each of the balloons," New York Police Commissioner Ray Kelly said. "They can be lowered all the way to the ground if the determination is made not to fly them."

Chances are no one will miss the gigantic balloon versions of Papa Smurf or Pikachu around the dinner table on Thursday.

But the same might not hold true for hundreds trying to fly out on airplanes over the coming days.

#ATL24: A day in the life of the world's busiest airport

As of Tuesday night, the weather's effect on flights was fairly minimal. As of 10:30 p.m., 158 flights had been canceled nationwide with another 84 scuttled Wednesday, according to the air travel tracking website Flightaware.com. The highest number of pre-Thanksgiving Day cancellations with 28 so far is northern New Jersey's Newark Liberty International Airport, the site says.

There is a possibility this situation could turn for the worst, quickly, leading to major delays if not more cancellations. CNN's meteorology unit estimates, if winds blow as forecast, New York metro area airports could see average delays of two to three hours, and Boston's Logan airport could be even worse.

This wouldn't just affect those flying in and out of those airports, or others like Washington's Dulles or Reagan that could be similarly affected. There's a ripple effect because of the logistics of carefully coordinated schedules and connecting flights that could affect many of the 3.14 million people that AAA projects will fly this weekend.

In expectation of such headaches, major airlines like Delta, U.S. Airways, JetBlue and United have already relaxed their policies by letting some customers change their reservations without a fee.

For them, the combination of strong winds and slick surfaces, even if they aren't coated with snow or ice, could lead to problems.

In other words, make a plan if you will be among these millions over the next few days, packing snacks and patience in case you come to a crawl. And, as always, drive safely.

Here are 10 facts about one of nature's most powerful forces.
Photos: Weather around the world
updated 10:46 AM EDT, Wed August 7, 2013

Get a glimpse of the weather events happening around the world by clicking through our photo gallery.
Keep your phone charged in a power outage
updated 5:57 AM EST, Sat February 9, 2013

In our increasingly digital world, a mobile phone or other portable device is often a one-stop communication device.
Staying safe when the lights go out
updated 7:39 PM EDT, Thu July 3, 2014

Water jugs and batteries are not the only things to consider when extreme weather threatens.
Food in a weather emergency

All you need to know about keeping your food safe to eat and what to have on hand in the event of a weather emergency.
7 mobile tools to help you survive tornado season
updated 10:53 AM EDT, Thu April 3, 2014

Getting the latest warnings when tornadoes are headed your way and knowing what to do before, during and after one hits are all key to staying safe. A handful of apps can help you stay on top of impending dangerous weather.
A tornado's heading your way: Now what?
updated 11:31 AM EDT, Thu May 30, 2013

You've just that heard a tornado is headed directly toward you. You don't have a safe room, and you're not near a shelter. Do you hunker down and hope for the best or do you flee?
The 10 deadliest U.S. tornadoes on record
updated 11:31 AM EDT, Sun April 27, 2014

Here are the 10 deadliest tornadoes to touch down in the United States, according to the National Oceanic and Atmospheric Administration:
In electrical storms, few safe places
updated 7:07 PM EDT, Wed July 17, 2013

A tornado is a funnel-shaped cloud that forms under thunderclouds and contains rapidly rotating air.