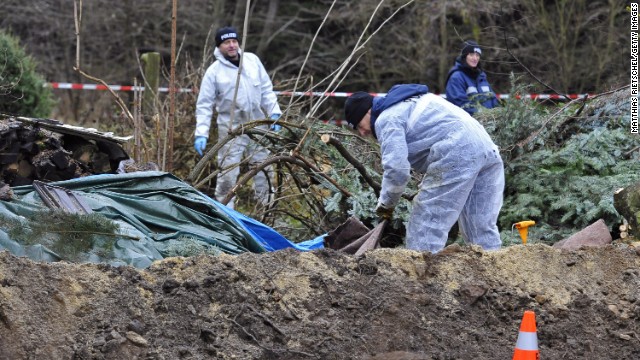 Forensics investigate in the garden of the suspected murderer on November 29 in Hartmannsdorf.
STORY HIGHLIGHTS

(CNN) -- Police in Dresden, Germany, say they have arrested a 55-year-old police officer on suspicion of murdering and butchering a man he met on a cannibalism website.

The two men met on Zambian Meat, an Internet chat forum where people discuss their sexual and cannibalistic fantasies. Text messages and online chats revealed that the 59-year-old victim from Hanover asked to be killed, police said.

Dresden Police Chief Dieter Kroll said at a news conference: "The victim had been fantasizing about being killed and eaten since his youth."

Marko Laske, a police spokesman, said: "Our investigations have just begun, and we cannot confirm rumors yet that the suspect has eaten parts of the victim or that it was a sexually motivated act." There is no evidence that the suspect ate body parts, and he denied doing so, Laske said.

The arrested man works for Saxony's State Office of Criminal Investigation in the forensics department. He was known as an "inconspicuous and normal colleague," police said.

Police did not name the suspect. German media are identifying him as "Detlev G."

After having been in contact for months through chat, e-mail, telephone and text, the men agreed to meet on November 4. They met at Dresden's main train station, police and prosecutors said, and shortly after went to a guesthouse in the Ore Mountains that belongs to the alleged killer. The police officer is believed to then have killed, tortured and dismembered the man, and buried his body parts on the land around his guesthouse.

The victim was reported missing in November. The police officer gave a partial confession by admitting that he killed the man from Hanover. He did not reveal his motive.

The police officer was arrested two days ago while on duty. "It is an utterly extraordinary case. For an unusual case with such wide repercussions, it will take a while to find out the truth about what really happened and why he did it," Laske said.

In 2001, Armin Meiwes was arrested for killing and eating a voluntary victim he met on the Internet. Meiwes posted an advertisement on the Cannibal Cafe website, looking for a young man for "slaughter and consumption." His victim, Bernd Brandes, reportedly agreed to be butchered alive before being killed and eaten.

Meiwes, who captured the killing on video, was convicted of murder and sentenced to life in prison.