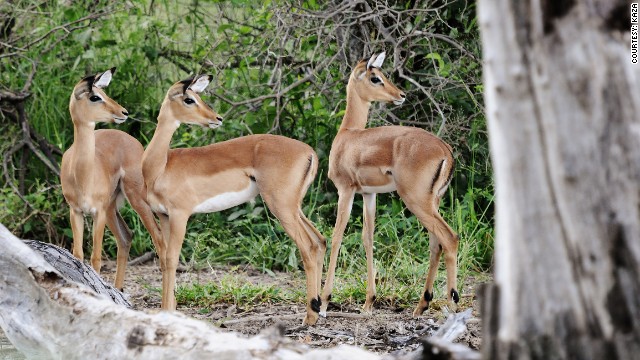 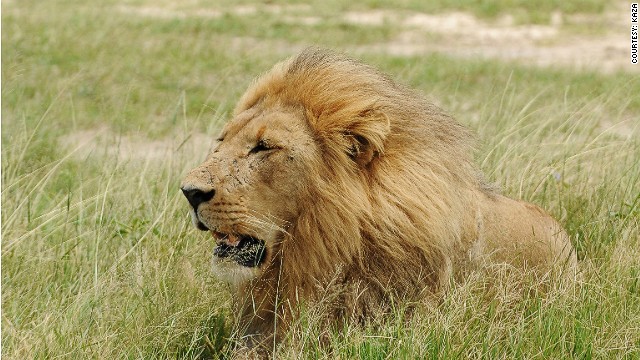 KAZA has been called "Noah's Ark" and is home to 200 different mammals including the "Big five" --leopards, rhinos, buffaloes, lions and African elephants. 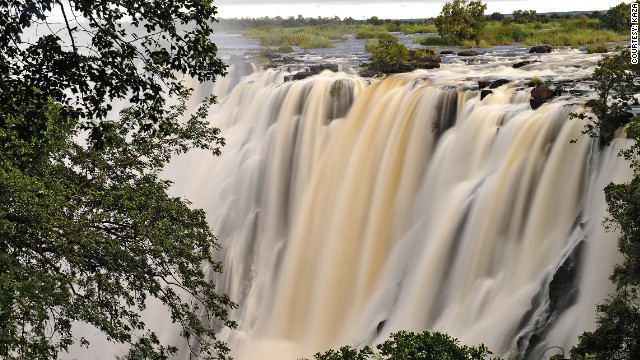 Victoria Falls, one of the seven natural wonders of the world and nearly 110 meters in height, lies on the border between Zimbabwe and Zambia, falling into the KAZA region. 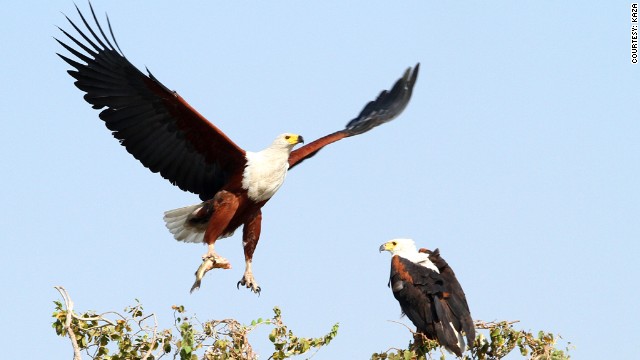 The Chobe National Park in Botswana is part of KAZA and has more than 650 species of bird, including the African Fish Eagle. 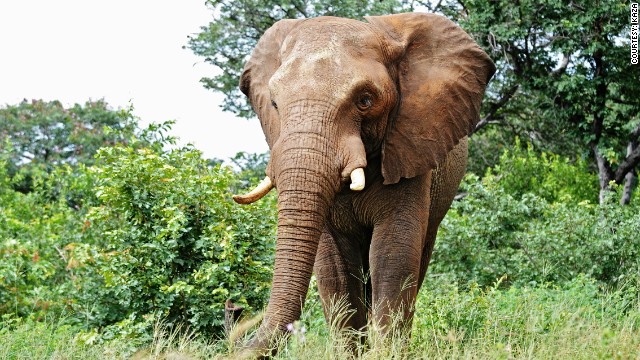 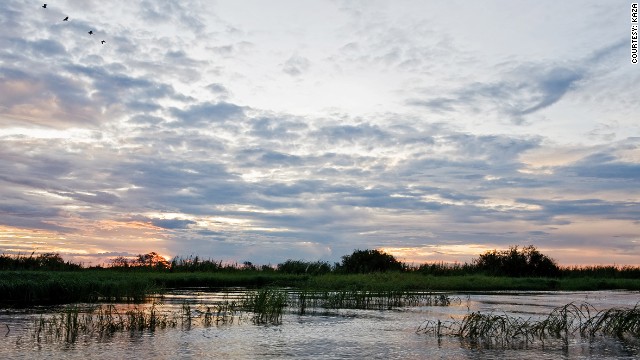 To preserve and protect the five nations' delicate ecosystems, the five member states are cooperating to pool resources and open borders. 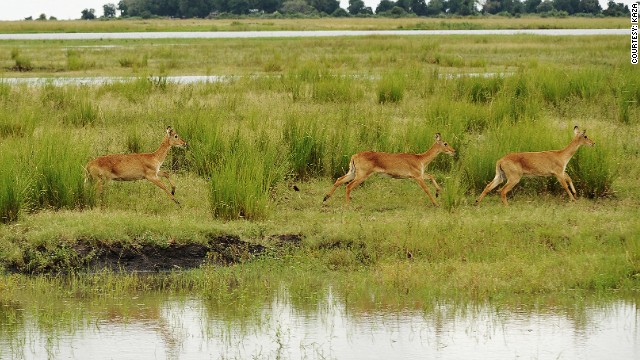 The next step will be to introduce a "KAZA visa" -- a single visa giving tourists access to the entire KAZA area across five countries. 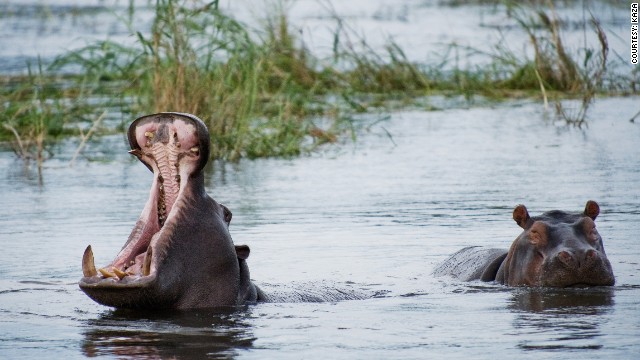 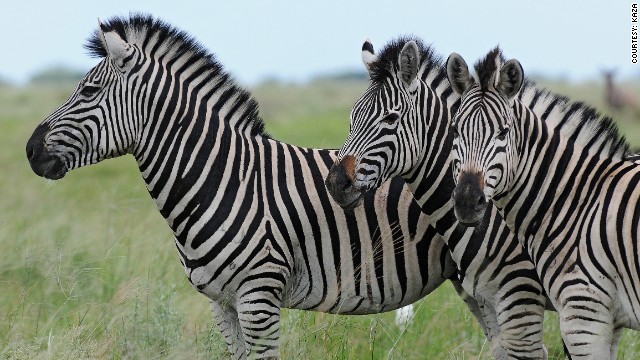 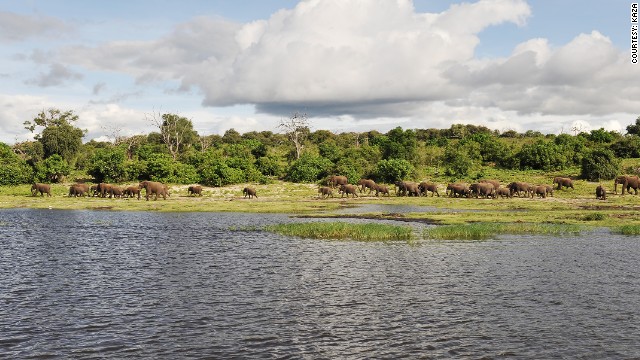 Drifting through the savannas, torrents of water wind-off into a sunlit horizon; cheetahs stalk their prey as flocks of gazelle prance through the long, parched grass; and African elephants traverse hundreds of miles in search of greener pastures and fresh watering holes.

Poniso Shamukuni, a professional guide at Botswana's Chobe Park, said the country's environment and wildlife is like no other.

An oasis of wildlife, located in northern Botswana, Chobe is part of an international conservation region in southern Africa, spanning five countries and nearly 440,000 square kilometers. The Kavango Zambezi Transfrontier Conservation Area -- known as KAZA -- is a partnership between Angola, Zimbabwe, Zambia, Botswana and Namibia.

Twice the size of the UK and larger than Germany and Austria combined, KAZA is considered the world's largest wildlife preservation. The area draws tourists from all over globe and is also home to Victoria Falls, one of the seven natural wonders of the world, located on the border of Zimbabwe and Zambia. 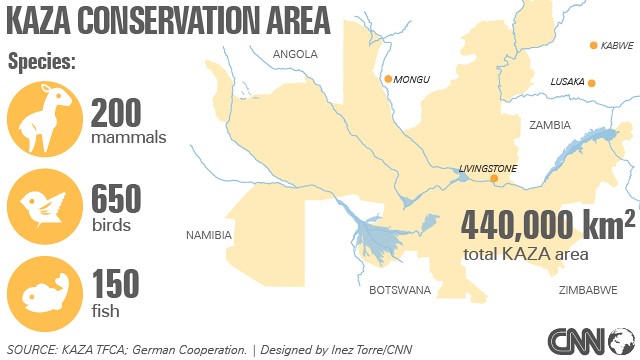 To protect the region's natural beauty and attract tourists and investors worldwide, international cooperation between the five countries aims to pool resources to preserve each nation's delicate ecosystem while also opening borders.

Elephants slaughtered from the sky

But visa restrictions mean that traveling between countries is an exasperating and tricky affair for visitors.

But Dipotso is confident member governments can eventually come to an agreement.

He said: "The KAZA visa is meant to have a one-stop shop where you get your visa and then you can easily travel to Angola ... Namibia, Botswana, Zambia and Zimbabwe."

The organization is now working with Zimbabwe and Zambia on a pilot visa. Dipotso added: "We expect the pilot to be completed by end of February 2014."

An international pact would allow visitors to experience the full extent of Africa's natural wonders.

Tourists visiting KAZA can see the continent's "Big Five" of leopards, rhinos, buffalo, lions and the world's largest population of African elephants, as well as 650 different species of birds and 160 types of fish. 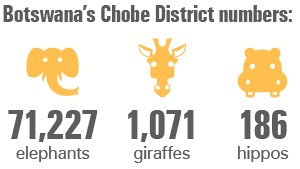 Shamukuni, who leads expeditions into the park every day, said: "October and November are the biggest months, that is when we see a lot of tourists coming just before the rainy season."

Covering 36 protected areas, KAZA also plays a vital role in the war against poaching as the organization seeks to engage and employ local communities in return for preserving the wildlife.

Dipotso said KAZA has a good chance of being successful in the future because of the area's lack of mineral wealth, meaning few international disputes over territory are likely to arise.

Botswana is a very safe country... our economy is doing well. We're politically stable and lots of tourists want to go to the places where they feel it's safe.
Poniso Shamukuni, Chobe Park guide

He added: "Currently there are no minerals; minerals sometimes take priority over conservation."

Dipotso said that tourists, predominantly from Europe and Asia, have nothing to fear when it comes to past political turmoil or violence in member KAZA countries, notably in Angola and Zimbabwe.

He added: "Things are quite calm... throughout the KAZA Partner countries; perhaps there has not been proper communication on the stability of the region."

Read more: Helicopters versus drones: the cost of Rhino warfare

Botswana in particular is considered one of the most stable and safe countries for tourists in Africa. The country has a blossoming economy and financial services industry with GDP per capita -- an indicator of a country's living standard -- one of the highest in Africa.

"Botswana is a very safe country," he said. "As a country our economy is doing well. We're politically stable and lots of tourists want to go to the places where they feel it's safe."