These shimmering LED installations transport you to an alternate universe 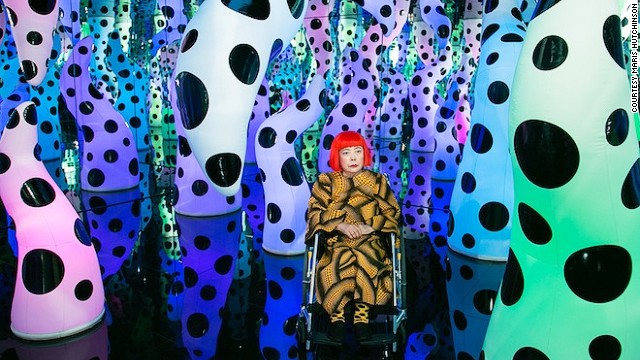 Japanese artist Yayoi Kusama, who has been living in a mental institution since the 1970s, has used her struggle with mental illness as inspiration for her work. Here she is pictured inside her Love Is Calling infinity room. 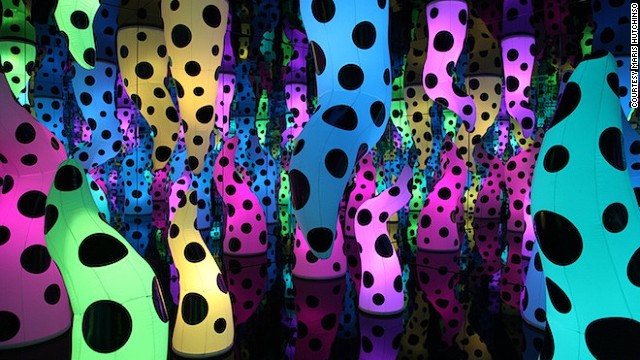 In Love is Calling, the mirrored room is illuminated by inflatable, tentacle-like forms. Polka-dots have been an obsession for Kusama for as long as she has been an artist. They are plastered across her paintings, on her clothes, and incorporated into her infinity rooms. 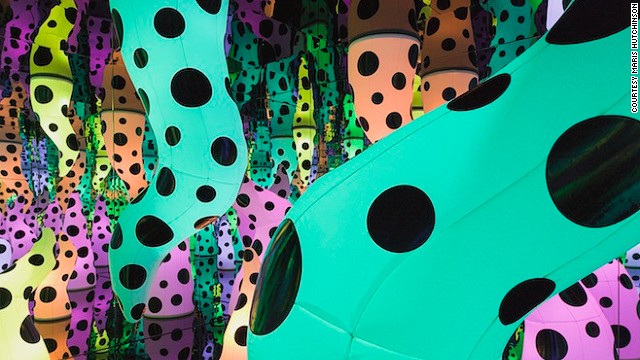 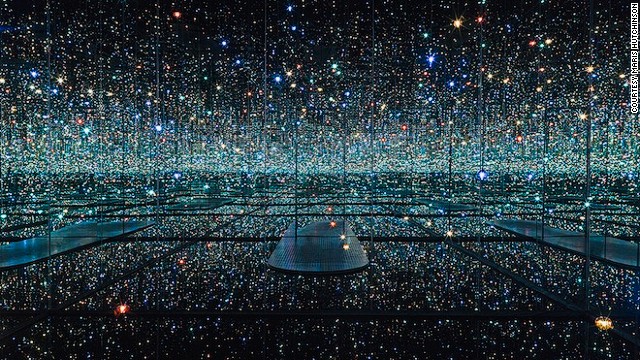 The Souls of Millions of Light Years Away (2013) is Yayoi Kusama's newest infinity mirrored room. Multi-colored LEDs dangle from the ceiling at varying lengths. 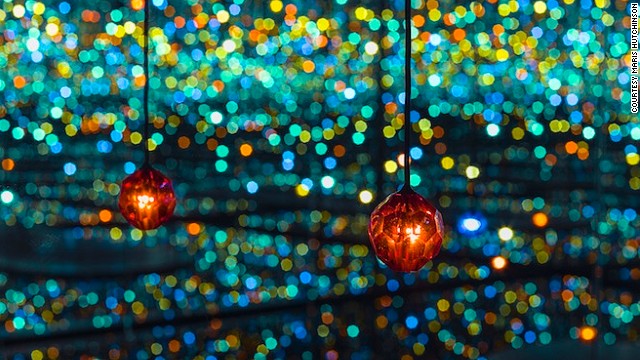 The lights reflect off the mirrored walls and shallow pool on the floor in a strobe light pattern that repeats itself every 45 seconds. 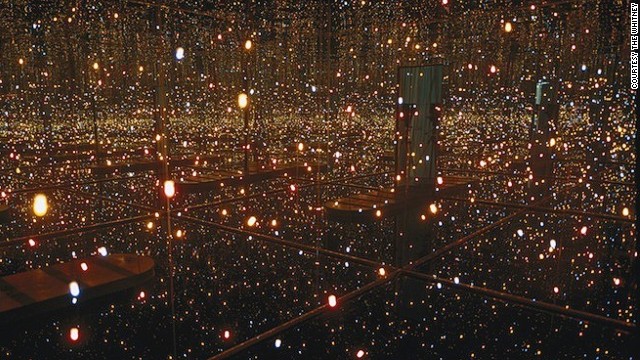 The Whitney recently showed Fireflies on the Water (2002), another of Kusama's infinity rooms 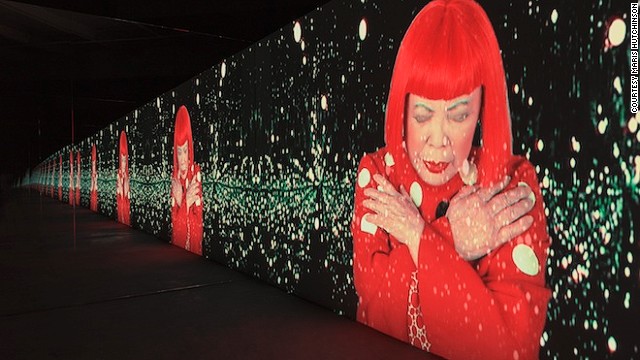 Manhattan Suicide Addict is a video installation that shows Kusama performing a song that she wrote. 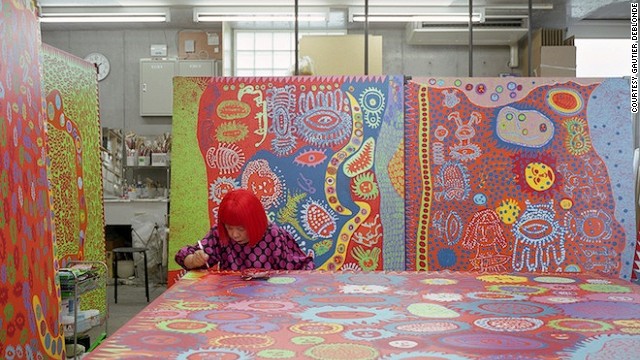 (Wired) -- Walking into one of Yayoi Kusama's infinity rooms is like walking into a completely different universe. The door shuts behind you, and suddenly you find yourself surrounded by what appears to be a galaxy of shimmering LEDs. The scene is beautiful, in a surreal, space-age fairy tale sort of way.

But it's also a little jarring in its intimacy; it's almost as though you've been instantly transported from a whitewashed gallery into Kusama's buzzing, obsessive mind.

It's a strange place to inhabit, if only because you get the sense that what goes on inside Kusama's mind is very different than what's happening inside, say, your neighbor's, or your colleague's. The Japanese artist has lived in a Japanese mental institution since the 1970s, when she checked herself in after a particularly stressful stint in New York City.

But Kusama's struggle with obsessive compulsive disorder and other mental anguishes is not a shameful secret. In fact, it's the opposite.

Kusama says the kaleidoscopic rooms are her attempt to investigate death and infinity.
Liz Stinson

Kusama's mental woes fuel her work, with her obsession and compulsion manifested in her exaggerated use of shapes, colors and mirrored rooms. For as long as Kusama has been an artist (she's currently in her mid-80s), she's been obsessed with polka-dots. A result of hallucinations she's had since childhood, the shapes are plastered across her paintings, on her clothes, and incorporated into her trippy infinity rooms.

It's not hyperbole to say they are everywhere. Including her newly opened show at the David Zwirner Gallery in New York City.

In "I Who Have Arrived in Heaven", Kusama continues the motif with 27 new paintings and two infinity rooms, all covered in dots of varying shapes and sizes. The colorful large-scale paintings covered in eyes and dots are beautiful works in their own right, but the real reason most people will trek to the Chelsea gallery and wait in the 4-hour line is to see Kusama's brilliant mirrored infinity rooms.

Kusama has been making these magical boxes since the 1960s, when she first lined a small room with mirrors and filled it with polka-dotted phallic shapes, creating what I like to imagine a brothel in the Dr. Seuss universe might look like.

Her newest room, "The Souls of Millions of Light Years Away," is more along the lines of her beloved "Fireflies on the Water," a mirrored infinity room that showcased hundreds of warm-hued LEDs at the Whitney last year.

In her new room, Kusama has again suspended multi-colored LEDs from the ceiling at varying lengths that reflect off of the mirrored walls and shallow pool on the floor in a strobe light pattern that repeats itself every 45 seconds.

Just down the street at the gallery's connected space is another infinity room, "Love Is Calling, which this time is filled with brightly colored inflatable sculptures covered in polka dots that shoot up from the floor and hang from the ceiling like technicolor tentacles.

The artist says the kaleidoscopic rooms are her attempt to investigate life, death and infinity, and if you're prone to existential pondering, it's easy to see that connection. Contemplating the infinite does have a way of drudging up those "what's it all mean?" feelings.

But for most people, being inside Kusama's glimmering universe is simply a brief reprieve from a dulled world they left on the other side of the door. For a moment, you can almost forget about the line waiting outside, the 360 degrees of mirrors and ultimately, yourself. But just for a moment—because there's no way you're leaving without taking a selfie.

How a Math Genius Hacked OkCupid to Find True Love

The Most Amazing Images NASA Took of Earth From Space