Sochi 2014: Russia to set up protest zones at Winter Olympics 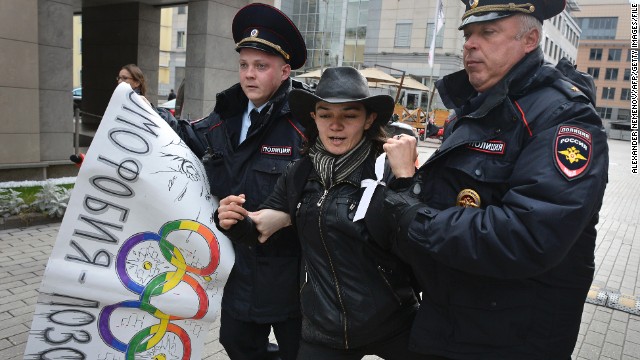 (CNN) -- The Sochi 2014 Winter Olympics will feature designated public zones where protestors will be able to demonstrate, the International Olympic Committee (IOC) has announced.

IOC president Thomas Bach told reporters in Lausanne, Switzerland that organizers of Russia's first Winter Games had agreed to set aside areas similar to ones previously seen at Vancouver 2010 and the 2008 Summer Games in Beijing.

"We welcome the announcement of the [Sochi 2014] Organizing Committee that in Sochi there will be protest zones that will be established for people who want to demonstrate against something," said Bach, who replaced former president Jacques Rogge in September.

"(Protestors) will have the opportunity to do so in special protest zones. This was under discussion with the IOC for quite some time. It was announced to us today (Monday) and it will be located in Sochi."

Russia's suitability to host the Games has been called in to question following the country's introduction of anti-gay propaganda laws earlier this year.

Russian officials have given assurances that the laws, which bars the public discussion of gay rights and relationships anywhere children might hear it, will not affect athletes or international tourists heading to the Games.

On Monday, German president Joachim Gauck became the first major political figure to announce he will not be attending the Games.

German newspaper Der Spiegel reported Gauck made the decision in protest against human rights violations and the harassment of Russian opposition political figures, although those claims were denied by his office.

Gauck's fellow German Bach also questioned whether the president's decision was an act of protest.

"On a personal note I know President Gauck is a very straightforward man. If his decision would have any political motivation he would have said this. He cannot travel to the country without an earlier state visit.

"I know him a little bit. He knows how to use the words and if he had something to say he would have said it."

Another senior politician who will not be at the Black Sea resort is Viviane Reding, the European Union Commissioner for Justice, Fundamental Rights and Citizenship.

The Luxembourgian tweeted: "I will certainly not go to Sotchi (sic) as long as minorities are treated the way they are under the current Russian legislation."

The IOC will warn athletes against taking part in any protests or demonstrations during the Games, which begin on February 7.

Rule 50 in the Olympic Charter, which governs the Games, says: ''No kind of demonstration or political, religious or racial propaganda is permitted in any Olympic sites, venues or other areas.''

''We will give the background of the Rule 50, explaining the interpretation of the Rule 50 to make the athletes aware and to assure them that the athletes will be protected,'' Bach, who won a gold medal in fencing in 1976, told the Associated Press earlier this week.

''As an athlete you do not want to be confronted in the Olympic Village or the Olympic Stadium with any kind of political controversies.''

The IOC's stance has drawn the ire of tennis legend Martina Navratilova. The Czechoslovakian-born American, who came out as gay in 1981, criticized the IOC "for really putting their head in the sand" over the issue of Russian law.

"The IOC needs to stand up better for their athletes quite frankly," she told reporters at the United Nations, where she was speaking to mark International Human Rights Day.

The IOC denied Navratilova's claims, saying it is against all forms and discrimination. It also said it has no place commenting on one country's laws.

"The IOC is 'standing up for athletes' by making sure that the Olympic Charter is respected by all participants at the Games and ensuring there will be no discrimination on grounds of race, sex or sexuality," the organization said in a statement given to CNN.

"We cannot intervene in the laws of individual countries -- we leave that to governments and the relevant international organizations such as the United Nations."