Bus falls off freeway, kills at least 18 in Philippines 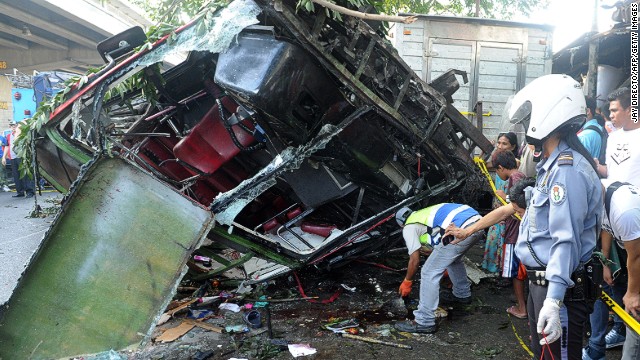 A highway patrol officer collects passengers' belongings from the bus that fell from an elevated highway in Manila.
STORY HIGHLIGHTS

(CNN) -- At least 18 people died after a bus plunged off an elevated freeway in the Manila area early Monday and landed on a van, authorities said.

The accident happened around 5:15 a.m. (4:15 p.m. Sunday ET) on the Skyway in the suburb of Paranaque City, the official Philippines News Agency (PNA) reported.

In addition to the deaths, at least 16 other people, including the bus driver, were injured, CNN affiliate ABS-CBN reported, citing the Philippine National Police.

Images from the scene showed the mangled wreckage of the red bus lying on the road where it landed.

The cause of the accident was still under investigation, PNA quoted Skyway official Luis Panganiban as saying.

Authorities have suspended the entire fleet of the company that operated the bus, the Don Mariano Bus Company, PNA reported, citing the Land Transportation Franchising and Regulatory Board (LTFRB).

The driver of the bus that went off the elevated freeway, Carmelo Calascas, will have to take drug and alcohol tests, the LTFRB said. And the drivers of Don Mariano's other 78 vehicles are being ordered to undergo retraining, it said.