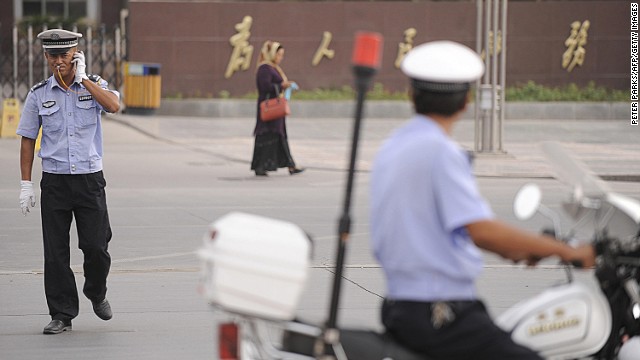 Chinese policemen on patrol in this file photo taken in Kashgar, a city in China's volatile western region of Xinjiang.
STORY HIGHLIGHTS

Two police officers chasing suspects came under attack late Sunday from people with machetes and explosive devices in Shufu county, near the city of Kashgar, said Tianshan, a news website run by the Xinjiang government.

In the clash that ensued, two police officers died and 14 "gang members" were shot and killed, Tianshan reported.

Deadly unrest frequently breaks out in Xinjiang, a large, resource-rich region that is home to the Uyghurs, a Turkic-speaking, predominantly Muslim ethnic group.

The arrival of waves of Han Chinese people over the decades has fueled tensions with the Uyghurs. Chinese authorities have cracked down heavily on violence involving Uyghurs, deepening resentment.

The details of violent clashes in Xinjiang often remain murky. Uyghur diaspora groups, like the World Uyghur Congress, have criticized the Chinese government for the lack of transparency over such events.

Police have detained six suspects, Tianshan reported in an update late Monday. It described the violence as "an organized and premeditated terrorist attack" carried out by a gang of 20 people, led by a person it named as Hesen Ismail, a Uyghur-sounding name.

But the World Uyghur Congress disputed the government's account. It cited unidentified "sources on the ground" who told it that the 14 people shot and killed were Uyghur "demonstrators."

Two of them were teenagers who were killed by "indiscriminate shooting by the security forces," the organization alleged.

Luo Fuyong, a spokesman for the Xinjiang government, contested the World Uyghur Congress's version of events. He said that no teenagers were killed in the violence and that those involved weren't demonstrators, noting that the clash took place at 11 p.m.

He said he believed that all 14 people who were killed by police were Uyghurs.

CNN wasn't able to independently verify the different claims about what happened.

Chinese authorities have blamed Uyghurs for a vehicle attack in Beijing's Tiananmen Square in October that killed five people -- including the three in the vehicle -- and wounded 40 others.

Xinjiang's worst violence in decades took place in July 2009, when rioting in the capital, Urumqi, between Uyghurs and Han Chinese killed some 200 people and injured 1,700. That unrest was followed by a crackdown by security forces.

Several deadly clashes have been reported this year.

Xinjiang is now home to more than 8 million Han Chinese, up from 220,000 in 1949, and 10 million Uyghurs. The newcomers take most of the new jobs, and unemployment among Uyghurs is high.

They complain of discrimination and harsh treatment by security forces, despite official promises of equal rights and ethnic harmony.

Beijing accuses some Uyghur groups of trying to establish an independent state.