(CNN) -- Evander Holyfield has faced many difficult opponents in the ring -- but nothing quite like this.

The former heavyweight world champion has teamed up with colorful Canadian businessman and philanthropist Yank Barry to help Syrian refugees in Bulgaria.

Barry, once the lead singer of The Kingsmen, shot to fame briefly in 1963 with the single "Louie Louie." He went on to become a music producer before turning his focus to international aid and diplomacy.

The U.N. estimates about 5,000 Syrians have asked for asylum in Bulgaria. About 1,200 mostly Syrians live cramped inside containers and tents at the Harmanli camp near Bulgaria's border with Turkey.

On a foggy Sunday morning, I accompanied the pair on a drive from the capital, Sofia, to the camp, about 170 miles away.

As soon as we arrived, Holyfield and Barry were surrounded by hundreds of refugees angry at camp conditions in Bulgaria. The pair planned to deliver food aid and to help resettle some families in a home supplied by Barry's charity, Global Village. 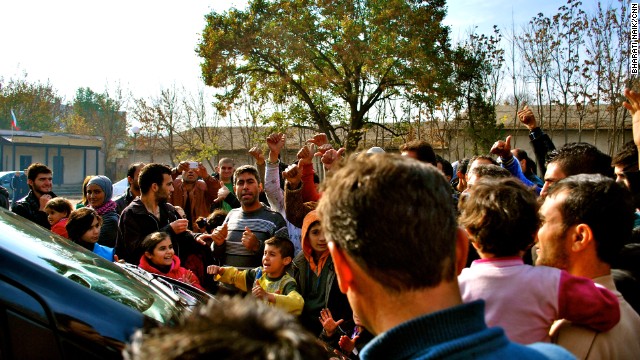 Evander Holyfield and Yank Barry were surrounded by hundreds of refugees angry at conditions in the Harmanli camp, near Bulgaria's border with Turkey. 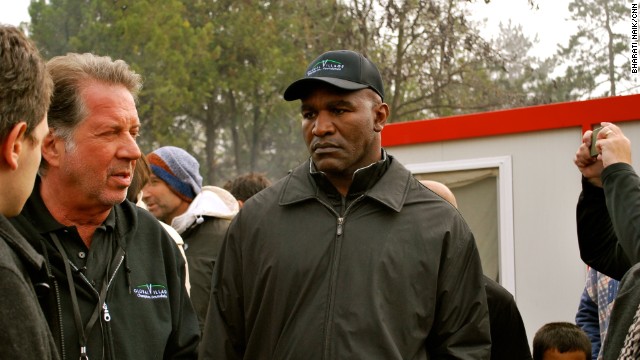 The former heavyweight world champion has teamed up with the colorful Canadian businessman and philanthropist to help Syrian refugees in Bulgaria. 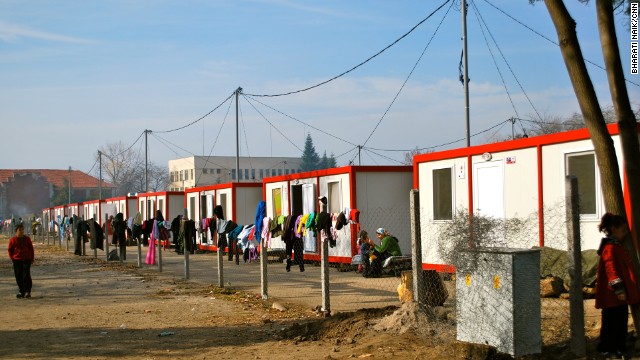 More than 100 people try slip into Bulgaria every day, border police say; most are the fleeing the fighting in Syria. They pay smugglers as much as $1,500 to take them. 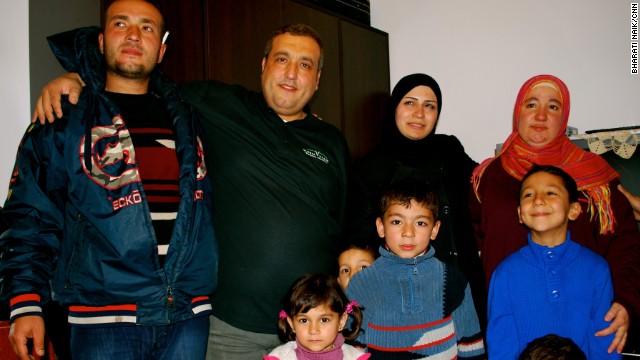 Two brothers, Mohammed and Noor, were separated during the war, but have been reunited in Bulgaria, after nearly a year. 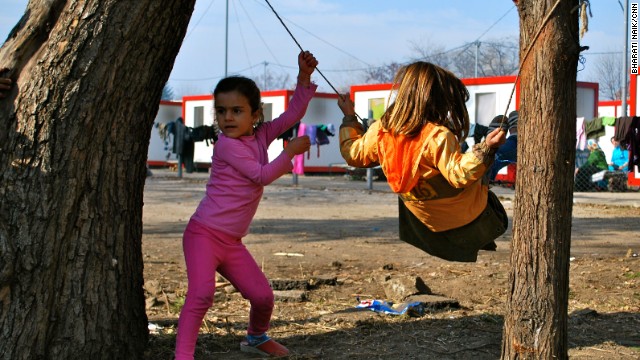 The U.N. estimates about 5,000 Syrians have asked for asylum in Bulgaria. 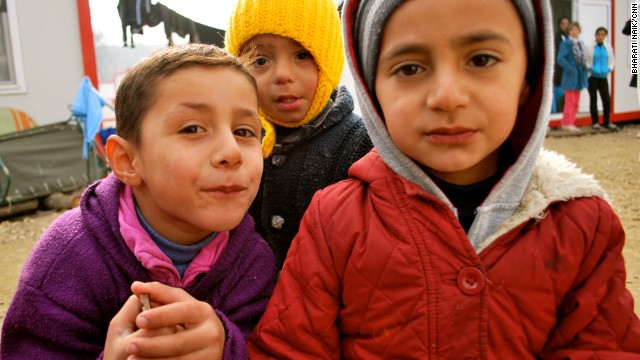 About 1,200 mostly Syrians live cramped inside containers and tents at the Harmanli camp near Bulgaria's border with Turkey. 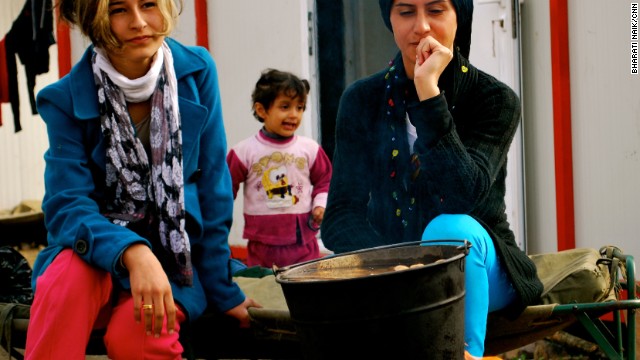 The UNHCR says it is trying to get more help for Bulgaria from the European Union. 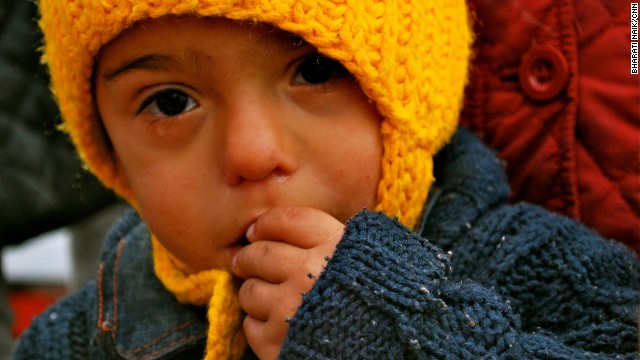 Syrians are increasingly seeking refuge in Europe. They arrive in the south, but most try to apply for asylum in the richer north - if they can reach it. 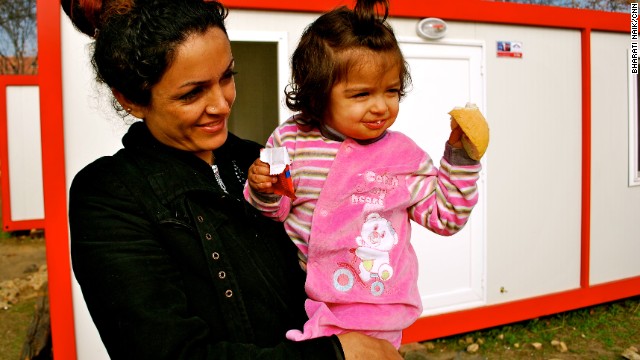 One refugee woman asked: "Why don't you do more to help us?"

Barry replied: "Since last year I've delivered 5,000 tons of food to camps. I'm a private individual. We now have a hotel and we are bringing families."

The woman persisted: "What about the rest of us?"

Holyfield and Barry's recent aid mission was not supposed to be like this. In midst of the chaos, Barry said to Holyfield: "We can't blame them for being angry. But they have to understand. We are a private foundation."

The refugees questioned why more was not being done to help them.

Visibly annoyed, Barry said: "Wait a minute! Time out! We got here 15 minutes ago. Now have a little bit of patience before I lose my patience. And we take our food and don't take anybody!"

That did not appease the refugees. Instead, they held up their thumbs, chanting "fingerprint" -- their way of demanding to be documented as refugees and then released from the camp.

"I wouldn't refuse food if I was hungry. If they can't handle it, let's go," Barry said as he got back into the car.

They managed to sneak two families out and meet them at a nearby gas station. Barry offered to place them in a converted hotel with other Syrian refugees for up to a year. But Barry has more ambitious plans. He told us he would be meeting President Bashar al-Assad within a few weeks.

"We know he's killed some of his own people. But then so did Mubarak. So did Gaddafi. So did Saddam," Barry explained.

When asked why he would have more success than others in reaching out to Assad, Barry said: "I know he loves Louie Louie. It's my song. I sang it and I'll sing it to him. I'm going with Evander and possibly Mike, Mike Tyson. He, Assad, is a big boxing fan. And we're not politically involved."

It's dark by the time we reach our next destination -- the hotel that Barry is using to rehouse refugees. There is already one family inside.

When the new arrivals walk through, tears start to flow as Mohammed recognizes his brother, Noor. He hasn't seen him in nearly a year.

"Hey Noor, you know this man? It's your brother!" Barry says enthusiastically.

"Your heart skips a beat and I was crying probably as much as he was," he tells me. "I saw Evander had a tear in his eye."

When I ask Holyfield why this mission is important to him, he says: "Because at some point in time, when you leave this earth, they won't be asking about how many championships I won. They'll say: 'What did you do for the least of them?' I can say I was in Bulgaria, I was in Russia, I was in the Philippines."

Barry says he is already looking for another hotel to house more refugees.

But with so many needing help, they may not be able to reach as many as they hope. 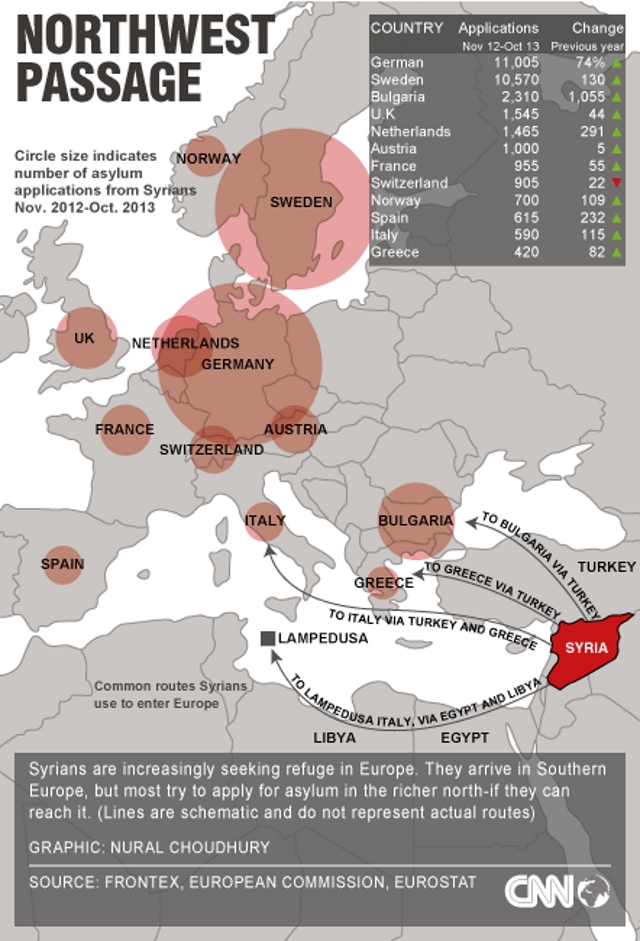 Which countries recieve the most Syrian refugees?

More than 100 people try slip into Bulgaria every day, border police say, most say they are the fleeing the fighting in Syria. They pay smugglers as much as $1,500 to guide them in.

"The amount refugees pay varies according to the number of people trying to cross the border. If the group travels only to Bulgaria, the price they pay to traffickers is much lower. If Bulgaria is only a transit point, however, the price can go much higher," George Kalaydjiev, Director of the board in Svilengrad city explains.

Bulgaria is one of the poorest countries in Europe. And this, Bulgarian officials say, is the best they can do.

The UNHCR says it is trying to get more help for Bulgaria from the European Union. The U.N. says more than 62,000 Syrians have applied for refugee status across the EU.

"But we cannot forget these people have suffered enormously. It's unacceptable that they go on suffering once they reach the EU," U.N. High Commissioner for Refugees António Guterres said recently during a trip to a refugee camp in Sofia.

Bulgaria is now building a wall along the most thickly-forested section of Bulgaria's border with Turkey, in an attempt to keep people out.

But Syria's refugees are desperate. And with or without a wall, Bulgaria remains the doorway to Europe.

Jihadists have kidnapped over 140 Kurdish boys to "brainwash" them. But a few boys made a daring escape.
Syrian warplanes reportedly strike Iraq
updated 8:48 AM EDT, Thu June 26, 2014

At the start of Syria's civil unrest, Omar would rally against the government alongside his schoolmates, later taking to the streets in his hometown of Salqin.
Could Western Jihadists join ISIS?
updated 5:17 PM EDT, Mon June 23, 2014

Atika Shubert looks at the rise of European jihadists traveling to Syria and whether they soon could join ISIS in Iraq.
Declared chemical weapons gone
updated 10:53 AM EDT, Mon June 23, 2014

The final stockpile of Syria's chemical weapons has been shipped out of the country, according to the OPCW, the Organisation for the Prohibition of Chemical Weapons.
Did U.S. leave vacuum for Iran, Syria?
updated 4:25 PM EDT, Wed June 25, 2014

The US isn't doing airstrikes in Iraq. Is there a vacuum for Syria and Iran to step in? CNN's Fareed Zakaria weighs in.
Syrian rebels take fighting underground
updated 4:04 AM EDT, Tue June 10, 2014

CNN's Nick Paton Walsh returns to the besieged rebel areas of Aleppo, a pale skeleton of a city that has had the life bombed out of it.
How fair can a vote be in a war zone?
updated 7:51 AM EDT, Mon June 2, 2014

Syria may be embroiled in a brutal three-year civil war, but that's not stopping the government from holding presidential elections.
EXCLUSIVE: ISIS uses Twitter to recruit
updated 7:23 AM EDT, Tue June 3, 2014

The three-year war in Syria has claimed 162,402 lives, an opposition group said Monday, as the raging conflict shows no signs of abating.
U.S.: Jihadi grew up in Florida
updated 9:41 PM EDT, Fri May 30, 2014

Official: The U.S. believes a jihadi featured in a suicide bombing video in Syria is Moner Mohammad Abu-Salha who grew up in Florida.
Wife to terrorist wannabe: 'Go die'
updated 10:37 AM EDT, Tue May 20, 2014

For the first time, Britain has convicted someone of a terrorism offense related to the Syrian civil war.