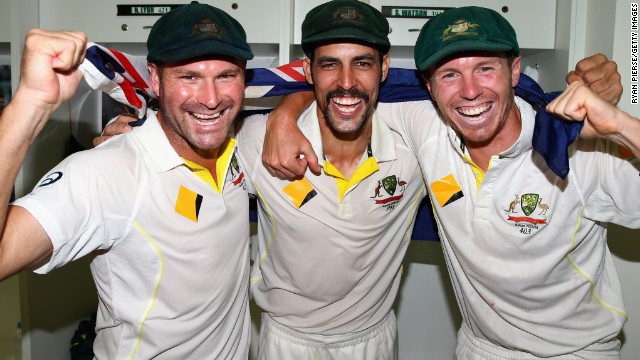 (CNN) -- Australia has won the Ashes -- now it wants to rub salt in English wounds by pulling off a whitewash.

Tuesday's victory in Perth gave Australia an unassailable 3-0 lead with two games remaining -- two games in which it will attempt to exact revenge on an England side which has dominated the Ashes in recent years.

Having lost the previous three Ashes series, Australia was expected to put up a brave fight against an England side which triumphed 3-0 on home soil only a few months ago.

Instead, it produced a performance full of courage, vigor and quality -- blowing England away with a level of cricket which simply proved too aggressive and intense for the touring side.

Compton on the Ashes

Tendulkar on career, family and future

Sachin Tendulkar: The road to legend

Victory in Perth by 150 runs ensured the Ashes urn returned to Australia after a 1,577 day absence and left captain Michael Clarke with even more reason to celebrate his 100th Test match appearance.

"This is a special feeling," Clarke told reporters after sealing his first Ashes series win as skipper.

"You won't find one guy in the changing room, player or support staff, who won't say this is the pinnacle, playing Test cricket against England.

"We will turn up in Melbourne 100% ready to go and be doing everything we have done in the first three Test matches."

Australia will now be aiming to produce a repeat of the 2006-7 series when it defeated England 5-0 in a humiliating whitewash.

That defeat signaled a period of introspection into English cricket with the publication of the Schofield report -- a 19-step guide to improving the national team.

In August 2011 it became the top ranked side in Test match cricket -- but it has struggled since being replaced by South Africa at the summit in 2012.

Its 2013 3-0 home victory over Australia was far from convincing with England's batsmen coming in for particular criticism.

The team's failings, particularly with the bat, have been greatly exposed by an Australian side led by the fast bowling of Mitchell Johnson.

Johnson has taken 23 wickets in the opening three Tests after failing to make the squad for the previous Ashes series.

Only Ben Stokes, 22, has managed a century for the tourists in the opening three Test matches.

England, which lost Jonathan Trott to a stress-related illness following the first Test defeat at Brisbane, has failed to reach 400 in a single innings since it faced New Zealand in Wellington in March 2013.

Here, against a rampant Australian bowling attack, it wilted like the England teams of old, which were so often brushed aside.

Needing an unlikely 506 in its second innings to win the contest at Perth's WACA stadium, it fell 150 runs short despite a magnificent 120 from newcomer Stokes.

It means England will now head into the Boxing Day clash at the Melbourne Cricket Ground with only pride to play for.

"The simple fact of the matter is we haven't had enough players in form with either bat or ball," captain Alastair Cook told reporters.

"You can't put it any more honest than that, and people in the dressing room know that.

"It hurts like hell when you come into a contest and you end up being second best."

The two teams will meet in the fourth Test at the MCG on December 26 before moving on to Sydney for the final contest on Friday January 3.

Gareth Evans was just a small boy when a team of West Indies cricketers arrived in apartheid South Africa. The lives of these men would never be the same.
Kallis hits century in final Test
updated 12:54 PM EST, Sun December 29, 2013

Every sport has its gods -- and Sachin Tendulkar has bowed out as one of the greatest in cricket's pantheon.
'Branded as a Rebel': Forgotten men
updated 11:59 AM EST, Fri March 8, 2013

World Sport investigates what happened to the West Indian cricketers who were shunned after playing in apartheid-era South Africa.
World Sport Presents: Branded a Rebel
updated 11:09 AM EST, Wed March 6, 2013

It has been 30 years since a group of young men from the Caribbean made a decision that would define their lives.
The man who took on apartheid
updated 10:12 AM EST, Fri March 8, 2013

It was supposed to be cricket's "Rosa Parks" moment, and it led to South Africa's sporting isolation for two decades.
Sports mercenaries or crusaders?
updated 11:59 AM EST, Fri March 8, 2013

He plays the only sport approved by the Taliban, a game he learned as a war refugee in Pakistan.