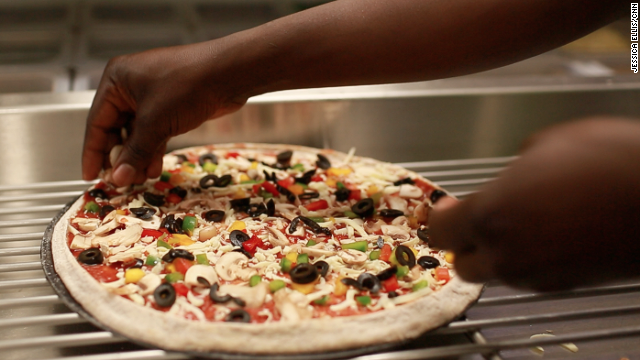 A young entrepreneur has brought to Kenya the concept of Naked Pizza, a franchise that's basing its reputation on the usage of fresh ingredients. 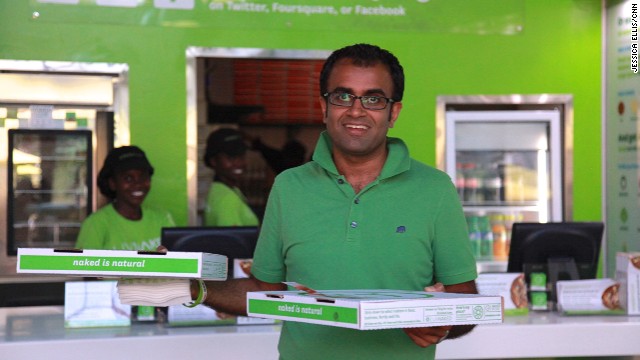 Former banker Ritesh Doshi opened the Nairobi-based Naked Pizza store about a year ago on the promise of fast delivery and natural ingredients. 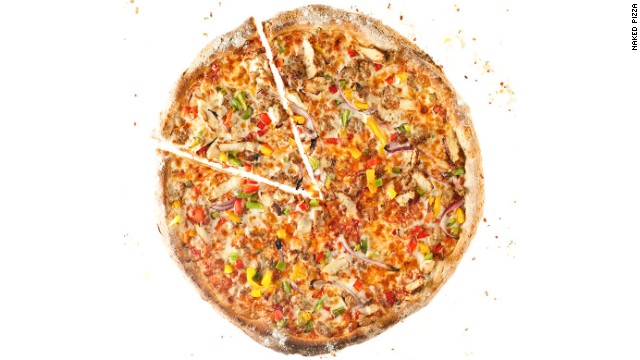 The company's menu offers nine pizzas, including the Ragin' Cajun, made of ingredients such as beef sausage, chicken, garlic, mixed pepper and red onion. 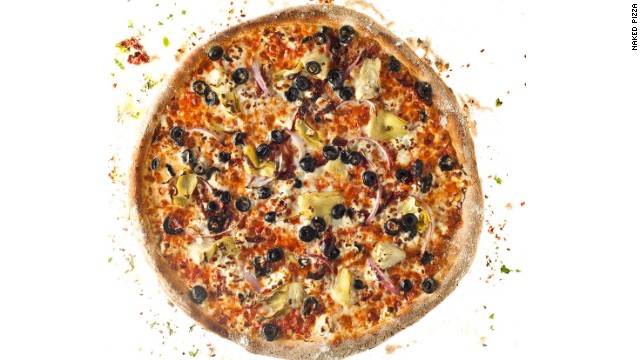 Another option is the Mediterranean, made of artichokes, sun-dried tomatoes, red onions, black olives and feta cheese. 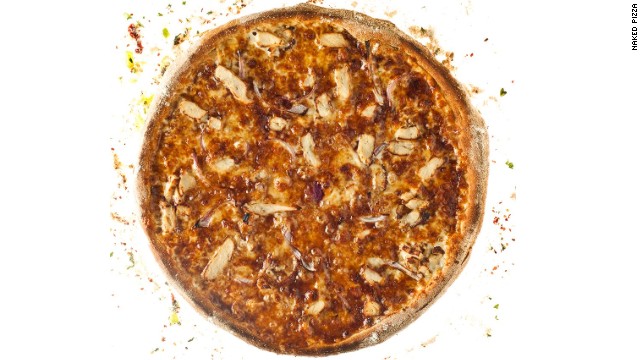 This is the Smokehouse, made of bbq sauce, red onions and chicken. Doshi says his company, which employs 32 people, has received a "fantastic" response and is already seeing growth and profits. 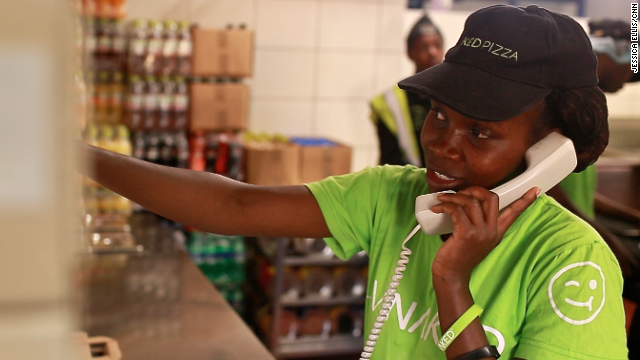 Naked Pizza says it receives between 100 and 150 orders on slow days and up to 400 at busier times. 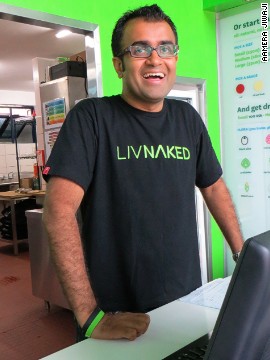 Doshi's idea to bring the pizza franchise to his home country stems from his global travels working as an investment banker. He says in most places you can have a pizza delivered in about half an hour, so why not Kenya? 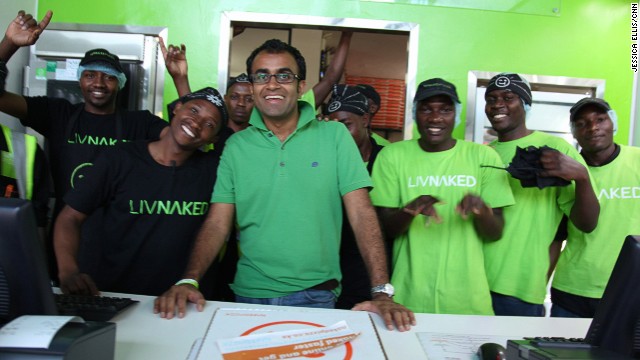 (CNN) -- What would you do if you had to wait 90 minutes for your pizza to be delivered? Stare out the window with sad, hungry eyes? Call in screaming to cancel your order? Take to Twitter to vent your #waitingforever fury? Or take matters into your hands and launch your own pizza delivery store?

Back in 2011, Doshi, an investment banker whose career had taken him to London, New York and Amman, returned to his native country Kenya to visit his parents. One night, he and his family decided to order out. 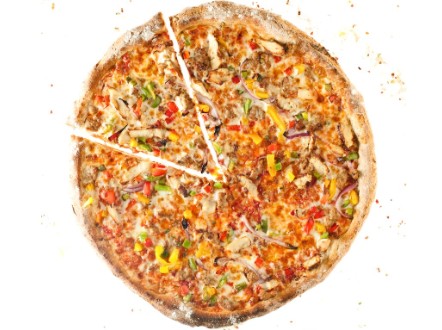 "We had to wait for about 90 minutes for the pizza to be delivered," remembers Doshi. "We then ordered again another night from another place and it took 75 minutes," he adds. "You just couldn't get a decent pizza in a reasonable amount of time. So I thought, you know what, anywhere in the world that I've lived and worked you can get a pizza in 35 minutes -- so why not in Nairobi?"

That was it. Soon after, Doshi left his career in banking and set his sights on the pizza industry. After talking to several people, he decided to bring to Nairobi the concept of Naked Pizza, an international franchise thriving on the usage of fresh ingredients.

"If you look at the dictionary definition of naked, natural is one of the definitions that come up," says Doshi. "We have no weird chemicals added to our food, we don't add sugar to any of our products," he adds. "Our meats are all hormone free -- everything that we use is natural."

Naked Pizza was founded in the U.S. in 2006. Outside America, there are five stores in Dubai. Kenya's first outlet was launched about a year ago and since then sales have been growing every month.

"The response from the customers has been fantastic," says Doshi. "We really saw an opportunity to create a healthier product and get it to people quickly."

Inside the Naked Pizza store in Westlands, an affluent Nairobi neighborhood, a group of green-shirted young men line up behind the counter to cut vegetables, shred cheese and prepare the sauce for the day.

The company's menu includes nine options, but Doshi says the most popular ones are the superbiotic -- a mouthful of artichoke, baby spinach, mixed pepper, mushroom, garlic, red onion and coriander -- and the omnivore, a pizza comprised of beef pepperoni, beef hamburger, turkey ham, mixed pepper, mushroom and black olives.

Read this: Africa's techies board the StartupBus

Yet, tracing some of these ingredients has not always been an easy task.

We really saw an opportunity to create a healthier product and get it to people quickly.
Ritesh Doshi, Naked Pizza

"Things like artichokes and jalapenos were hard to source," says Doshi. He explains that building a supply chain and navigating Kenya's bureaucratic machine have both been very challenging.

"We need licenses for literally everything," he says. "Our signs, our bikes, for any kind of branding we do and a whole host of other things."

Despite the challenges, however, the young entrepreneur is determined to "get Nairobi naked." He is optimistic about the venture's future, saying that he's already developing a second store and is actively looking for more retail estate.

At the heart of this is the brand's appeal to people of all incomes from both the local and expat community in Nairobi.

"The love of pizza is an international thing and we've been able to really transcend economic boundaries, racial boundaries and age boundaries," says Doshi. "There is a great story -- an old lady who had never tried pizza before was visiting her daughter from outside Nairobi; her daughter is a regular customer and this was the first time she tried pizza."

Read this: MyMusic dances to the mobile beat

It's great to be part of the growth story at home.
Ritesh Doshi, Naked Pizza

Doshi says the growing breed of young Kenyan returnees has also been one of the main drivers of Naked Pizza's success.

"There is a large, increasing number of Kenyans coming home," he says. "People who studied and lived all over the world -- a lot of them are coming back and actually a large part of our customers is made up of returning Kenyans."

A repat himself, Doshi says he's not regretted quitting his promising career in investment banking to set up a business in Nairobi, a rising international city and economic market.

Looking ahead, Doshi is aiming to grow the brand while changing people's eating habits in the process.

"We think we can do that by delivering a great product, with great customer service," he says.

As for the waiting time?