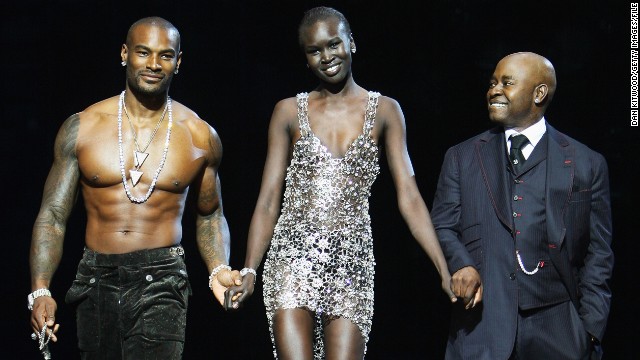 Nigerian jeweler Chris Aire (right) is a master craftsman, famous for his magnificent designs made of diamonds, gold and other precious stones and metals. 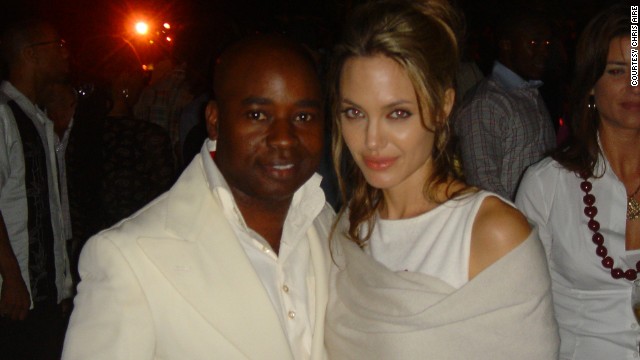 His A-listed clientele ranges from Hollywood superstars, such as Angelina Jolie ... 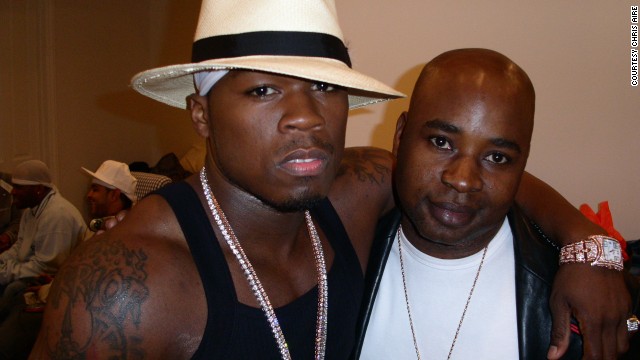 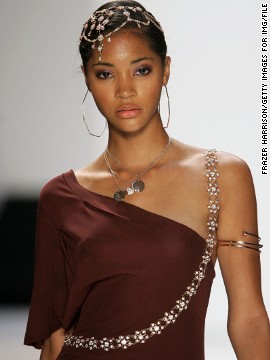 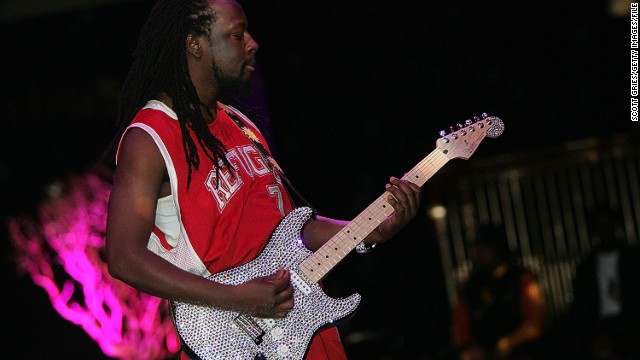 The designer's sparkling creations include a $500,000 diamond-coated guitar for hip-hop artist Wyclef Jean. 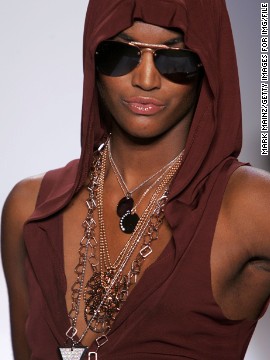 "I try to listen to what people want," says Aire. "Because sometimes what we articulate is sort of different from what we want ... and because this is something I live and breathe, for someone who doesn't live and breathe it I kind of feel like I have an advantage." 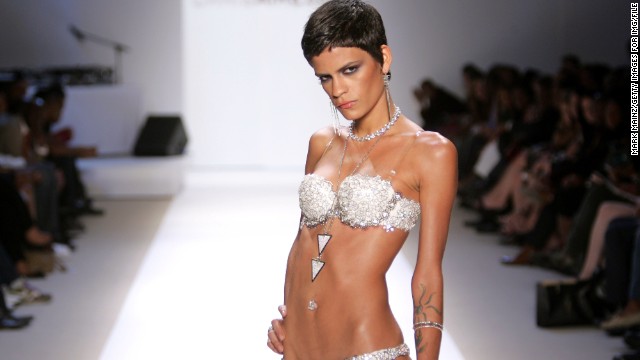 Glittering diamonds, sapphires, rubies and other gems are encrusted on watches, rings, bracelets and anything else Aire comes up with. 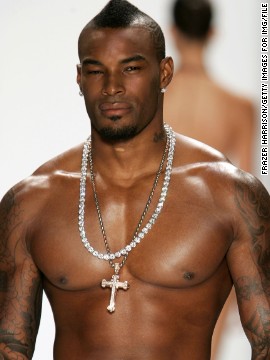 A model walks the runway at the Chris Aire Spring 2007 fashion show in New York. 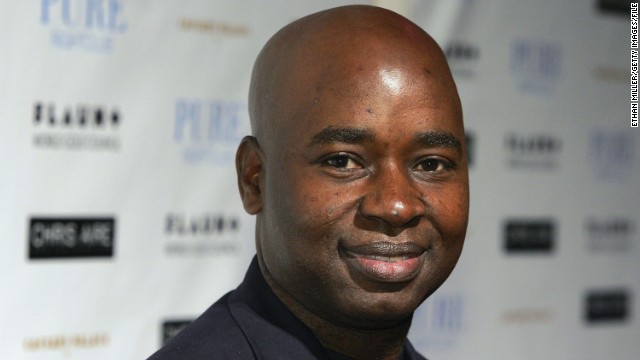 In 2004, Aire became the first jeweler to stage a runway show at New York Fashion Week. 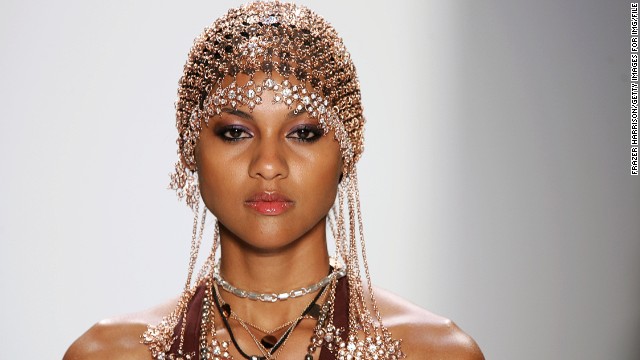 (CNN) -- Chris Aire is known as "the King of Bling," the jeweler to the stars whose dazzling creations are worn by the likes of Angelina Jolie, 50 Cent and Shaquille O'Neal.

But although he might be regularly rubbing shoulders with Hollywood superstars, famous musicians and elite athletes today, there was a time when the Nigerian-born designer could only dream about approaching a celebrity.

More than two decades ago, Aire used to hang outside five star hotels and trendy bars in Los Angeles in the hope of showing his designs to a potential star client.

"I had my little coach bag," remembers Aire. "I had everything in it 'cause seriously I didn't know any of these guys. So walking up to them you really have just a minute -- if even that -- to say 'yo, this is what I've got,'" he adds. "I had instances where people thought I was selling hot items -- 'this dude out here man, he's got some stolen stuff.'"

But after a year of frequenting celeb hotspots, exhausting his savings in the process, Aire's big break finally came following an L.A.-based encounter with Gary Payton, the NBA star playing for the Seattle Supersonics at the time.

"I was just hanging out at a hotel waiting for him because I knew he was going to be there," remembers Aire. "And when he came down, the press rush that he had, he would have been justified in saying, 'hey man get out of my way."

Instead, Payton invited Aire to go later that year to a charity event in Miami and show him his creations. There was only one problem: Aire had no money.

Undeterred, Aire decided to max out his credit card and buy an airline ticket to Miami, even though he couldn't afford a return flight to L.A. But when he got to Florida, Payton was so impressed with his designs that he immediately placed a $50,000 order, buying a platinum basketball pendant for himself and other jewelry for his friends.

"That sale transformed my life," says Aire. "Not only did I pay for the flight ticket, I had enough to start building and doing a bunch of my own collection."

The son of a successful Nigerian businessman, Aire grew up in the West African country's Ivue Uromi region. His father wanted him to go into the family oil business, but instead Aire left Nigeria aged 18 to go to college in the United States.

But while working on getting his education, Aire had also to find a way of supporting himself. His first job was flipping burgers in a fast-food restaurant overnight.

"I would work from 10 pm to 6 am in the morning and then I'll go home, get a couple of hours nap and then go to school at nine," recalls Aire. "I was at school from 9 until about 4 pm -- and then I went home, got ready and repeated that again, five days a week."

After graduating from college, Aire tried his luck briefly as an actor and singer, before making his foray into jewelry with the help of a friend whose father was a jeweler.

Starting from the bottom, Aire worked his way up, learning the craft and understanding everything about gold, diamonds and other colored gem stones.

After six years of apprenticing under his friend's father, Aire had managed to save $5,000. He then decided it was time to strike out on his own and form his own company.

"It was a leap of faith and I took that leap of faith," says Aire. "I was very confident in my faith because I believe whatever it is that puts the inspiration in your mind has within it its own fulfillment."

There is going to be a time when Africa, starting with Nigeria, becomes the envy of luxury market.
Chris Aire, jeweler

Since then, Aire has managed to build a thriving company whose A-list clientele is a roll call of cinema and music superstars. In 2004, Aire made fashion history when he became the first jeweler to stage a runway show at New York Fashion Week.

His sparkling creations include a diamond encrusted cuff -- priced at $1.7 million -- and a $500,000 diamond-coated guitar for hip-hop artist Wyclef Jean.

But even though he mixes with the rich and famous, Aire has not forgotten where he came from. He frequently visits Nigeria and is optimistic about the future of both his country and his continent.

"I think there is going to be a time when Africa, starting with Nigeria, becomes the envy of luxury market," he says. "There's massive wealth here but the Western impression of Africa has always been a country of people in need of charity, in need of aid, but Africa really is the last frontier."

Aire also believes that people in the continent should support local designers and luxury brands, which in turn can speed up the growth of African businesses.

"We have to embrace our own so that the next Louis Vuitton or Chanel comes out of Africa. So we are positioning ourselves to be that breakout brand from Africa."