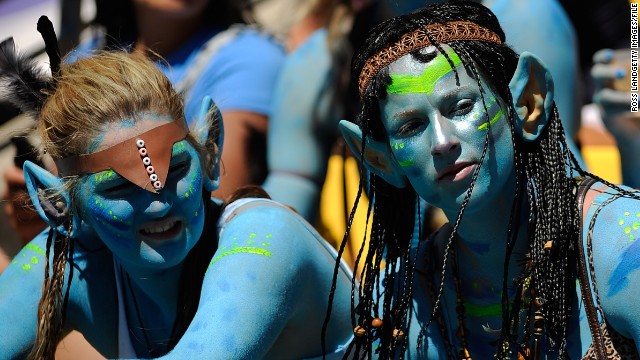 Fans don blue paint and Avatar costumes at the Wellington Rugby Sevens tournament. Dressing up in costume has become a cult activity at sevens events the world over. 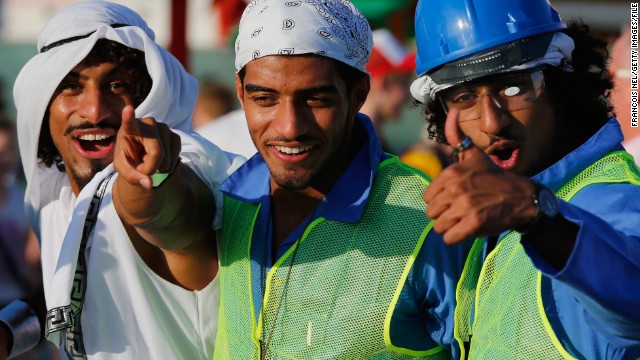 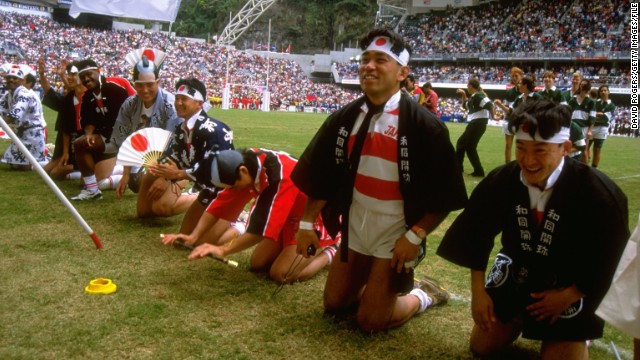 It's not always the fans who enforce the fancy dress code. In this image, Japanese players salute the crowd at the Hong Kong Rugby Sevens in 1990. 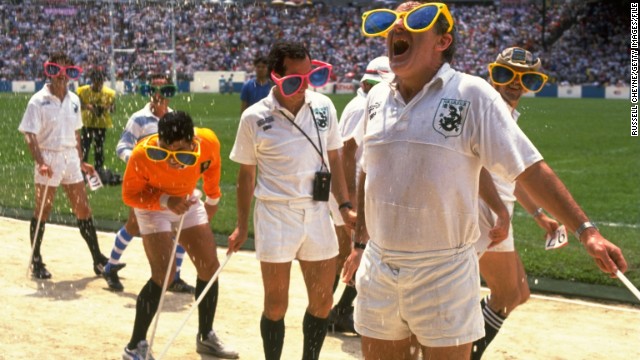 Even the referees have been known to get in on the act, as they did here in Hong Kong in 1989. 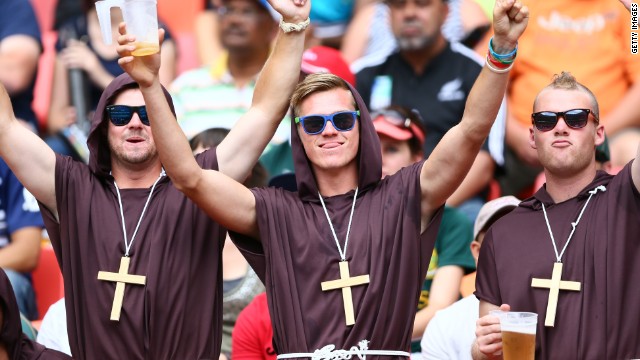 With rugby sevens now officially an Olympic sport, the colorful spectrum of fancy dress costumes will be gracing Rio de Janeiro in 2016. 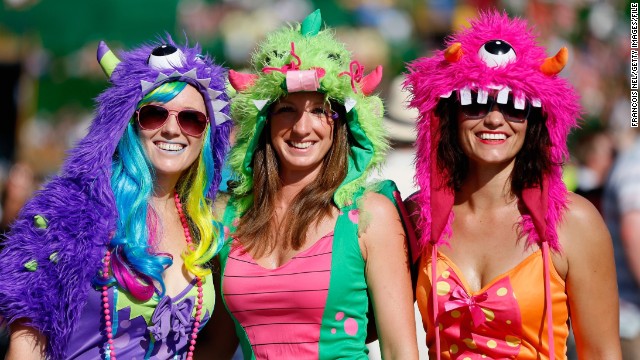 According to former pros like ex-England international, Jason Robinson, sevens can be a fun introduction to rugby. 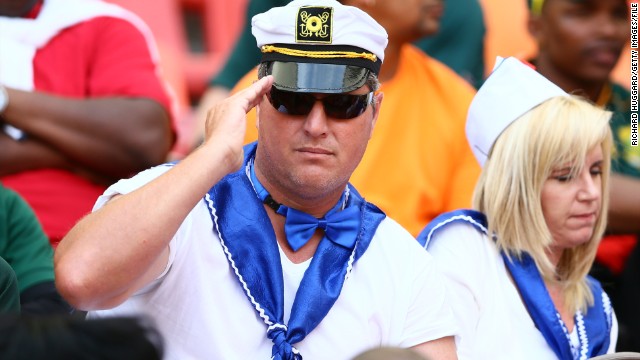 Hello sailor! Spectators' costumes, such as these, just get better and better -- as does the quality of the action on the pitch, says former Rugby World Cup winner Will Greenwood. 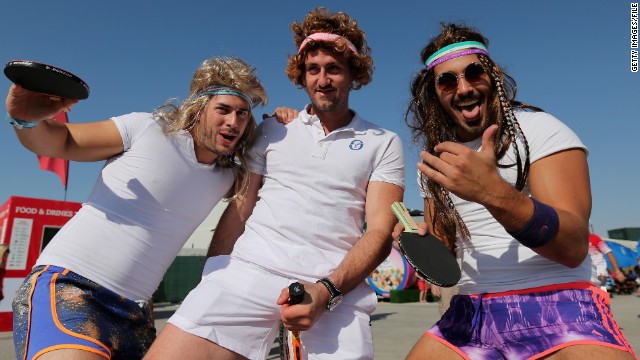 Dubai was the host of the November leg of the World Sevens circuit, with Fiji defeating South Africa in the final. 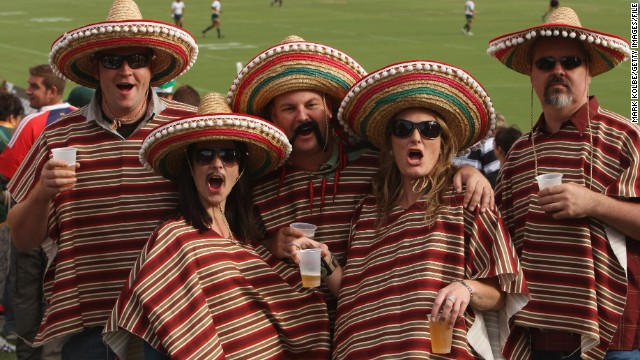 (CNN) -- It's played from the sun-soaked sands of the Pacific Islands to the mud-sodden playing-fields of England's most exclusive private schools.

The game's professional competitions attract a colorful core of hard-drinking supporters with a penchant for fancy dress (think cowboy hats, togas and men dressed as nuns).

And come 2016, this unique combination of sport and frock-wearing spectacle will be gracing Rio de Janeiro's Olympic Games.

Welcome to the wonderful world of rugby sevens, a combination of fast and furious on-field play augmented by no little fun in the stands in a nine-leg circuit which reaches its party peak in Hong Kong.

Although it may lack some of the more brutal hits perpetrated in its 15-a-side cousin rugby union, sevens is quick, intense and just as technically demanding.

The boisterous atmosphere that surrounds the sport, meanwhile, encourages fans of all ages to get involved and participate.

"It's as much about the party as it is about the matches themselves," former Australia rugby union international Joe Roff told CNN's Rugby Sevens Worldwide show.

"Everyone gets into the spirit of it, everyone has a great time but also, it's a community and it's just a great feel.

"I must admit I have been in the South Stand in Hong Kong incognito, in fancy dress. We went toga one year and cowboys one year as well. If you like rugby, these are the things you have to tick off in life."

For old hats like Roff, modern sevens is as close as it gets to the free-spirited days of rugby as an amateur sport. Despite being hugely popular in the likes of the UK, France, Australia, New Zealand and South Africa for more than a century, rugby only went professional in the mid-1990s.

It's as much about the party as it is about the matches themselves
Joe Roff, former Australia rugby international

In the days before the pro era, teams would regularly tour and play against each other before drinking the bar dry together afterwards.

While there may be more of an athletic focus on conditioning, diet and preparation these days, the globetrotting nature of the leading sevens competitions means teams travel together and regularly meet in far-flung regions of the world.

Dubai, Las Vegas, Tokyo and Hong Kong are all destinations on the IRB Sevens World Series, a traveling road show that exhibits the game to crowds in regions far outside of rugby's traditional heartlands.

"It's a little bit of a throwback to rugby when I played," Australian sevens coach Mick O'Connor told CNN.

"You travel and stay in the same hotel as your opposition, you respect them off the field, but the games are quite ferocious on the field. I like that aspect of it."

For England legends Jason Robinson and Will Greenwood -- both Rugby World Cup winners in 2003 -- this competitive edge allied with the unmistakeable camaraderie makes sevens a great introduction for those who may be new to the wider sport.

"The more people come to this, the more people are exposed to rugby, the bigger it gets," explained Robinson. "It's a broken down version of the 15s game, it's very easy for spectators."

Greenwood, meanwhile, lauds the high skill levels and increasing intensity of a game which he believes has become just as tough as other rugby codes.

"It's short, it's sharp, it's intense, it's pact, there's space, there's tries but increasingly so, there's more physicality," he enthused. "Perhaps in the old days people looked down their nose in terms of sevens being a game of touch and pass -- now it's just utterly ferocious."

While in the past, some of rugby's leading young players would use sevens as a finishing school before making the step up to the 15-a-side game, today it's more common for aspiring players to stay in the sevens for longer.

Increased popularity has enabled the IRB to offer more lucrative and longer contracts to the sport's biggest stars. The prospect of Olympic participation, meanwhile, means sevens is now at the forefront of many a rugby player's mind.

"What we're finding now with the Olympics coming up, some of these players that left sevens to go to fifteens want to come back into sevens to try and go for a gold medal in Rio in 2016," International Rugby Board CEO Brett Gosper told CNN.

The history of rugby sevens

"Some of the 15 stars will come back and play (sevens) but it is a specialist sport and they do have their own stars and great players, whether they be from the top sides of New Zealand across the women's games," he added. "I'm sure during the Olympics, some stars will be born."

For Greenwood, however, the magic of seven-a-side rugby is about more than just the prospect of Olympic glory. This is the case for both players and fans, he believes, and is evidenced at events the world over.

"It's just a fantastic way to spend a weekend," he enthused.

"Of course they're passionate about their country winning, but at the end of the game they all get up and have a dance together, go for a hotdog and have a great time.