Snowmen and suffering: A bleak winter for young Syrian refugees 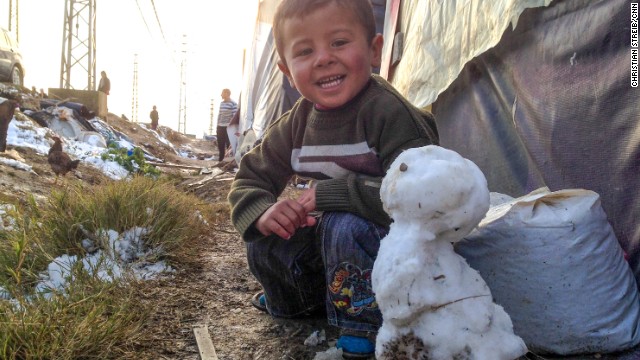 A Syrian boy shows off his snowman at a refugee camp in the Bekaa Valley on December 12. 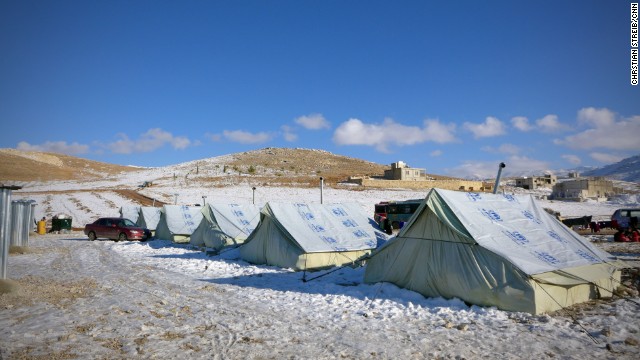 The Shuhada Camp in Bekaa Valley pictured on December 16. The number of Syrians who have fled their war-ravaged country is more than 2 million, according to the United Nations. Lebanon has taken in more than 800,000 refugees. 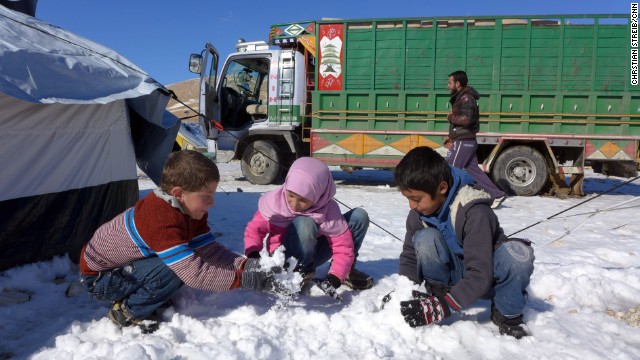 Syrian refugees play in the snow at the Shuhada Camp in Arsal, Lebanon on December 16. Impoverished Syrian refugees throughout the Middle East are facing harsh winter weather. 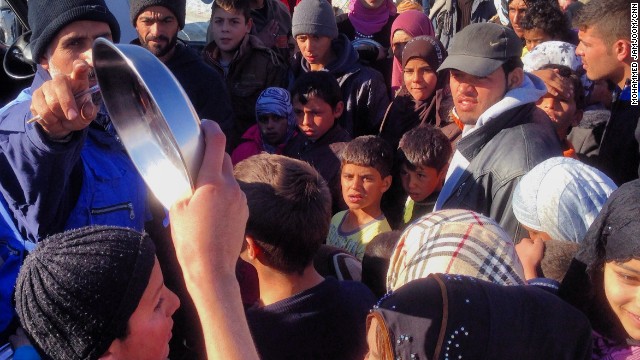 Food distribution to Syrian refugees in Arsal, Lebanon on December 16. 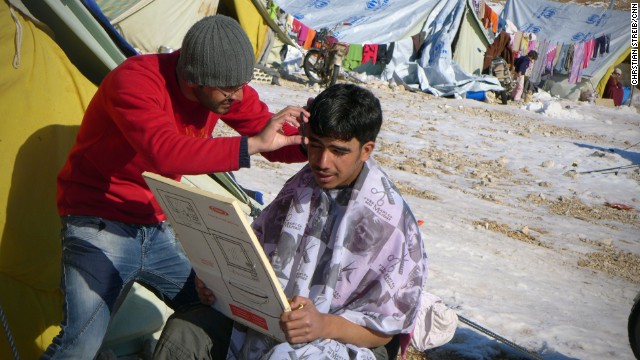 A Syrian refugee gets his hair cut at the Shuhada Camp. 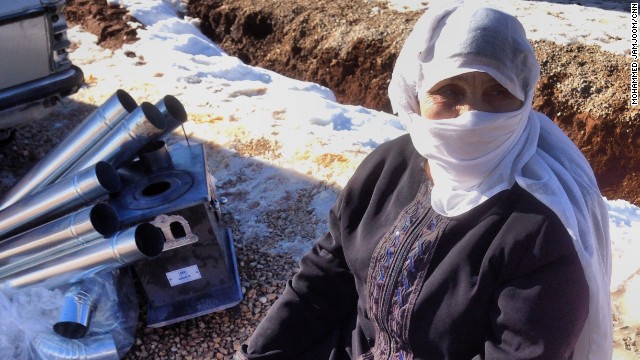 Um Bassam, a 70 year old refugee from Syria, is one of the recipients of a stove for heating that was distributed by the UNHCR in Arsal, Lebanon. 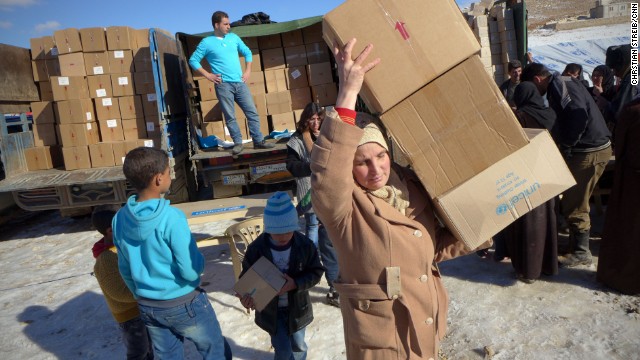 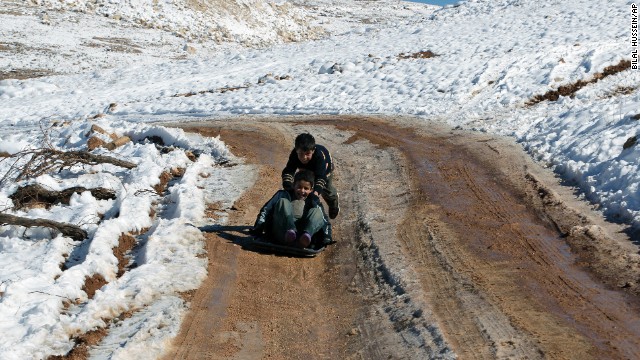 Children play in the snow at a refugee camp in Arsal on December 15. 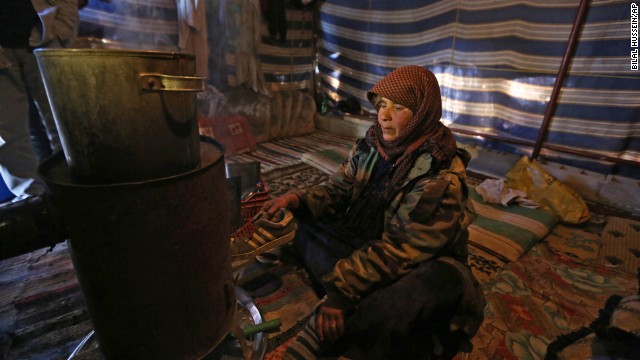 Syrian refugee Mariam al-Hamed burns an old shoe for warmth inside her tent at a refugee camp near Baalbek, Lebanon. 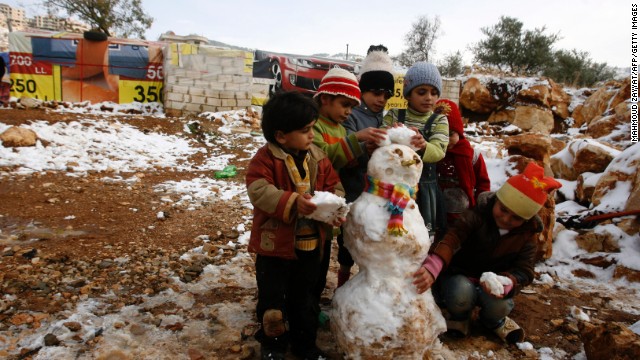 Young refugees build a snowman following a storm in Baaloul on December 12. 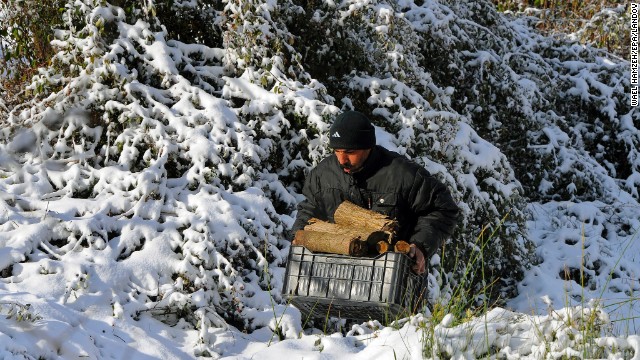 A Syrian refugee carries firewood in the Lebanese village of Hammana. 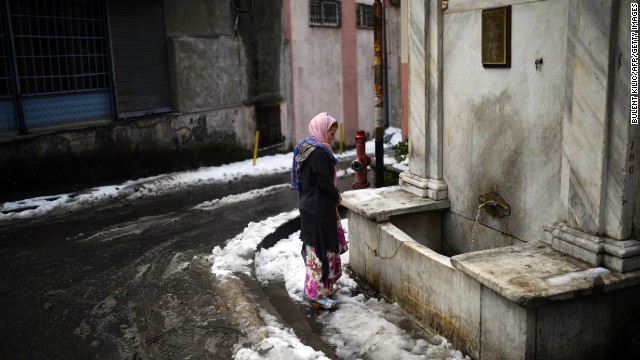 A Syrian woman stands in front of a fountain in Istanbul, Turkey. The recent snowfall brought more misery to refugees in Turkey, who are facing an increasing shortage of supplies. 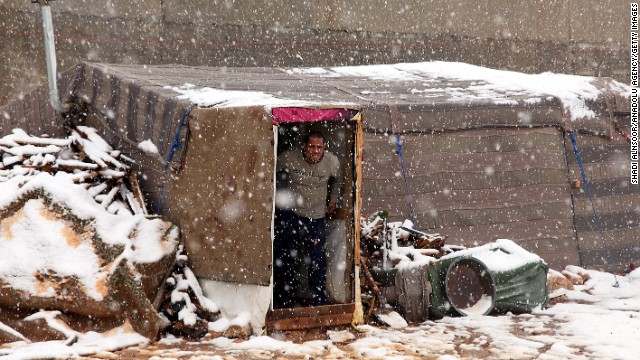 A Syrian refugee looks out of his makeshift tent during a snowstorm in Amman, Jordan. 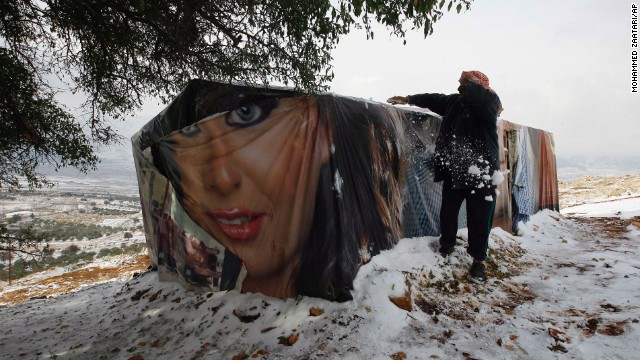 A man removes snow from the roof of his tent at a camp in Lebanon's Bekaa Valley. 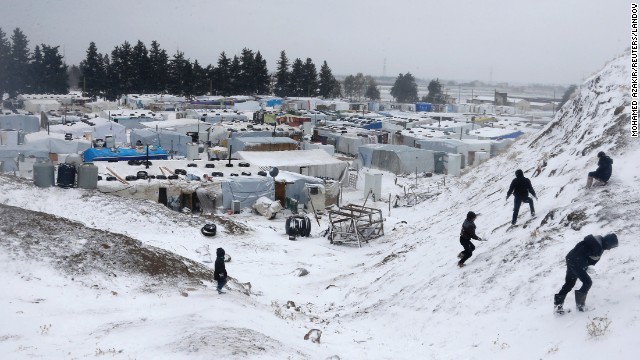 (CNN) -- The little boy sits proudly next to his snowman, and smiles.

He has no coat, gloves or hat to protect him from the freezing cold, but for a moment he is distracted from the harsh reality of life inside a makeshift refugee camp in Lebanon.

We do not know his name, but he is one of 842,000 refugees the U.N. says are spending the winter in Lebanon after fleeing a brutal three-year civil war in Syria.

Do images have power to impact anymore?

They thought that life could not get much harsher. But that was before winter storm "Alexa" moved in, bringing snow, rain and freezing temperatures across the region.

Despite the miserable conditions, for many children in refugee camps, the snow was a novelty.

The snowman photo above was captured by CNN cameraman Christian Streib as he toured the U.N.-run Arsal transit camp in Lebanon's Bekaa Valley, now home to 40,000 refugees.

"I saw the snowman in front of a tent and thought it would make a good picture," he said. "Then the boy appeared, and smiled as I took his photo. Then he looked away, distracted as more people arrived. We were in a rush to finish filming so I never got to talk to him."

"But just look at the smile. So innocent. The snowman symbolizes so much too. Everyone can relate to a snowman. All of us have built a snowman. And this one -- while built out of very little -- puts a smile on the face of a boy with meager means."

Streib said he was amazed by the dignity of the children, even though they were hungry and cold. The majority had their naked feet in plastic slippers, he said.

"Kids are everywhere in the camp, just roaming, with time on their hands, but they'll always find something to play with." 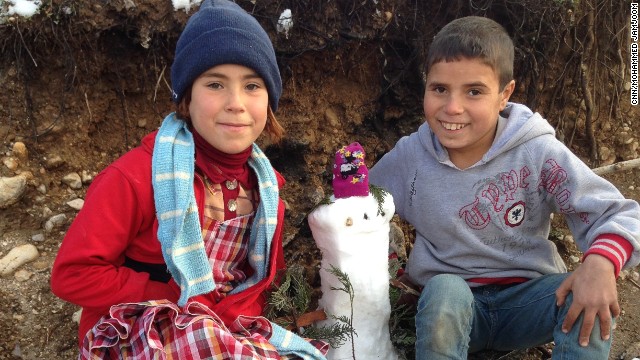 Khadija and her brother Amjad are from Aleppo, which has suffered some of the heaviest bombardments during the bloodbath in Syria.

CNN Correspondent Mohammed Jamjoon recalled how the children were determined to have fun, despite the freezing conditions.

"Clinging to any remnant of childhood abandon they could, they decided to build a snowman," he said. "This photo was taken on the same site where Christian got the picture of the boy and the snowman.

"It's very moving: You want to give, but you feel helpless. You're the outsider with the big camera, but they just want to explain their situation," he recalled. "And every conversation finishes with the same sentence: I want to go home."

That's not going to happen soon. The child refugees in Lebanon are unlikely to see their homeland again before reaching adulthood.

Lebanon has absorbed the highest number of Syria's refugees. The U.N. predicts there will be more than 1.5 million in the country by the end of 2013. Lebanon's population is only 4.2 million. 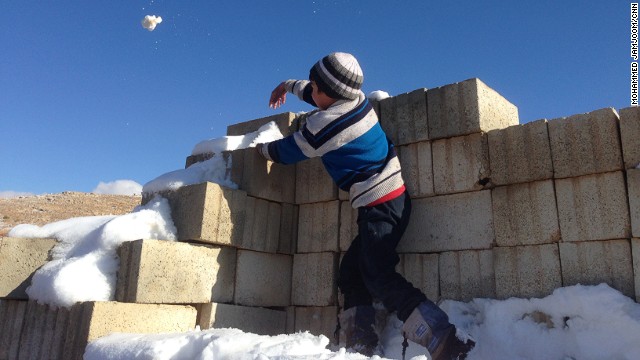 This Syrian boy launched into a snowball fight in Arsal on Monday. Mohammed Jamjoom said: "We watched at least six boys play and enjoy themselves while aid was being distributed."

Syrians would go to any lengths to reach Lebanon, Jamjoom said. That's despite the horrific conditions they found when they arrived.

He recalled the scene as he and cameraman Chris Jackson accompanied medics and aid workers as they immunized children aged five and under on a previous visit to a camp in the Bekaa Valley.

"It's absolutely heart-breaking," he said. "These people are effectively living in an open sewer. They are walking through filth, through human waste." 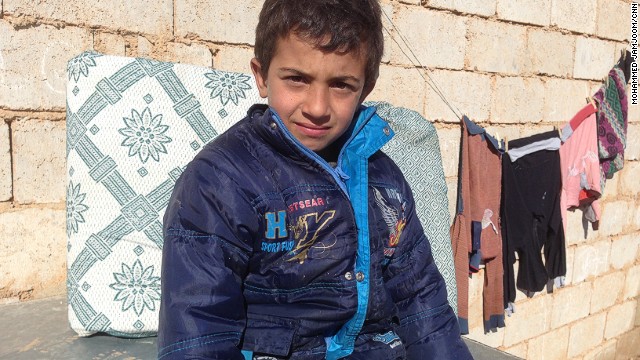 Yaacoub lives in the UNHCR-tented transit site in Arsal. This picture was taken on Monday as the U.N. delivered blankets, clothes, fuel vouchers and stoves to refugees. He told Jamjoom he was extremely happy that aid was being delivered, but they need much more.

The younger children - aged eight and under -- are better able to endure the harsh conditions in the camp, Jamjoom said.

"These are kids walking around sockless with sandals despite the cold -- but they would still come up to me asking me to take a photo. They can cling to any remnant of childhood because they are resilient."

But children two or three years older had more mixed emotions, he said.

"They are still young, but there is anger at the realization of their conditions," said Jamjoon. "Everything around them is forcing them to become adults."

Syria's children: Another year of horror

And for the parents, seeking to provide order amid chaos for their children, life is no easier.

"They are still shocked their children are living in such conditions. When the weather gets bad, the water seeps under the tarpaulins of their tents. They need concrete bases. The moms say: 'If we could only make some money. If only our children could be educated ...'" 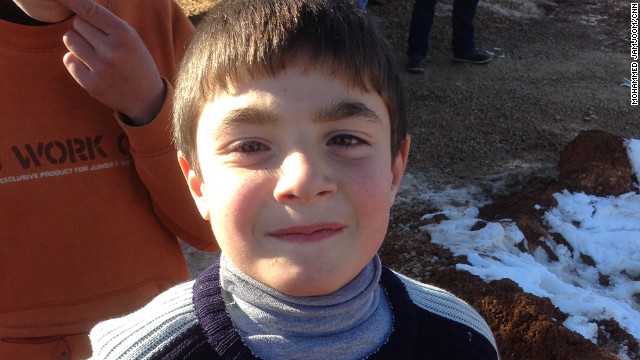 Ghazi is also in Arsal. "He asked me to take his picture and was very curious about what we were filming," said Jamjoom. "He misses home but has friends here. He's cold but thinks it will get better and was glad that his family was happy that winter weather gear was being distributed."

These Syrian children should be at school. Instead they are forced to help their parents in the desperate battle for survival with thousands of others in the camp.

"I met one boy aged 12 who had arrived from Syria in the Bekaa Valley with only one thing, which were his school certificates," Jamjoom said. "He now works gathering eggs or on construction sites."

In urban areas, children help their parents by selling tissues or shining shoes.

"In Beirut I saw 10 kids, all them aged under seven, begging with their mums. The U.N. warns of a lost generation, but I see it happening before my eyes. All of them say: 'We want to go back to Syria, but we can't return because of the war.'

"The U.N. has asked for $6.5 billion just for humanitarian needs, but is finding it hard getting donations even though it's apparent how much suffering there is.

"It's a dire humanitarian crisis -- and it's getting worse by the hour."

Impact your world: How to help

Jihadists have kidnapped over 140 Kurdish boys to "brainwash" them. But a few boys made a daring escape.
Syrian warplanes reportedly strike Iraq
updated 8:48 AM EDT, Thu June 26, 2014

At the start of Syria's civil unrest, Omar would rally against the government alongside his schoolmates, later taking to the streets in his hometown of Salqin.
Could Western Jihadists join ISIS?
updated 5:17 PM EDT, Mon June 23, 2014

Atika Shubert looks at the rise of European jihadists traveling to Syria and whether they soon could join ISIS in Iraq.
Declared chemical weapons gone
updated 10:53 AM EDT, Mon June 23, 2014

The final stockpile of Syria's chemical weapons has been shipped out of the country, according to the OPCW, the Organisation for the Prohibition of Chemical Weapons.
Did U.S. leave vacuum for Iran, Syria?
updated 4:25 PM EDT, Wed June 25, 2014

The US isn't doing airstrikes in Iraq. Is there a vacuum for Syria and Iran to step in? CNN's Fareed Zakaria weighs in.
Syrian rebels take fighting underground
updated 4:04 AM EDT, Tue June 10, 2014

CNN's Nick Paton Walsh returns to the besieged rebel areas of Aleppo, a pale skeleton of a city that has had the life bombed out of it.
How fair can a vote be in a war zone?
updated 7:51 AM EDT, Mon June 2, 2014

Syria may be embroiled in a brutal three-year civil war, but that's not stopping the government from holding presidential elections.
EXCLUSIVE: ISIS uses Twitter to recruit
updated 7:23 AM EDT, Tue June 3, 2014

The three-year war in Syria has claimed 162,402 lives, an opposition group said Monday, as the raging conflict shows no signs of abating.
U.S.: Jihadi grew up in Florida
updated 9:41 PM EDT, Fri May 30, 2014

Official: The U.S. believes a jihadi featured in a suicide bombing video in Syria is Moner Mohammad Abu-Salha who grew up in Florida.
Wife to terrorist wannabe: 'Go die'
updated 10:37 AM EDT, Tue May 20, 2014

For the first time, Britain has convicted someone of a terrorism offense related to the Syrian civil war.