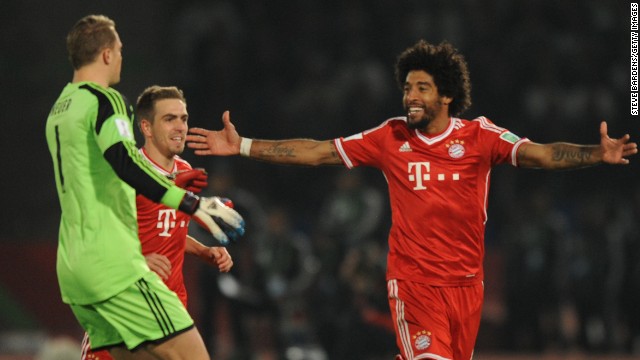 When Bayern defeated outsider Raja Casablanca 2-0 in the final of FIFA's Club World Cup in Marrakech on Saturday, it collected a fifth trophy this year.

Raja Casablanca failed in its bid to become the first African side to win the competition, although the Moroccan champion did well to reach the finale after upsetting South America's Atletico Mineiro.

Bayern was hardly threatened, even without the likes of Arjen Robben, Bastian Schweinsteiger, Mario Mandzukic, Javi Martinez and Mario Gotze in the starting lineup, and scored twice within 25 minutes to end any hopes of a shock upset.

Brazilian defender Dante put Bayern ahead in the seventh minute when he was unmarked in the penalty area and Raja Casablanca keeper Khalid Askri made two good saves before Thiago Alcantara's strike in the 22nd doubled the score.

And only a minor miracle, it seems, can stop Bayern from repeating as German champion after its main rivals stumbled Saturday.

It was Dortmund's fourth defeat in the past six games so the Bundesliga's Christmas break falls at just the right time for Jurgen Klopp's men.

"We can really use this break now, but it is only our fault," Klopp told reporters. "Something that started well has ended badly.

"I can say a lot of things in support of the team but we should have lost none of the games that we lost this season."

Bayern has a seven-point lead over Leverkusen and 12-point cushion over Dortmund, with a game less played.

Third-place in the Club World Cup went to Atletico Mineiro, which beat Guangzhou Evergrande 3-2 thanks to a stoppage time winner from Luan.

Former world player of the year Ronaldinho scored for Brazili's Atletico Mineiro but was sent off in the 87th minute when he retaliated after being fouled.