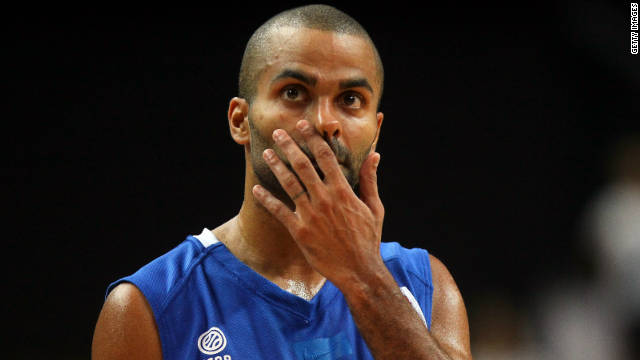 Tony Parker is a hero in his native France and with basketball fans in the United States.
STORY HIGHLIGHTS

Anelka, who plays for English Premier League side West Bromwich Albion, performed the so-called "quenelle" -- pointing his right arm straight down and touching that arm with his left hand -- in celebrating a goal in a match against West Ham Saturday. Some have called the "quenelle" a Nazi salute in reverse.

Anelka is a friend of controversial French comedian Dieudonne M'Bala M'Bala, who popularized the "quenelle" and has been prosecuted for anti-Semitism.

With the English Football Association (FA) investigating the incident, Anelka has promised not to do it again.

"The club fully acknowledges that Nicolas' goal celebration has caused offense in some quarters and has asked Nicolas not to perform the gesture again. Nicolas immediately agreed to adhere to this request," said a statement on the West Bromwich Albion website Monday.

Anelka's compatriot Parker came under the spotlight Sunday when a picture from three years ago surfaced of him doing the "quenelle."

The point guard has released a statement saying he was not aware at the time that it was offensive or harmful.

"While this gesture has been part of French culture for many years, it was not until recently that I learned of the very negative concerns associated with it," he said.

"Since I have been made aware of the seriousness of this gesture, I will certainly never repeat the gesture and sincerely apologize for any misunderstanding or harm relating to my actions.

"Hopefully this incident will serve to educate others that we need to be more aware that things that may seem innocuous can actually have a history of hate and hurt."

Anelka has also denied his gesture was anti-Semitic and stated on Twitter that it was simply a "special dedication" to his friend Dieudonne.

Read: Is France a racist nation?

Two other French EPL players were drawn into the controversy Monday, with Manchester City's Samir Nasri and Mamadou Sakho of Liverpool, photographed performing the gesture.

Nasri took to social media to say his gesture was to symbolize "being against the system."

He tweeted: "It has absolutely nothing to do with being anti semitic or against Jewish people. I apologise for causing any hurt to anyone who might have."

Sakho said he was tricked into performing the signal. He wrote on his Twitter account: "This photo was taken six months ago, I did not know the meaning of this gesture, I got trapped!"