On Monday night, doctors carried out a surgical intervention on Schumacher that allowed for some pressure to be relieved on his brain in a way that was "gradual and effective," said Jean-Francois Payen, head of anesthesiology at the University Hospital Center of Grenoble.

The surgery, which took about two hours, involved the removal of a large hematoma, he said. Schumacher remains in a medically induced coma.

"The situation is better under control than yesterday," Payen told reporters. "We cannot say that he is out of danger, but we've gained a little time in his development. But the hours to come are hours that are crucial in our strategy."

New video of Schumacher being airlifted

Auto-racing legend fights for his life

After consulting with the driver's family, Schumacher's doctors decided to seize the "window of opportunity" and operate, he said.

But Payen warned that it was too soon to speculate on Schumacher's prognosis. "There is still a long way to go," he said. The driver is still in too fragile a state to be moved to another hospital.

Schumacher, the most successful driver in Formula 1 history, suffered severe head trauma after falling while skiing Sunday in Meribel, in the French Alps.

'Catapulted onto his head'

His manager, Sabine Kehm, recounted more details Tuesday of how the accident happened, gleaned from friends and family members who were present at the time.

The party was skiing in an area of deep snow when Schumacher helped a friend who had fallen, she said. As he set off again and went to make a turn, he seems to have hit a rock hidden under the snow.

This catapulted him into the air and he fell head down with all his weight onto another rock, she said, resulting in severe injuries to his head.

Schumacher was not traveling fast at the time, Kehm said, so those with him were initially shocked by how badly he was hurt. "It's not a question of speed but of the angle that you hit the rock," she said.

Kehm also cautioned against reading too much into the doctors' latest report.

"They made it very clear that they are not optimistic, that ... there was a slight improvement compared to the situation yesterday, which doesn't mean we can be optimistic yet," she said. "It's much too early to say."

Kehm declined to comment on the emotional state of Schumacher's family.

But she said "heartwarming" messages of support have come flooding in via e-mails, text messages and letters from people around the world.

In a statement released Tuesday, Schumacher's family expressed thanks for the outpouring.

"They are giving us great support. We all know he is a fighter and will not give up," the statement said.

Kehm said a journalist tried to sneak into Schumacher's hospital room disguised as a priest.

The accident happened while Schumacher was off-piste -- meaning he was on unmarked slopes -- in the mountains between Georges Bauduis Piste and La Biche Piste, resort director Christophe Gernignon-Lecomte said. The driver was wearing a helmet at the time.

He dominated the competition for the best part of a decade, winning five world championships in a row between 2000 and 2004. He retired for the first time at the end of the 2006 championship.

He returned to the Formula 1 track with the revived Mercedes team in 2010 but struggled to repeat his earlier glories. His best finish was third place at last year's European Grand Prix in Valencia, his only podium position in three seasons with the German manufacturer.

He retired from the sport for a second time in 2012.

Schumacher suffered a serious injury once during his career in the high-speed sport, breaking his leg in a crash at the British Grand Prix in 1999. 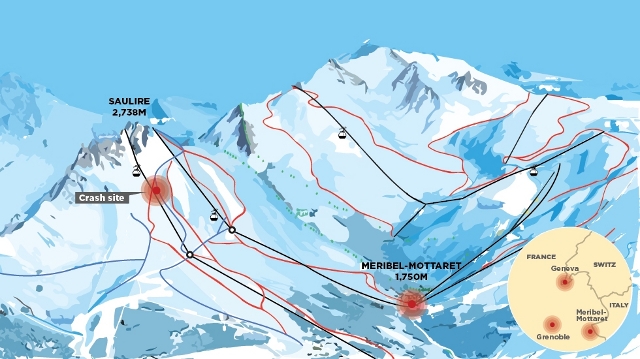