Robert Lewandowski to join Bayern Munich at end of season 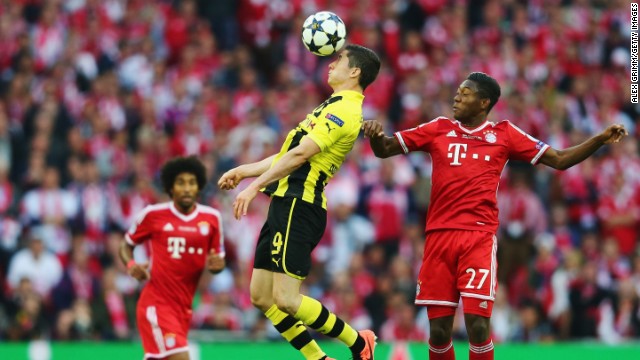 Starting from next season, Robert Lewandowski, middle, will be playing for Bayern Munich not against the German champion.
STORY HIGHLIGHTS

The sought after Polish international signed a five-year contract with Bayern Munich, Bayern said on its website while calling the 25-year-old one of the "world's top strikers." He'll join the Bavarian outfit at the end of the season, when his current deal with Dortmund was due to expire.

"We are very happy that this transfer has gone through," Bayern CEO Karl-Heinz Rummenigge said. "Robert Lewandowski is one of the world's top strikers.

"He will not only strength our squad, but his arrival will also give the entire club a boost."

Some would say Bayern hardly needs it, since it won five trophies in 2013 and is on pace to cruise to yet another Bundesliga crown.

Lewandowski co leads the Bundesliga in scoring this campaign with 11 goals and has netted 91 times in 165 games for Borussia Dortmund since joining from Poland's Lech Poznan for a bargain basement $7 million in 2010.

Gotze's move to Bayern Munich was announced last April while he still played for Borussia Dortmund and the German international became a highly unpopular figure among many Dortmund fans -- so Lewandowski might expect some jeers himself.

Lewandowski's impending departure is a further blow to Dortmund.

The German champion in 2011 and 2012 -- Lewandowski played a key role -- Jurgen Klopp's side has slipped to a distant fourth in the league and narrowly advanced to the second round of this season's Champions League.