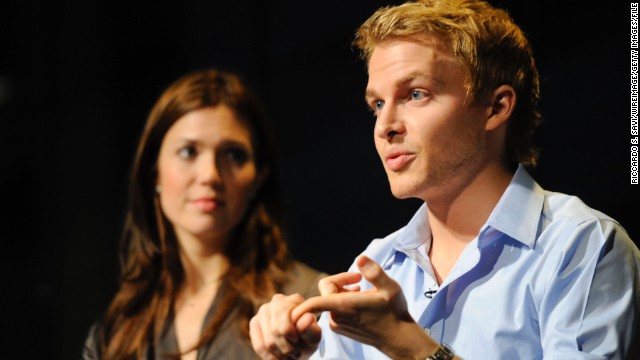 You know that tribute to Woody Allen's lifetime achievement at the Golden Globes on Sunday night? Well, it left out one tiny detail, says his son.

Missed the Woody Allen tribute - did they put the part where a woman publicly confirmed he molested her at age 7 before or after Annie Hall?

"Missed the Woody Allen tribute," Ronan Farrow tweeted, "did they put the part where a woman publicly confirmed he molested her at age 7 before or after Annie Hall?"

That's a reference to Allen's adopted daughter, Dylan, who accused the director of molesting her 20 years ago.

So, why would Allen's own son allude to the allegation?

It's part of the messy, convoluted story that is Woody Allen's personal life.

Farrow is the child Allen fathered with actress Mia Farrow. (Or is he? More on that later)

Mia Farrow also adopted several other children -- Dylan among them.

After a 12-year relationship, the couple split after Mia Farrow learned that Allen was having an affair with Soon-Yi, a daughter Mia Farrow adopted before she began dating Allen. (Soon-Yi is now Allen's wife).

"I'm scared of him, his image," Dylan -- who goes by another name now -- told Vanity Fair in October. "I have never been asked to testify. If I could talk to the seven-year-old Dylan, I would tell her to be brave, to testify."

Which brings us back to Sunday night where Allen, 78, was honored with the Cecil B. DeMille Award.

Right before the segment aired, Mia Farrow tweeted she'd be switching the channel:

Time to grab some icecream & switch over to #GIRLS

"Time to grab some icecream & switch over to #GIRLS"

But Ronan Farrow went for the jugular with his tweet. And his mom retweeted it -- as did many, many others.

5 things we learned from the 2014 Golden Globes

The reaction was swift and mixed.

Many took Farrow's side, including correspondent Luke Russert (son of legendary journalist Tim) who tweeted a link to the Vanity Fair article.

Others said Allen's personal life shouldn't take away from his filmmaking achievements.

Sorry to hear @RonanFarrow's rage, and @thelist which fuels it, but Woody is one of the greatest film directors and deserved the tribute.

"Sorry to hear @RonanFarrow's rage, and @thelist which fuels it, but Woody is one of the greatest film directors and deserved the tribute," tweeted Antonio Vantaggiato.

Now, on to that bit about Ronan Farrow maybe, possibly not being Allen's son.

In the Vanity Fair interview, his mom calls Frank Sinatra the great love of her life and said the two "never really split up."

Asked if her son was Sinatra's, Mia Farrow answered, "Possibly."

When a parent really isn't yours