Pockets of violence amid Thai anti-government protests in Bangkok

Tens of thousands of protesters have disrupted traffic at major intersections and marched on government offices in Thailand's large and hectic capital city this week.

The protests, dubbed "Bangkok shutdown," had begun Monday without serious incident. But on Tuesday night, two people were shot and wounded, an explosive device was thrown at an opposition leader's house, buses were set alight and police officers were attacked, according to authorities.

The protesters say they want Thailand's political system overhauled instead of new elections scheduled for next month. They're demanding that Prime Minister Yingluck Shinawatra's government be replaced with an unelected "people's council." 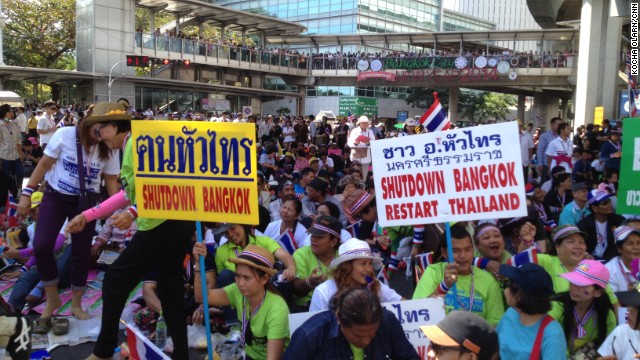 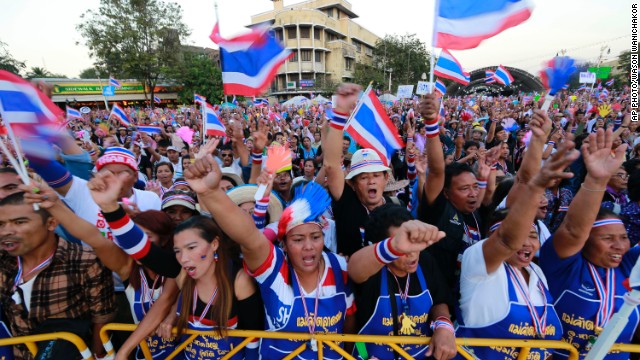 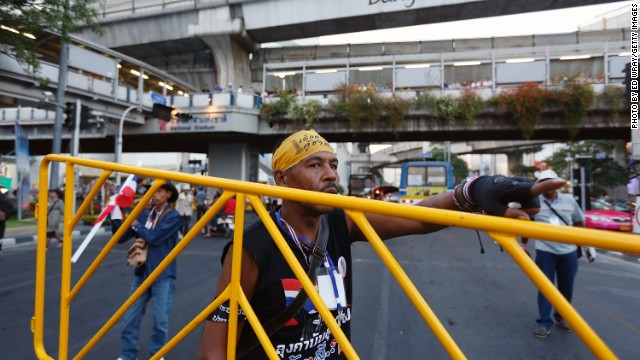 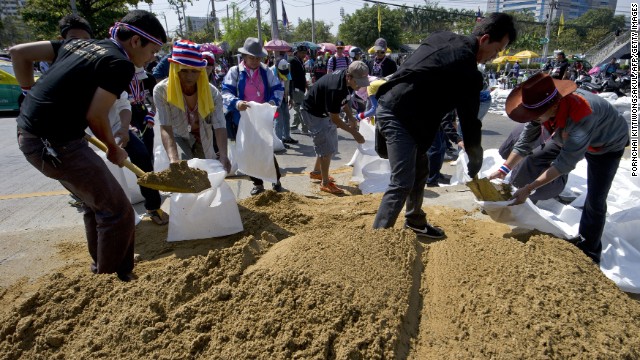 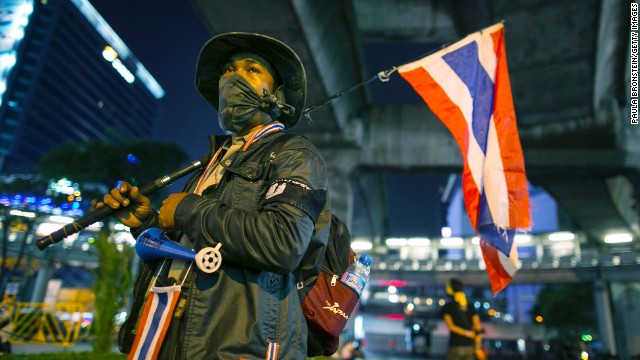 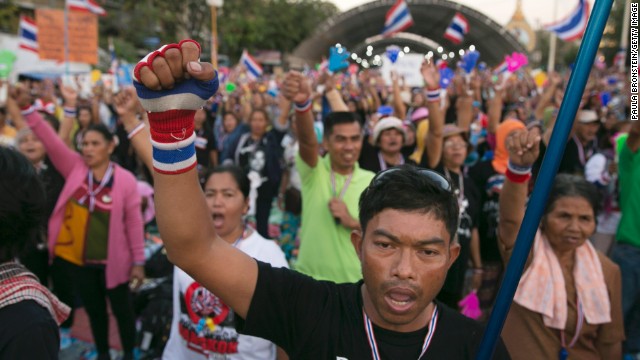 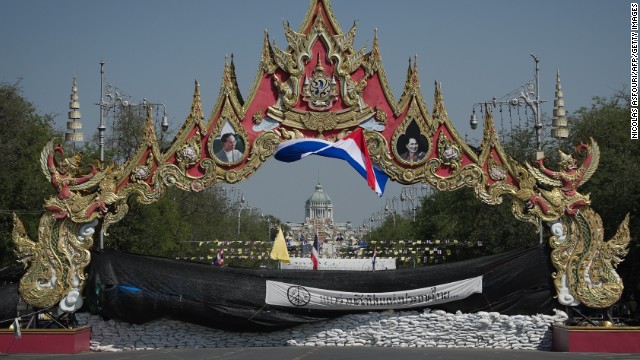 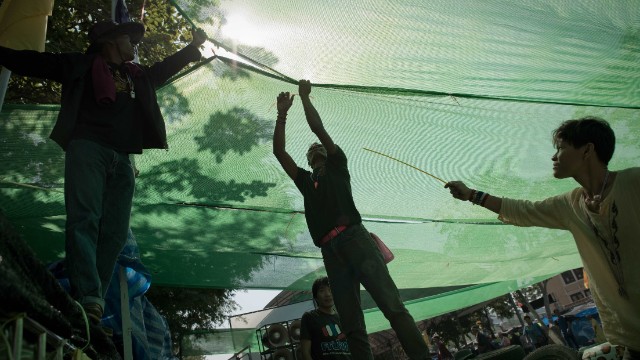 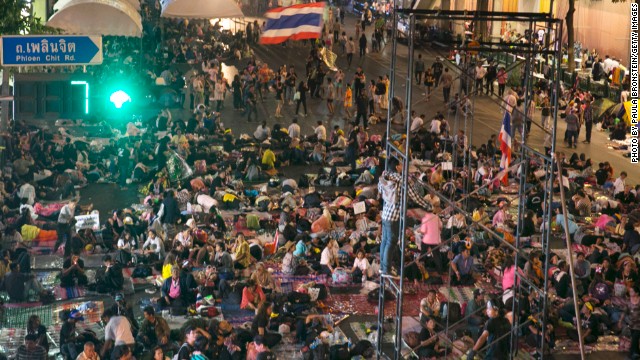 Their numbers dropped from a peak of as many as 170,000 on Monday evening to about 60,000 on Tuesday evening, said Lt. Gen. Paradon Pattanathabut, Thailand's security chief. He said roughly 10,000 demonstrators had stayed out on the streets overnight as others returned to their homes in the Bangkok area.

Protest leaders disagree with the government's estimates of their numbers. They say they had more than one million people on the streets on Tuesday night.

Since Monday, groups of demonstrators have occupied seven main intersections in Bangkok and marched on several government buildings, including the labor, commerce and foreign ministries.

The protests have caused some disruption in central Bangkok, but large areas of the sprawling capital city so far remain unaffected. Authorities have deployed about 20,000 security personnel to keep watch throughout the city.

The government has offered talks with protesters and other concerned parties to discuss a way out of the impasse and the possibility of postponing the election. But Suthep's group has rejected the offer.

With Thailand still scarred by deadly civil unrest in 2010, police and demonstrators have both pledged not to resort to violence. But amid the tense atmosphere in parts of Bangkok, pockets of unrest sparked on Tuesday night.

An explosive device was thrown at the house of opposition leader Abhisit Vejjajiva, Paradon said. Abhisit, the leader of the Democrat Party, was not in the house at the time and nobody was wounded by the blast, Paradon said.

The case is under investigation and it is not certain at this point whether the attack was politically motivated, he said.

Abhisit, a former prime minister, has denied being a member of the PDRC but has appeared on stage and among the crowds at some of their demonstrations.

At Pathumwan, one of the major occupied intersections, two protesters were shot and wounded by unidentified attackers, Paradon said. One of the protesters suffered serious, but not life-threatening, injuries, he said. The other had minor injuries.

In the Lumpini Park area, protesters' guards attacked four police officers who were gathering intelligence, police said. One of the officers remains in the hospital after the assault.

At Nang Lerk intersection, where scores of people have been protesting for months, two buses were set on fire, Paradon said.

Rights groups, the United Nations and the United States have called on Thai authorities and anti-government protesters to respect human rights and avoid violence during the mass demonstrations.

Since demonstrations against Yingluck's government began in November, eight people have died and 470 have been wounded, authorities said.

In a bid to cool tensions, Yingluck dissolved the nation's parliament last month and called for new elections to be held on February 2.

The national Election Commission has urged the government to postpone elections amid the continuing unrest. Yingluck offered to meet with protest leaders and election commission officials Wednesday to discuss whether to delay the vote, her office said.

But Akanat Prompan, a PDRC spokesman, said Yingluck's offer of talks wasn't an answer to the problems.

The protesters want to see changes to Thailand's political system enacted before elections take place, he said, and the demonstrations will continue until they achieve that goal.

The protest group has said that it will allow ambulances to pass along the roads it blocks, and that it will not block access to airports and public transportation.

"We also continue to urge all sides to refrain from violence, exercise restraint and respect the rule of law," she said at a regular news briefing. "And we do, I would note, applaud the restraint shown thus far by government authorities in this regard."

His supporters, known as "red shirts," support the holding of elections on February 2.