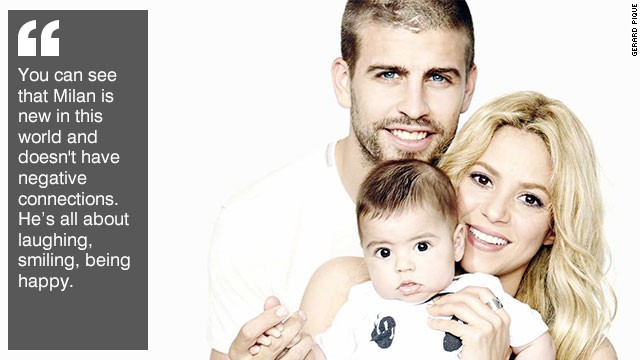 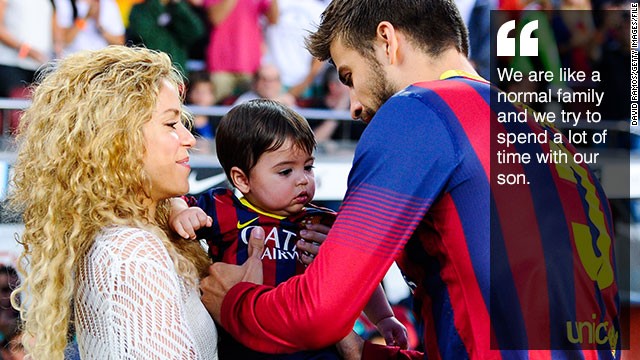 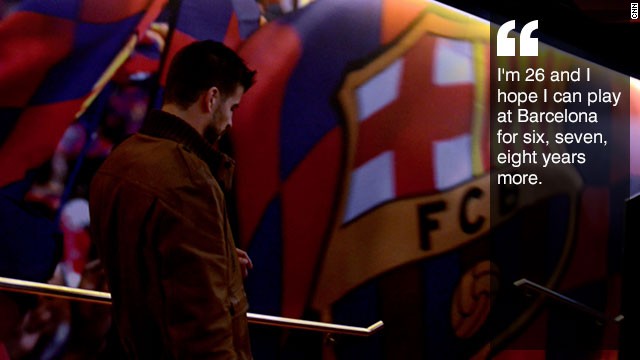 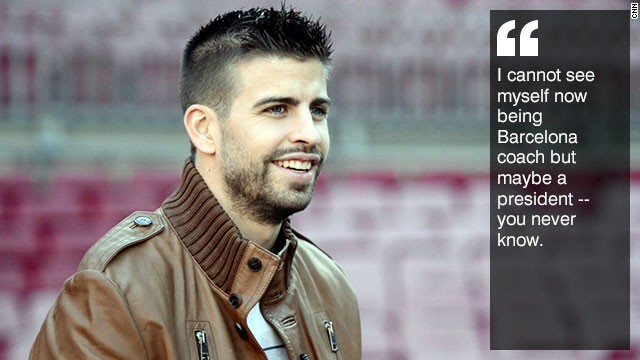 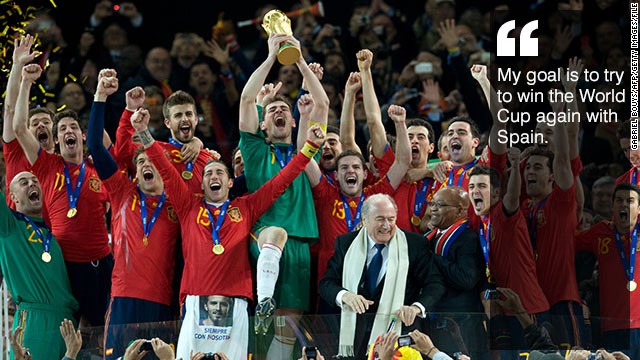 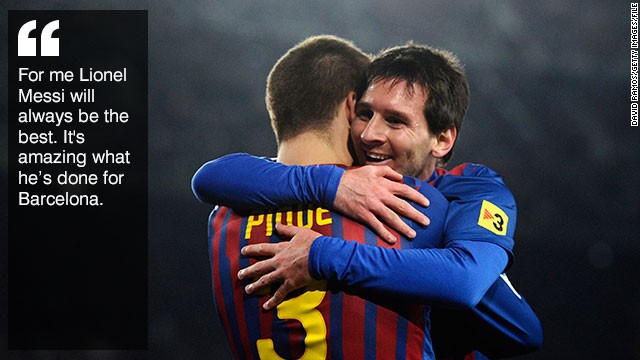 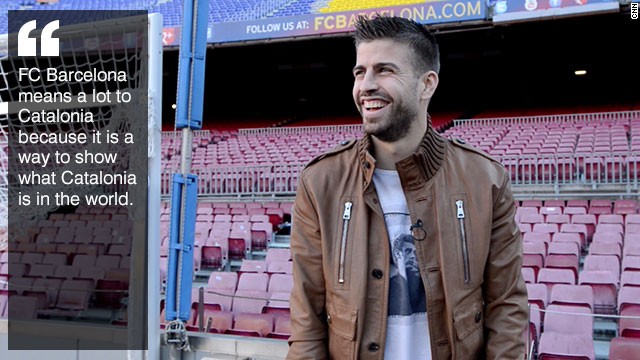 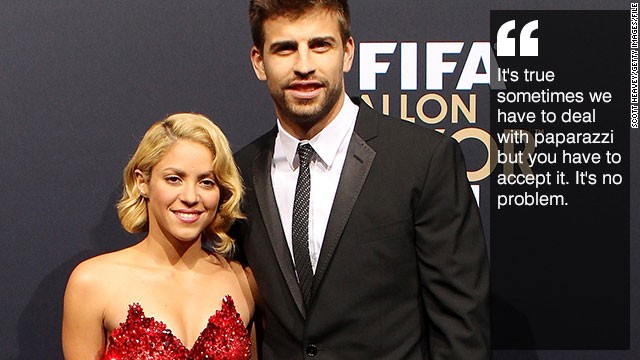 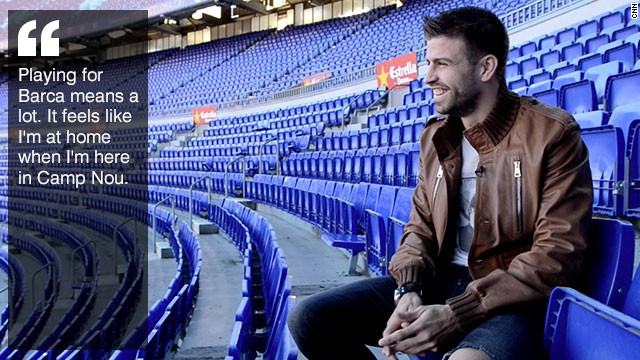 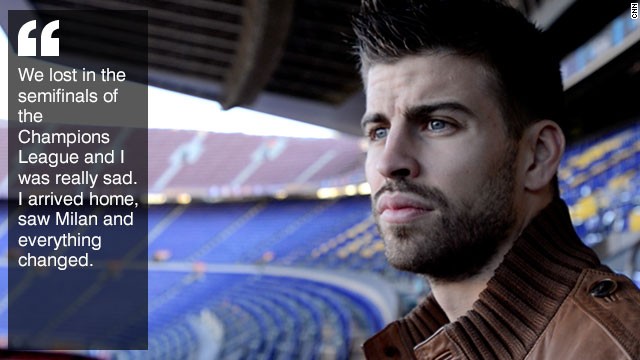 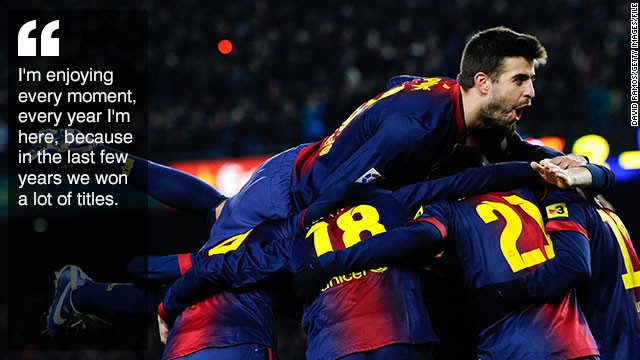 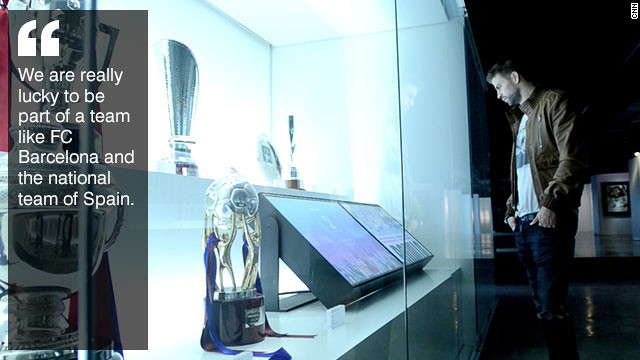 (CNN) -- As power couples go, they have the sparkle to supersede even Posh and Becks.

He's a decorated soccer star with a World Cup title to his name; she has sold over 70 million albums worldwide.

No wonder then, that Gerard Pique and partner Shakira were included in Forbes' 2013 list of the world's most powerful pairings, with David and Victoria Beckham nowhere to be seen.

"Maybe it seems like it's really difficult to manage everything but we are trying to do it as naturally as we can," Pique told CNN's Human to Hero series.

Read this story in Spanish

"It's true that maybe sometimes we have to deal with some paparazzi but then I think we are now four years together -- you have to accept it and deal with it and it's no problem."

As a stalwart in defense for Spanish giants Barcelona, Pique can count three European Champions League crowns among his total of 19 domestic trophies, as well as the 2010 World Cup and 2012 European Championship with Spain.

Shakira had a No. 1 hit single in 55 countries with "Hips Don't Lie," is a judge on U.S. talent show "The Voice" and garnered 595 million YouTube views (and counting) for her 2010 World Cup song "Waka Waka."

It was during shooting for the video that the two met; four years later they now have a son, Milan, and count as one of the most internationally recognized couples on the planet.

So how do they try to maintain a normal life in the midst of all the attention?

"We don't do very different things than the others," Pique explains.

"We are like a normal family and we try to spend a lot of time with our son and before that, just to be a good couple -- going to the cinema, going to have dinner. "

Pique is no stranger to scrutiny, though.

Playing for one of the world's biggest football clubs means every pass, tackle or movement is magnified and examined in minute detail by a menagerie of pundits and supporters.

That intensity of spotlight can easily manifest itself into pressure, and also fear of failure -- even though that word is barely part of Barcelona's recent lexicon.

But if ever the 26-year-old required a reminder that losing is not the end of the world, he only needs to look into his young son's eyes.

"It changed everything," Pique says of Milan's arrival in January last year.

"You can see that he is new in this world and he doesn't have negative connections -- he's all about laughing, smiling, being happy. It's so funny; I enjoy a lot playing with him.

"We lost 3-0 against Bayern Munich in the semifinals of the Champions League last season and I was really worried and really sad because it was a bad game and then I arrived home, saw Milan and everything changed.

"It's great because he's just 12 months now and it's unbelievable, he is starting to walk and we are enjoying this time a lot."

Pique insists there will be no obligation for his son to support Barca -- even though he was enrolled as a member upon birth -- but it seems inconceivable the inextricable link between the club and his family will ever be lost.

Four generations of the Pique clan have been Barca members and Gerard's grandfather, Amador Bernabeu, served as a club director for 23 years.

Pique was infused with a love for the team at an early age, recently telling the club's magazine he sings Barca's anthem every night before he goes to bed, explaining that it is "the only song I know all the way through."

So what exactly does Barca represent for him? "It means a lot," he replies. "It feels like I'm at home when I'm here in Camp Nou (Barcelona's stadium).

"For me since I was five or six, I came here with my family to watch every game every weekend and it means a lot to me now to be a first-team player because it was my dream since I was a kid.

"I'm enjoying every moment, every year I'm here, and it's good because in the last few years we won a lot of titles and I think we are having a really good moment."

'More than a club'

Barcelona certainly lives up to its "more than a club" motto which is rooted in its pride of the Catalonia region it inhabits.

The club's axiom allies the promotion of the area's language and culture alongside good causes (the players still bear the name of worldwide charity UNICEF on their shirts).

Their fans even staged a pro-independence protest in October 2012 during one of the biggest games in world football -- "El Clasico" against Real Madrid -- by singing the Catalan national anthem mid-match.

Credited with an estimated 270 million fans worldwide, Barca is a global advert for Catalonia.

"I think for Catalonia, FC Barcelona means a lot because it is one of the top clubs in the world and that means that it's a way to show what Catalonia is in the world," Pique says.

"Because sometimes, we are really small and Barcelona is an instrument to show to the world that we are good at a lot of things. One thing is to play football really, really well so for the Catalonian people, the team is really important.

"Not only the soccer team because we have basketball, handball and a lot of sports. I think the Catalonian people really identify with Barcelona -- the fans are really proud of the team and the club."

The magic of Messi

If Barcelona is a symbol of pride for Catalonia, then so is its prized possession -- Lionel Messi.

The Argentina striker was crowned FIFA World Player of the Year four times in a row -- that run was ended by Real's Cristiano Ronaldo this week -- and is feted as one of the greatest footballers the game has ever produced.

He moved to Spain to join the famed La Masia academy aged 11, alongside Pique, and has spearheaded Barca's assault on all the glittering prizes club football has to offer.

The team has claimed 16 trophies since the start of the 2008 season, when Pique returned after a four-year spell at Manchester United in England, and Messi's mountain of goals during that time have played an instrumental part in their success.

And Pique says it is a privilege to play with the 26-year-old, who netted an incredible 91 times in 2012.

Read: 'A marathon a day made me stronger'

"I was at the Golden Boot (awards) when he won and it was just amazing what he did," he says.

"It doesn't matter now if he's injured and there's some people that are saying maybe now he's not the best, but for me he always will be the best.

"He made all these fans in Barcelona enjoy a lot, playing such a great football and he made us win a lot -- the Champions League, the league.

"We understand each other just with a look one to the other. People like Lionel Messi or Cesc Fabregas, it's been like half of my life playing with them since we were 12 or 13 so we know each other a lot.

"When we are on the pitch, we know what he will do, what Leo will do because we've known each other for a long, long time."

For a spell early in Pique's career though, it looked like his Barcelona dream wouldn't be realized.

He moved to join Manchester United in 2004, spending four years under the tutelage of Alex Ferguson, one of the most decorated managers in the history of the game.

Pique credits his time in England as a steep learning curve, adapting to new methods on the field, and a new language and culture off it.

"I went there as a kid and I think I came back here in Barcelona as a man," he says of the time he spent under Ferguson, whose 26 years at United were littered with trophies.

With Barca top of the Spanish league and having made it to the quarterfinals of the Champions League, another silverware-laden club season awaits.

But looming large on the horizon is the World Cup in Brazil, where Spain can become only the third team in history to defend the title.

"My goal is to try to win it again," Pique says.

"I think our careers are not very long. You can play 12 or 15, maybe 20 years if you are a good professional and you are lucky with the injuries -- you have to try to win anything you can.

"There are some really good players that didn't win anything in their careers, and we are really lucky to be part of a team like Barcelona and a team like the national team of Spain."

Even if Pique's career was to conclude tomorrow, he could still look back on a litany of fond memories and several years of almost unparalleled success.

And it is almost certainly his deep bond with Barcelona will persist long after he hands up his boots.

"Now I'm 26 and I hope I can play here for I don't know six, seven, eight years more but you never know what will happen in the future.

"Maybe as a coach; I cannot see myself now being a coach but maybe as a president, you never know."