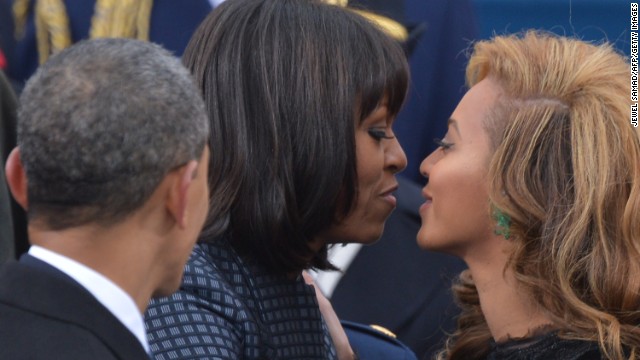 (CNN) -- In this case, BFF could stand for "Bigtime Famous Friends."

The first lady turns 50 on Friday, and it's being reported that she will be serenaded by singer Beyonce for the occasion. The White House is not commenting on whether the singer will be in attendance for Michelle Obama's birthday party, but it's well known that the pair are friends.

The superstar performed the Etta James classic "At Last" at President Obama's first inaugural ball and teamed up with Michelle Obama for her initiative to get children more active. Who can forget FLOTUS dancing to Beyonce's "Move Your Body" exercise theme? Even their spouses are friends. Rapper Jay Z changed the lyrics to his rap song to say "I've got 99 problems but Mitt ain't one" during an Obama fundraiser.

In July, the first lady and daughters Malia and Sasha attended a Beyonce concert in Chicago. The singer even once wrote an open letter of admiration: "Michelle, thank you so much for every single thing that you do for us. I am proud to have my daughter grow up in a world where she has people like you to look up to."

Michelle Obama responded, "@Beyonce Thank you for the beautiful letter and for being a role model who kids everywhere can look up to. --mo"

@Beyonce Thank you for the beautiful letter and for being a role model who kids everywhere can look up to. --mo

Their friendship has not been without controversy, however.

Some Christian mothers were reportedly upset over FLOTUS teaming up with Beyonce because of the singer's "booty shaking" and revealing outfits. Writing for the Daily Beast, journalist Allison Samuels noted that there was "the unfortunate conundrum posed for Mrs. Obama."

"When Beyoncé goes into the studio to record an album for her millions of fans, she's not thinking about her friendship with the first lady; she's thinking about what's hot, what's edgy, and what will sell to the masses," Samuels wrote. "That surely must have been her mindset when she recorded the controversial lyrics single "bow down b**ches" for her new album earlier this year."

Demetria L. Lucas from the Root wrote, "This love fest has gone too far for my liking. I'm no one (and neither are you) to police the first lady's musical tastes, but this continued public endorsement of Houston's Finest rubs me the wrong way. I am not a Bey hater, but I am an observant onlooker."