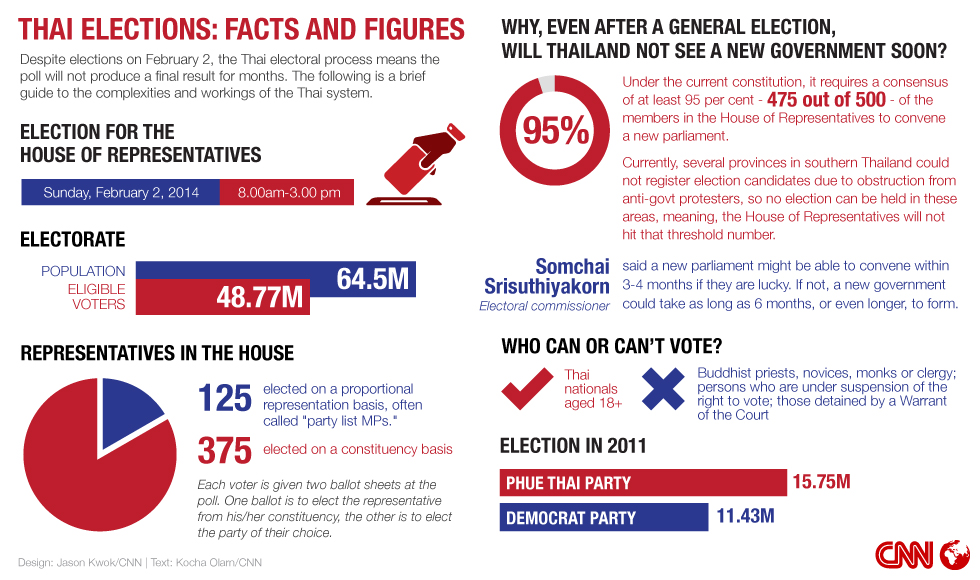 (CNN) -- A state of emergency, streets paralyzed with protesters, the fatal shooting of a leading pro-government activist and an election campaign teetering on chaos may not sound like the script from a rising Southeast Asian economic powerhouse.

But for Thailand -- which manages to combine economic success and political mayhem in equal measure -- this weekend's elections are just another page in an eight-year struggle between supporters and opponents of Thaksin Shinawatra.

The former prime minister may have been out of Thailand since 2008, but his populist policies -- which included subsidized healthcare and microcredit schemes targeted at a rural and impoverished electorate -- have made him the driving force behind governments that have won every election since 2001.

Even with the current elections, few are predicting that the opposition will settle for the result.

Ten people have already been killed since the demonstrations began last November. The results of the election, some analysts say, could be annulled if the opposition mounts a successful legal challenge in the country's increasingly politicized courts.

For Duncan McCargo, professor of Southeast Asian politics at the University of Leeds, a military coup is still not out of the question.

"The protestors appear to have no clear political agenda other than a desire to 'return' Thailand to an imagined pre-Thaksin era in which the ruling network and its supporters can still call the shots, and provincial voters can be marginalized," he told CNN.

"In the short term, they are trying to provoke a military coup of some kind."

At the heart of the protesters concerns is the fear that Thaksin, from his self-imposed exile in Dubai, is still exercising influence through his younger sister Yingluck Shinawatra, the current prime minister.

"There's no doubt that Thaksin has remained an influential figure, working through and behind the Yingluck government," McCargo said. "But Yingluck hasn't been Thaksin's 'clone,' as he originally hoped, and there has been ample evidence that she was often able to set her own agenda and to form her own political alliances."

Economy at the fault-line

Thailand's successful export-based economy itself is one of the faultlines of the current political discord.

While growth in Thailand, Southeast Asia's second largest economy after Indonesia, is slowing, the traditionally impoverished northeast of the country is booming.

Traditionally the poorest region of Thailand, Isan, in the northeast of the country, accounts for a third of Thailand's population. However, it is rapidly turning from its economic staple of subsistence farming to an economy driven by trade and services.

Economic growth in the region hit 40% from 2007 to 2011, compared with 23% for the rest of Thailand over that period and just 17% for greater Bangkok, according to government figures.

Isan, which once exported people to Bangkok and the rest of the world as cheap migrant labor, is seeing its workers return and is demanding greater political representation.

Prime Minister Yingluck Shinawatra has brought in a raft of measures that ensure Thaksin's populist policies continue to underpin the boom in the red shirt heartland.

Chief among them is a 2.2 trillion baht ($71 billion) infrastructure program aimed at the northeast and a nationwide minimum wage of 300 baht ($10) a day. In some parts of Isan, this boosted household incomes by more than 35%.

A rice subsidy, which guarantees farmers 40% above market price for their crops, has led to a conservative estimate of losses in the region of 136 billion baht ($4.3 billion). It has been widely criticized in Thailand and even recently drew fire from the International Monetary Fund, which urged the country to drop the $21 billion scheme.

As the boom fuels a growing middle class, Bangkok's elite now realizes that it ignores the northeast -- which holds a third of the electorate -- at its peril.

"In the past, Thailand was run by a relatively small Bangkok-based elite which I term 'network monarchy,' centering on the palace, the military, the bureaucracy and major business groups," McCargo said.

"While electoral politics have been the norm for more than 30 years, elected governments needed the blessing of this network in order to remain in office. Without this endorsement, governments quickly collapsed -- or were removed by military coups."

Meanwhile, for Thailand's growing base of unaligned voters, the latest political drama is just one more scene in an all-too familiar saga.

"I think I will post a blank ballot," one disgruntled voter from Korat in the northeast who did not want to be named, told CNN. "Once there were many parties but nowadays there's just two: Thaksin/Yingluck or Abhisit.

"To me both of them are troublesome -- they both have problems with corruption and they are both pushing their own agendas so hard they're splitting the country in two.

"Corruption has been with this country since the beginning of time, but when I was young there were some ex-prime ministers who really did a good job for their countries, even if they did line their pockets from the national budget too."