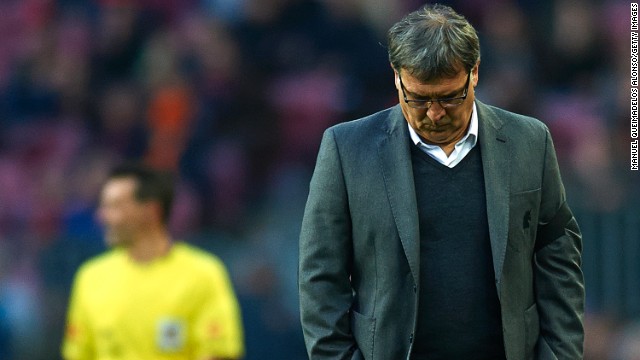 The Spanish champions face the prospect of losing the outright lead after a record 59-game run at the top following Saturday's shock 3-2 defeat by Valencia, in which key defender Jordi Alba was sent off against his former team.

"We will try to regain the ground that we will most likely lose this weekend. We still have to play against our direct rivals.

"I'm concerned and I want to bounce back from this as soon as possible."

Barcelona led through Alexis Sanchez but Daniel Parejo and Pablo Piatti put midtable Valencia head with goals either side of halftime.

Lionel Messi leveled with his first La Liga goal in four months when a penalty was awarded despite the ball appearing to hit Ricardo Costa in the shoulder, not his arm, but Francisco Alcacer restored the lead in the 59th minute before fullback Alba collected his second booking.

It was Barca's first league defeat at Camp Nou since April 2012, and only second in 22 league matches this season, leaving Martinez disconsolate.

"We had the impression that the match was over after half an hour and we paid for that. I said that we will pay for our errors, and we committed errors today," said the Argentine, in his first season in charge.

"Any error from now on out could cost us dearly. Their goal at the end of the first half hurt us and we lost confidence. Their second goal made us desperate."

Barca will next play seventh-placed Sevilla, which conceded two late goals in a 3-2 defeat that eased Malaga's relegation fears. Former Portugal winger Duda scored the winning home side's first from the penalty and then the 83rd-minute decider.

In Saturday's other games, there were 0-0 draws in the games between Levante and Rayo Vallecano, and Getafe vs. Valladolid -- which left all four clubs in the bottom half of the table.

In Italy, fourth-placed Fiorentina will likely lose ground on the top Serie A teams following a 1-0 defeat at Cagliari.

Meanwhile, Udinese moved away from the relegation zone with a 2-0 win at Bologna.

In Germany, second-placed Bayer Leverkusen ended a run of three losses by beating Stuttgart 2-1 at home.

Schalke moved up to fourth after beating 10-man Wolfsburg 2-1 with a late winner from midfielder Kevin-Prince Boateng, while Borussia Monchengladbach dropped to fifth following a 3-1 loss at Hannover.

In France, second-placed Monaco could only draw 2-2 at Lorient -- meaning next weekend's top-of-the-table clash with Paris Saint-Germain becomes even more important.

Champions PSG hold a five-point advantage following Friday's 2-0 win at home to Bordeaux, and it could have been even more if Layvin Kurzawa had not scored a late leveler for Monaco.