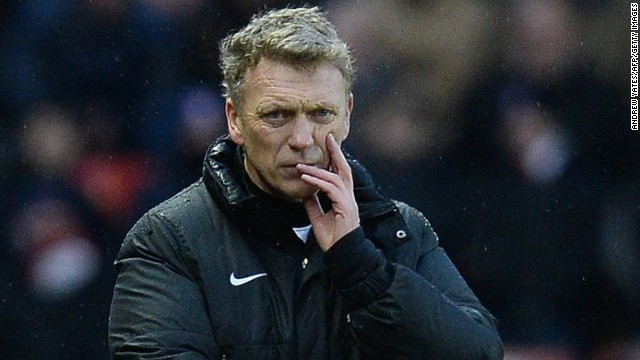 David Moyes was left with plenty to ponder after Manchester United's first league defeat against Stoke since 1984.
STORY HIGHLIGHTS

(CNN) -- Bad luck, or just another step in Manchester United's fall from dominance?

The club's share price may have recovered a little since last month's $61 million marquee signing of Juan Mata from Chelsea, but qualification for the lucrative European Champions League is looking further away than ever for beleaguered manager David Moyes.

Mata helped United win on his debut against lowly Cardiff in midweek, but the Spaniard could not stop his new team crashing to a 2-1 defeat at unfancied Stoke.

It means fourth-placed Liverpool can move nine points clear of United in the Premier League on Sunday with a win at struggling West Brom.

Table-topping Manchester City, meanwhile, will go 16 points ahead of United with victory over second-placed Chelsea on Monday.

Moyes has had a tough time since replacing Alex Ferguson, the most successful manager in the history of English football, and he was left bemoaning his fortunes after losing two players to injury and conceding a wickedly-deflected free-kick.

However, while Charlie Adam's first goal may have been fortuitous, his second -- which made Robin van Persie's equalizer redundant -- was a moment of magic as the Scottish midfielder smashed in a 25-yard thunderbolt.

It was United's eighth league defeat in 24 matches, compared to just five in 38 in Ferguson's championship-winning farewell. This is the club's worst run in the top flight since the 1989-90 season.

"We played well today," a defiant Moyes told MUTV. "We're definitely not getting a lot of good fortune going our way, but we've got ourselves to blame for the opportunities we missed.

"I think the free-kick summed it up. That went in after we'd controlled the majority of the game. I think it was going wide, but it took a wicked deflection and went in. That's when you know that your luck isn't in. It's just not going for us.

"It was a difficult day, the conditions were tough. We had opportunities to get at least a draw and they scored a world-class second goal which was hard to defend against."

While United's attack has been bolstered by the arrival of Mata and the return from injury of last season's top scorer Van Persie and England striker Wayne Rooney, Moyes' defensive options are looking thinner after Phil Jones was stretchered off before halftime and fellow center-back Jonny Evans suffered a calf injury.

"Phil is okay. He was unconscious for a period during the game, but he's had a head scan and the hospital has checked him and there were no problems," Moyes said.

It was Stoke's first league win against United since 1984, when manager Mark Hughes was a 20-year-old striker playing for the Manchester side.

His team leaped out of the bottom three up to 11th in the table after winning just its sixth game.

"That tells you how crazy the league is at the moment," said Hughes, whose side are just six points above bottom club Fulham.

Moyes' former team Everton, meanwhile, moved up to fifth place -- which would secure a spot in the second-tier Europa League next season -- with a 2-1 win over Aston Villa.

Tottenham, beaten 5-1 by Manchester City in midweek, dropped to sixth after being held 1-1 at Hull.

Brazil midfielder Paulinho, returning after a month sidelined by injury, canceled out new signing Shane Long's opener for the home side.

Newcastle failed to join seventh-placed Manchester United on 40 points after losing 3-0 at home to northeast rivals Sunderland, who completed a derby double and continued a resurgence under manager Gus Poyet by moving up to 14th.

Southampton consolidated ninth place with a 3-0 win at Fulham, who dropped to the foot of the table despite fielding two new loan signings, Denmark midfielder William Kvist and Tottenham's Germany international Lewis Holtby.

West Ham's relegation battle was boosted by a 2-0 win at Swansea that left the London team third from bottom, but star striker Andy Carroll was sent off after setting up both goals for Kevin Nolan.