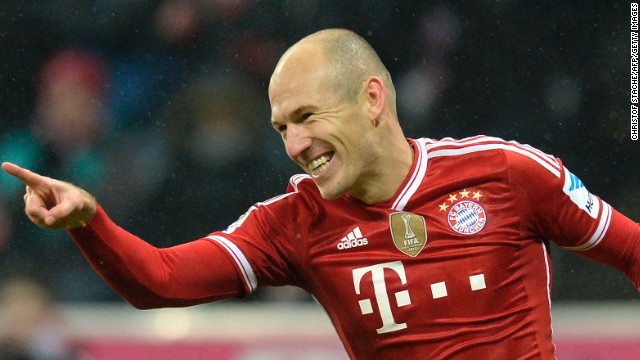 Arjen Robben celebrates after scoring Bayern Munich's third in the 5-0 rout of Eintracht Frankfurt at the Allianz Arena. 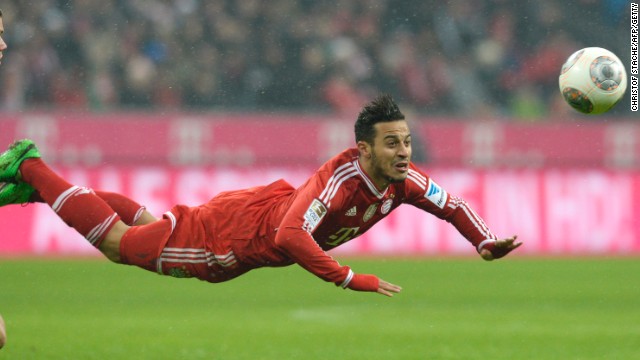 Thiago Alcantara makes one of his Bundesliga record 185 touches in the comprehensive victory for Bayern. 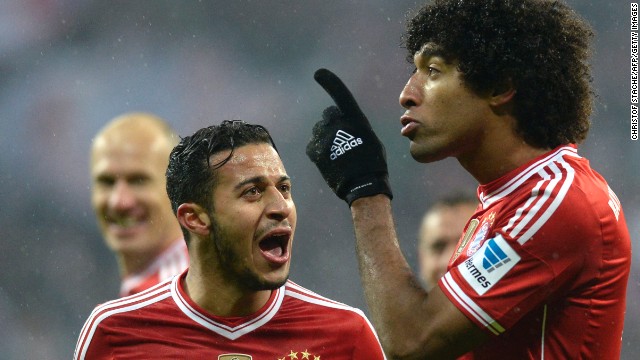 Thiago congratulates defender Dante after he scored Bayern's fourth goal in the victory over Frankfurt. 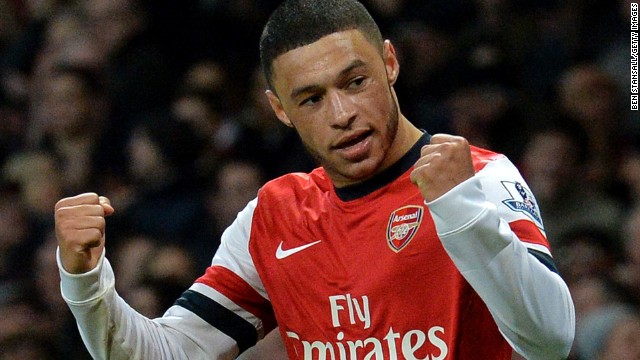 (CNN) -- Bayern Munich look simply unstoppable and uncatchable in the Bundesliga as Eintracht Frankfurt were the latest team to be swept aside Sunday with a 5-0 rout re-opening a 13-point advantage at the top.

It was Bayern's record 44th unbeaten game in the German championship and their third since returning from the midwinter break.

A 71,000 capacity crowd at their Allianz Arena witnessed another masterclass for last season's treble winners, which has left them with 53 points after 19 games.

With the domestic league title all but wrapped up, the big test for Pep Guardiola's men is their defense of the Champions League title and a last 16 clash with English Premier League Arsenal later this month is a mouthwatering prospect.

Arsenal began a crucial part of their season with a 2-0 home win over Crystal Palace Sunday as the returning Alex Oxlade-Chamberlain scored twice in the second half at the Emirates.

The victory has taken them back to the top of the standings two points ahead of Manchester City, who host third-placed Chelsea in a crunch clash Monday night.

Earlier Sunday, Liverpool lost more ground in the title race after being held 1-1 at struggling West Bromwich Albion in an earlier kick off.

Arsenal manager Arsene Wenger was delighted to have England international Oxlade-Chamberlian back in the fold, particularly after revealing new midfield loan signing Kim Kallstrom will likely be out until March with an ongoing back problem, missing the Bayern ties.

"It was a great day for Chamberlain," Wenger told Sky Sports.

"He was out for a long, long time and we needed to be patient to get him back to full fitness. He had a great game and scored two great goals."

With Bayern in their current form, Arsenal will have to be at their sparkling best to avoid a repeat of their defeat to the Bavarian giants in last year's Champions League.

Mario Goetz put Bayern ahead in the 12th minute against Frankfurt with a superb volleyed effort and Franck Ribery doubled the advantage just before the break.

It might have been an even wider margin of victory as the home side twice hit the woodwork before Arjen Robben scored the third shortly after coming on as a substitute.

Defender Dante added a fourth with 20 minutes to go and Mario Mandzukic rounded off the rout with a fifth.

Guardiola's influence on Bayern since taking over at the start of the season is also shining through.

While in charge of Barcelona's he helped them perfect their "tiki taka" style of quick passing -- which was also adopted by the all-conquering Spanish national team under the late Luis Aragones -- whose death was announced Saturday.

Guardiola signed midfielder Thiago Alcantara from Barcelona to Bayern on taking charge and the value of that acquisition was evidenced Sunday as the Spain international set a new Bundesliga record for touches of the ball against Frankfurt.

He passed the ball an incredible 185 times in the 90 minutes as Bayern dominated possession.

"They showed from the start who was the boss," purred ex-Bayern great and now club president Franz Beckenbauer.

"At the break they could have been three of four-nil ahead," he told AFP.

Bayer Leverkusen had briefly closed top within 10 points with victory over Stuttgart Saturday, with Borussia Dortmund a further four points adrift after a much-needed win on Friday.

Meanwhile, in Serie A, Juventus took a nine-point lead with a 3-1 home win over struggling Inter Milan.

With second-placed Roma's home match againsdt Parma abandoned after nine minutes in the Italian capital due to weather conditions, the champions moved further clear with a commanding display.