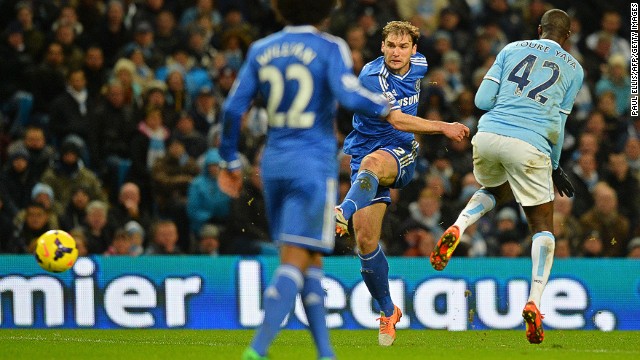 (CNN) -- Chelsea ended Manchester City's 100% home record in the English Premier League with a 1-0 win at the Etihad Stadium on Monday evening.

Home fans had enjoyed a feast of 42 goals in 11 previous home league fixtures this term, but it was Jose Mourinho's side who walked away with the spoils on this occasion.

The goal which ultimately settled the match came in the 32nd minute after a threatening Chelsea attack looked to have broken down.

Ramires had a shot blocked by Vincent Kompany after Eden Hazard had cut the ball back from the right, but the ball rolled out invitingly to Ivanovic who thundered a low left-foot drive past a helpless Hart.

It was a lead that Chelsea deserved after limiting City to few chances in the first half while operating nimbly on the break.

The visitors were unlucky not to double their lead a minute before halftime as the excellent Hazard this time found space on the left. His cross flashed across the six-yard box before falling at the feet of Samuel Eto'o, but the Cameroon striker could only direct his shot onto the bar.

The Blues were at it again in the second half when Nemanja Matic's rasping drive clattered the crossbar in the 53rd minute as Chelsea took control against an increasingly wasteful City side whose best chances came from long range.

Silva forced Petr Cech into a fine save from a 73rd-minute free kick and substitute Stevan Jovetic (on for Alvaro Negredo) also went close in injury time, but Chelsea held firm to record a vital win in the title race.

"I think we played fantastic," Mourinho told Sky Sports afterwards. "Against a fantastic team to play the way we did I think is amazing.

"The best team in the Premier League we beat them twice and especially today we were fantastic. They had a couple of chances to score but we had the better chances to kill the game and the players played with fantastic spirit," he added.

Chelsea return to the Etihad in just under two weeks to face City in the fifth round of the FA Cup, where they will look to inflict a third defeat on Pellegrini's side this season following tonight's win and their 2-1 league win at Stamford Bridge in October last year.

Defeat for City not only ends a run of 11 home league wins but an unbeaten run of 20 matches. It was also the first time they had failed to score at home since a 0-0 draw against Birmingham City way back in November 2010 -- a sequence stretching back 61 games.

Tonight's result sees Arsenal, who beat Crystal Palace 2-0 on Sunday, stay on top with 55 points from 24 matches. Chelsea stay in third, but are now level on 53 points with second-place City.

Two other games were played in Europe on Monday. In Serie A, Sampdoria beat Genoa 1-0 while in La Liga Villarreal's 3-1 win against Osasuna moves them to 40 points and within three of fourth-placed Athletic Bilbao.