NFL or the Olympics? Carlin Isles turns to prayer to decide his future 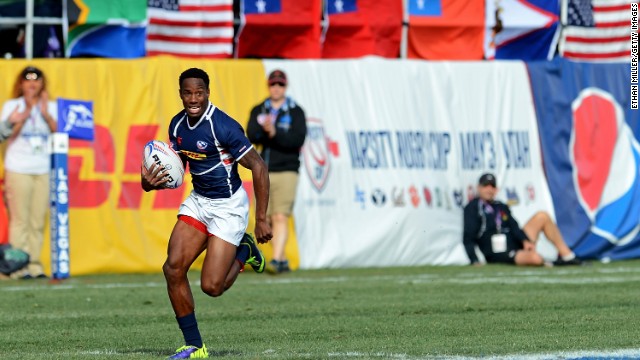 Carlin Isles was in outstanding form for the American team at January's HSBC Las Vegas Sevens and scored a superb try against Uruguay. 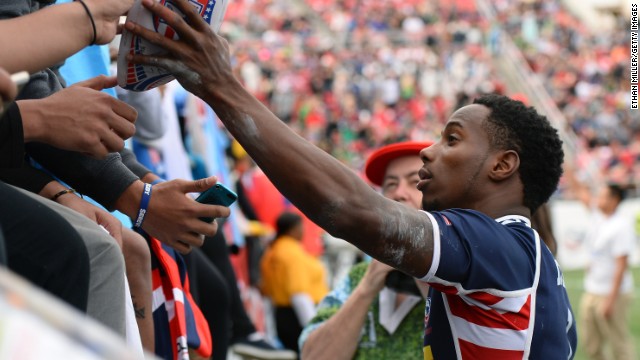 Isles was the focus of attention for local fans who packed the stadium in Las Vegas to watch the U.S. team take on the best in the world. 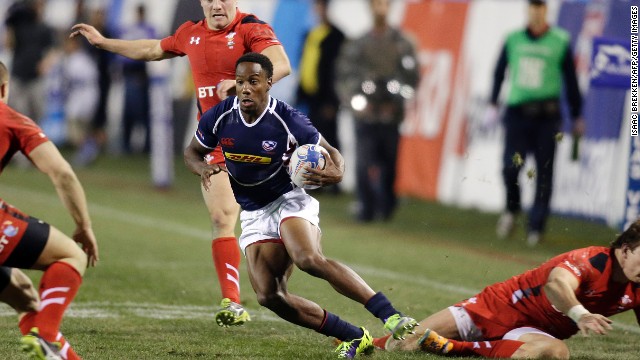 Isles has the Welsh defense in disarray as he goes on a typical jinking run at Las Vegas. 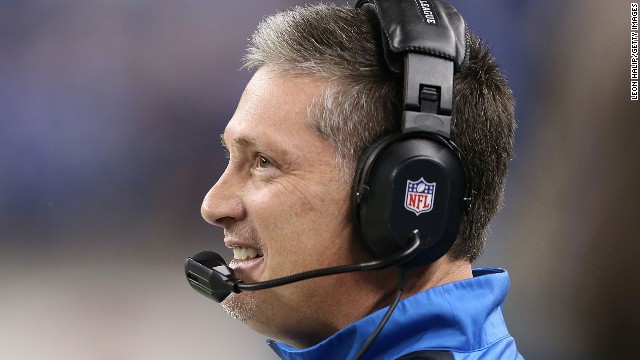 Detroit Lions coach Jim Schwartz was so impressed by Isles that he recruited the former track athlete on a practice contract last December. 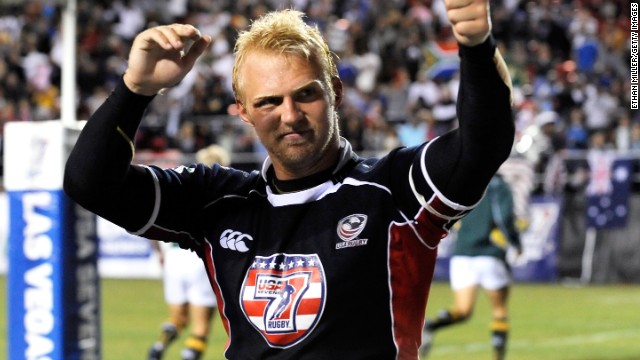 South Africa-born U.S. coach Matt Hawkins was a former standout for the Eagles during his playing days and has helped to school Isles in rugby tactics. 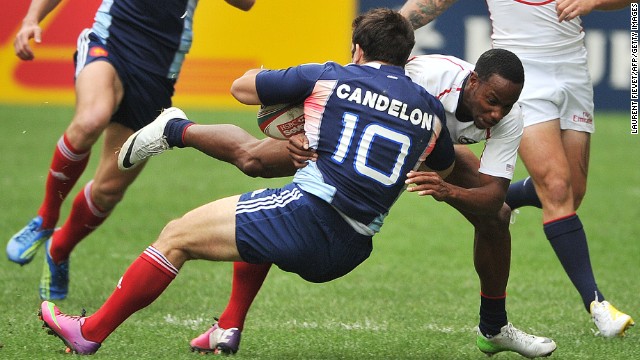 France's Julien Candelon is on the receiving end of a tackle by Isles during last year's Hong Kong Sevens tournament. 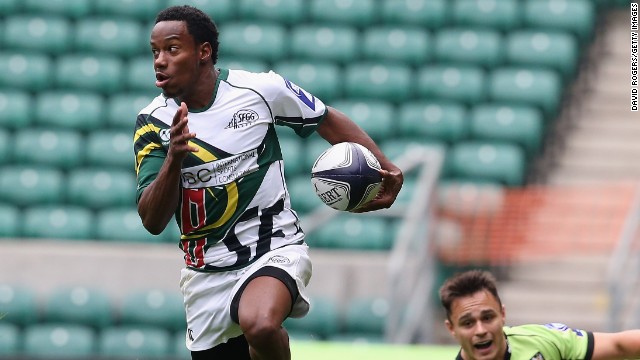 Isles scores a try while playing for San Francisco against top English side Northampton Saints during the World Club Sevens at Twickenham last August. 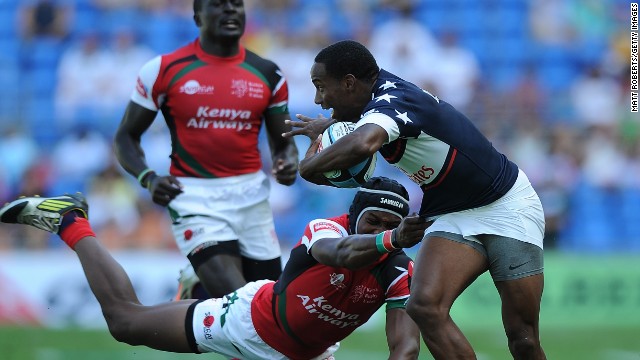 Isles is about to burst clear to score against Kenya during Gold Coast Sevens tournament in Australia last year.
HIDE CAPTION
Star attraction
Local hero
Catch me if you can
Lure of the Lions
Rugby mentor
Tough tackler
Try machine
Worldwide attraction
<<
<

(CNN) -- With his quicksilver speed and ability to score breathtaking tries, Carlin Isles is blessed with a god-given talent.

But the "fastest man in world rugby" is looking for divine inspiration as he weighs up the most difficult decision of his life.

Isles is a standout for America's rugby sevens team, which is one of the sport's growing forces and has a realistic chance of qualifying for its Olympic debut in Rio in 2016.

But he is also being courted by the NFL -- after training with the Detroit Lions he has signed a practice contract, the first step towards gaining a full-time place on the roster.

So ultimately Isles will have to choose. Either a shot at Olympic gold or the chance to earn untold riches as a wide receiver or running back in American football.

The 24-year-old from Ohio professes to be not influenced by money, but told CNN that he is being guided the power of prayer in making the toughest of choices.

"When it comes down to the Olympics vs. the NFL I have to choose wherever God wants me to go," he says.

"I have to listen to my heart and do things for the right reasons."

Isles' value to the American Eagles squad was no more apparent than at the HSBC Las Vegas Sevens last weekend, where his electrifying pace helped the United States team to win the Shield competition with a 31-0 rout of Spain to finish ninth overall.

He suggested after the tournament that Vegas might have been his last sevens outing, but he has been included in the U.S. team for this weekend's event in Wellington, New Zealand. 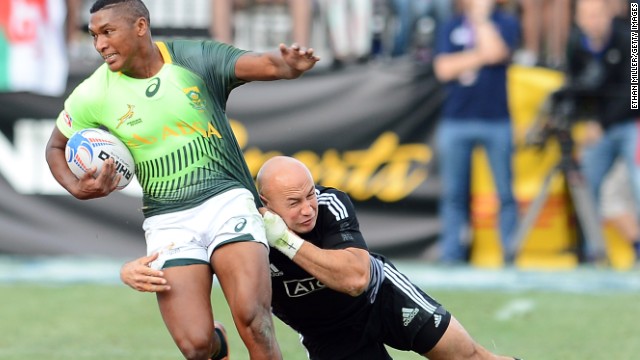 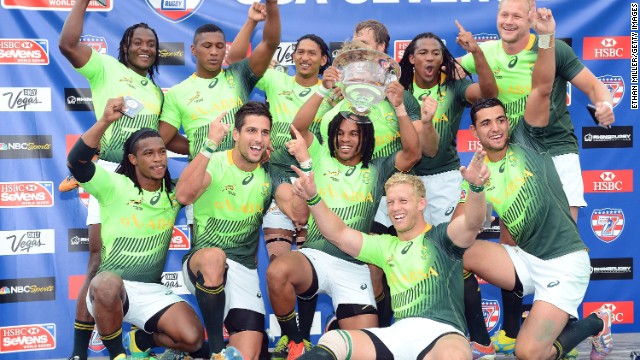 The South Africans set a record with their U.S. success, conceding only 14 points in their six matches. 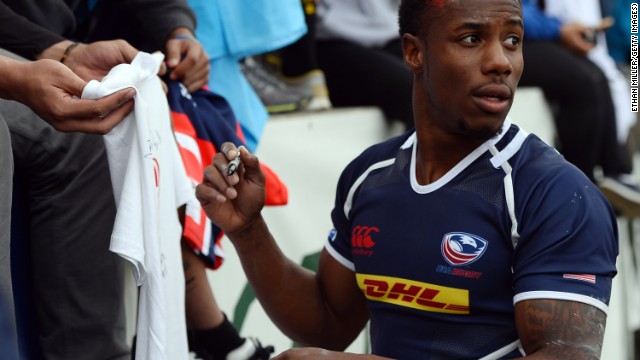 U.S. star Carlin Isles scored a superb try on Friday on the first day in Las Vegas, though the Americans lost 19-12 to Argentina before being beaten 14-12 by France. 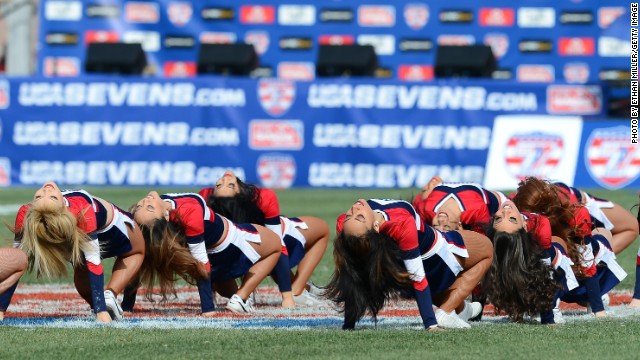 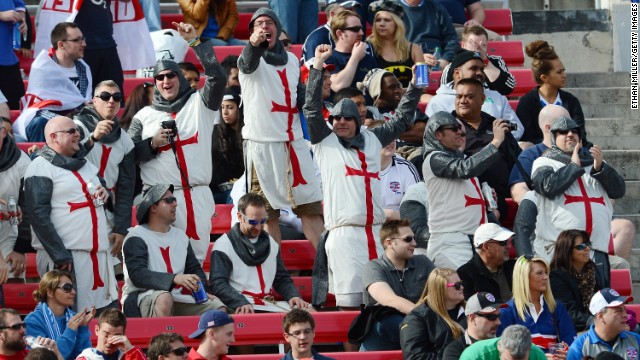 A former collegiate track and field star with a personal best of 10.13 for the 100 meters and the ability to run 40 yards in 4.2 seconds, he is relatively new to rugby union, but since finding a spot on the American team in 2012 has terrorized the defenses of even the top nations such as New Zealand.

Collections of his best tries have gone viral on YouTube, but may also have alerted the scouts from gridiron that a very special talent was under their noses.

As well as his track and field exploits, Carlin played college football as a wide receiver for Ashland University, a NCAA Division II school, and did enough in his week with Detroit to persuade them to take a further look at him as he signed a reserve/futures contract on January 10.

"But for me, my work ethic and my stamina from playing rugby sevens played a big factor."

While clearly flattered to have the chance to play in one of the most lucrative sporting leagues in the world, the dilemma for Isles is there for all to see.

"Even thinking about it I've been stressed," he admits.

"You know because it's a big decision, both of them are both blessings because rugby has been the biggest blessing to me in my life and I love rugby to death.

"To juggle the two is going to be a little difficult, but I thank God I have the ability to focus and always stay hungry."

Under young coach Matt Hawkins, the American squad has been training full-time at the U.S. Olympic facility in San Diego with a constant reminder of the history and tradition of the Summer Games.

Every day the drive through the gates with the Olympic rings above acts as a prompt of the importance of the ultimate goal and Isles knows that the 2016 Games is getting ever closer -- almost within touching distance.

"Yeah it's coming up fast because this season is almost over and then 2015's about to come, so two years is going to come quick," Isles acknowledges.

By a quirk of Games history, the United States, hardly a rugby superpower in the intervening years, would be defending the title it won back in 1924 in Paris when rugby was last part of the Olympic program.

Then it was the full 15-a-side game, but when the IOC voted to reintroduce rugby for the Summer Games, it opted for the seven-a-side version of the game.

With less players on a big pitch, players with the pace and trickery of Isles are literally worth their weight in gold and it offers nations such as the United States the chance to compete on more equal terms with the likes of world champions New Zealand and other traditional powers such as Australia, South Africa and England.

Hawkins has gone on record to say he will support Isles whatever he ultimately chooses to do with his talents.

"We understand that we can't hold on to everyone, and for some people our program is a stepping stone to other goals and achievements," Hawkins told CNN.

"We have enjoyed our time with Carlin and wish him all the very best for his new venture and we will be watching closely to see how he progresses."

If his star player does eventually make the breakthrough to the NFL, the calendars of the respective sports will collide -- the HSBC Sevens World Series stretches from October to May.

"If I end up choosing just to do football, of course I won't be able to play as many tournaments and basically I'd have to focus on football," Isles admits.

"I'm just trying to work out things and figure out what's going to be the best for me."

Lions coach Jim Caldwell will be hoping the gamble of his sacked predecessor Jim Schwartz on the slight but lightning quick Isles -- who at 5 foot 8 inches (1.72 meters) and 159 pounds (72 kg) would be dwarfed by some of imposing physiques in the NFL -- does indeed provide a winning return.

For Eagles coach Hawkins, ahead of next year's Olympic qualifying program where Canada is likely the main opposition for a place in Rio, the decision Isles eventually makes could also influence his future.

"The door is always open for Carlin," he said.