Bayern Munich march on with win against Nuremburg 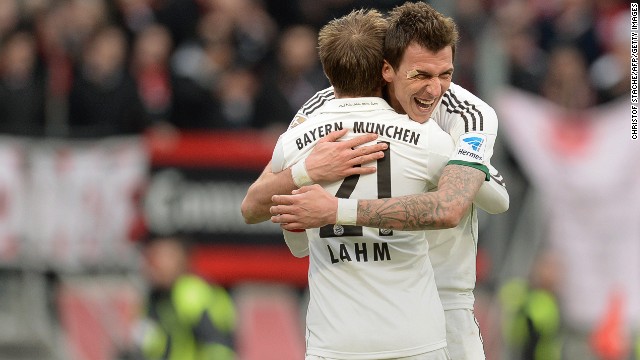 (CNN) -- Bayern Munich's unbeaten run in the Bundesliga continued on Saturday as they beat Nuremburg 2-0 at the Grundig Stadium.

Pep Guardiola's side have dropped just four points all season and have now taken maximum points from their last 11 games.

The result not only extended their unbeaten league record to 45 matches but also equals their own record of 29 consecutive away games without losing set during the 2011/12 season.

Nuremburg had won their last two league matches, but Bayern were soon in front as striker Mario Mandzukic volleyed home in the 18th minute.

The 27-year-old Croatian international turned provider four minutes into the second half laying on the ball for Philipp Lahm to drive the ball home and double the lead.

There could have been more goals for the visitors but in the end two were enough to see the Bavarians extend their season tally to 56 points and restore a 13-point lead following second-placed Leverkusen's 1-0 win at Monchengladbach on Friday.

Borussia Dortmund recorded back-to-back league wins for the first time since November with a thumping 5-1 win at Werder Bremen.

Elsewhere, there was an encouraging 3-0 win for Frankfurt against bottom-of-the-table Braunschweig who look increasing doomed to drop out of Germany's top league. Armin Veh's side, meanwhile, move up to 12th place.

Sixth-place Wolfsburg were also 3-0 winners against Mainz on Saturday while Freiburg and Hoffenheim drew 1-1.