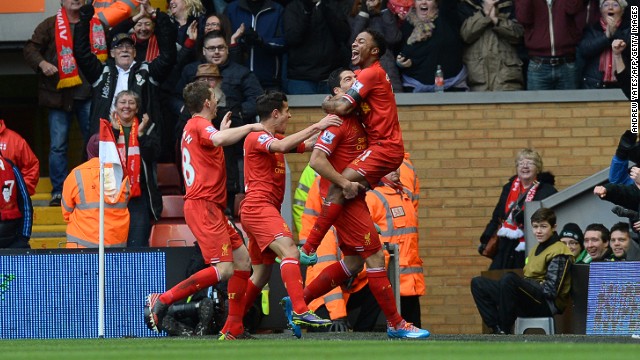 Raheem Sterling (right) celebrates with his teammates after scoring Liverpool's third goal against Arsenal at Anfield on Saturday.
STORY HIGHLIGHTS

(CNN) -- Arsenal surrendered top spot in the English Premier League are being walloped 5-1 by Liverpool at Anfield on Saturday.

The Gunners were left shell-shocked as the Reds ran riot in the opening quarter of the match.

Martin Skrtel put the home side ahead in the opening minute, redirecting Steven Gerrard's free kick past Wojciech Szczesny.

The Slovak center back doubled the lead nine minutes later with a looping header from a corner kick before Raheem Sterling tapped in from close range in the 16th minute after Luis Suarez swept in a low cross from the right.

It's not the first time we've been outstanding at home, but everything about us today was incredible.
Brendan Rodgers, Liverpool coach

Worse was to come for the visitors four minutes later when Daniel Sturridge side-footed home a fourth after meeting a superb through ball from Brazilian midfielder Philippe Coutinho.

Arsenal were lucky not to concede again in the first half but soon found themselves five goals down when Sterling scored at the second attempt in the 52nd minute after Szczesny had blocked his original effort.

Mikel Arteta scored a consolation goal in the 69th minute -- converting from the penalty spot after Gerrard had fouled Alex Oxlade- Chamberlain in the box moments earlier.

But nothing could hide the fact that this had been a crushing defeat for the North Londoners as they chase a first league title in a decade.

Arsenal manager Arsene Wenger described it as "a very poor day" after the match.

"Only the fans were good for 90 minutes. All the rest on our side, we were poor -- defensively, offensively -- and (the goals) were all scored in slow-motion," Wenger told BT Sport.

"Overall, on top of that, we were caught on two set-pieces at the start. But the performance was very poor and Liverpool played very well, so congratulations to them. We have to bounce back from that, and as quickly as possible."

"It was an incredible performance. It's not the first time we've been outstanding at home, but everything about us today was incredible. Everything was outstanding.

"We've been getting better and better. We've got a lot of young players, developing well. But for us it's just about improving."

Arsenal, who play Manchester United in their next league match on Wednesday, drop one place to second, while Liverpool consolidate fourth place and now have 50 points.

Jose Mourinho's side, who outwitted City on Monday, outplayed their Geordie visitors at Stamford Bridge on Saturday.

Eden Hazard, who played a starring role in the 1-0 at the Etihad Stadium, turned in another star performance this time scoring a hat-trick to lift the Blues to 56 points, one point ahead of Arsenal.

Manuel Pellegrini's usually free-scoring City side failed to find the net for the second successive match drawing 0-0 at Carrow Road -- a result which sees them slip down to third with 54 points.

Two goals from Kevin Nolan at the start of the second half saw the Hammers ease to a 2-0 win away to Aston Villa. The result lifts them to 14th in the table, one place and one point below Crystal Palace who beat West Bromwich Albion 3-1 at Selhurst Park.

Southampton and Stoke City drew 2-2, but Sunderland, after an emphatic win 3-0 against local rivals Newcastle in the Tyne-Wear derby, slumped to a 2-0 defeat against Hull City.