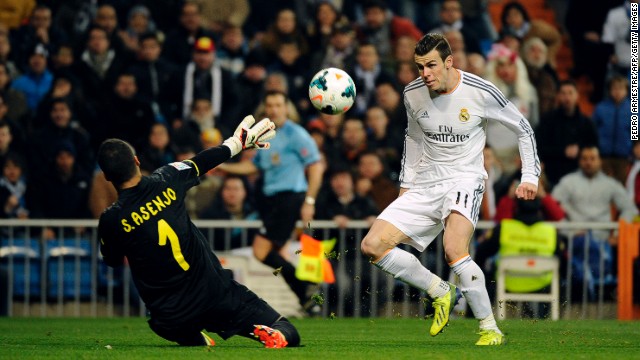 Gareth Bale dinks the ball over Villarreal keeper Sergio Asenjo to put Real Madrid ahead in the Bernabeu on Saturday.
STORY HIGHLIGHTS

(CNN) -- Real Madrid shot to the top of La Liga on Saturday night after they won and their city rivals Atletico suffered a shock loss at Almeria.

Relegation-threatened Almeria scored twice in the last 10 minutes to seal an unlikely victory with both goals coming courtesy of midfielder Verza -- the second from the penalty spot after Atletico goalkeeper Daniel Aranzubia saw red.

Carlo Ancelotti's side had a more routine evening at the Bernabeu in large part thanks to Gareth Bale.

With Cristiano Ronaldo serving the first game of a three-match suspension after being sent off last weekend, it was left to the Bale, who returned to action after missing the three previous games with a calf injury, to guide Los Blancos to three points.

The Welsh international put Real ahead in the seventh minute, seizing on a mistake by center back Chechu Dorado before chipping the ball home past goalkeeper Sergio Asenjo to score his 11th goal of the season.

Eighteen minutes later, Bale turned provider with a cross from the right which was met by Karim Benzema who doubled the lead.

The visitors put themselves back in the game two minutes before the break with a superb strike from Mario Gaspar, but Madrid settled supporter's nerves by re-establishing a two-goal lead in the 64th minute -- 20-year-old striker Jese providing the finish.

Back came Villarreal five minutes later with a Giovani Dos Santos free kick which set up what could have been a nervous last 20 minutes for the home side, but the game was put to bed by Benzema with his second of the night in the 76th minute.

The results give both Real and Atletico 57 points from 23 games but with Real shading the goal difference by one (plus 41 goals versus plus 40).

Elsewhere in La Liga, Rayo Vallecano recorded a resounding 4-1 win over Malaga to lift the second-from-bottom side level on 20 points with 18th place Valladolid who play Elche on Sunday.

Valencia moved up to eighth with an even more emphatic win following their brilliant 3-2 win at the Nou Camp last weekend.

A 5-0 drubbing of bottom side Betis Sevilla means Juan Antonio Pizzi's side are now level on 31 points with Sevilla who will be hoping they can repeat Valencia's trick when they host Barcelona on Sunday evening.

Over in Italy, there were wins for all three home sides on Saturday.

Leaders Juventus travel to Hellas Verona on Sunday while second-place Roma will face local rivals Lazio in the Stadio Olimpico.

A busy day of European football was marred by tragedy off the pitch as Shakhtar Donetsk announced their Brazilian striker Maicon Pereira de Oliveira had been killed in a car accident.

I have no words. We have lost a very good man, a friend, a colleague, a friend. This is a difficult and tragic moment in the life of Shakhtar and its fans
Darijo Srna, Shakhtar Donetsk captain

A statement published on the club's website read: "FC Shakhtar regretfully informs that on 8 February 2014 the life of a footballer Maicon Pereira de Oliveira tragically ended. He died in a car crash in Donetsk."

"He was a talented footballer, open and friendly guy. Maicon loved life and knew how to make it positive and bright. Tragic, untimely and absurd death took away a wonderful person from our ranks. Maicon was only 25 years old.

"It is a terrible bereavement for each of us. FC Shakhtar expresses condolences and sympathy to Maicon's family and friends. May he rest in peace..."

Maicon joined the Ukrainian champions from Volyn Lutsk in 2012 and made six appearances. At the time of his death he was on loan to fellow Ukrainian side Illichivets Mariupol.

Shakhtar captain Darijo Srna said: "I have no words. We have lost a very good man, a friend, a colleague, a friend. This is a difficult and tragic moment in the life of Shakhtar and its fans."