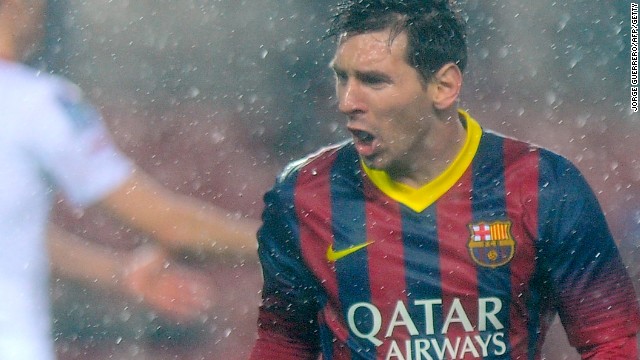 A soaked but happy Lionel Messi after scoring one of his two goals in Barcelona's 4-1 victory at Sevilla.
STORY HIGHLIGHTS

(CNN) -- Lionel Messi scored twice as Barcelona went back to the top of La Liga in a three-way title race with a 4-1 victory at Sevilla Sunday.

The win drew them level on points with Real Madrid and Atletico, but at the summit because of a superior goal difference.

The margin of victory in atrocious and wet conditions would have also helped the defending champion's cause but they had to come from behind to secure the win.

Alberto Moreno had put the hosts into an early 15th minute lead as his low strike deflected past Victor Valdes.

More might have followed as Carlos Bacca hit the post with a header but Barca were level as Messi's free kick found Alexis Sanchez, who appeared to be in an offside position before scoring.

Messi, returning to his best after his injury layoff, put the Catalans ahead before the break with a superb half-volley.

He hit the third early in the second half and Cesc Fabregas rounded off the scoring to make the three points safe.

With 15 rounds remaining of the tightest Spanish title race in years, all three teams at the top have 57 points.

All three are also still involved in the Champions League at the last 16 knockout stage as the season on a domestic and European level moves to an exciting climax.

In Italy's Serie A, defending champions Juventus maintained a nine-point advantage over Roma at the top despite being held to a 2-2 draw at Verona.

Argentina star Carlos Tevez put Juve two up inside 21 minutes, but second half goals from Luca Toni and substitute Juan Gomez in stoppage time, salvaged a point for the home side.

Roma were held to a goalless draw by Lazio and failed to make up ground.

An own goal from PSG captain Thiago Silva cost them three points after Javier Pastore put them ahead after eight minutes.

But they still lead big-spending Monaco by five points with 14 rounds remaining.