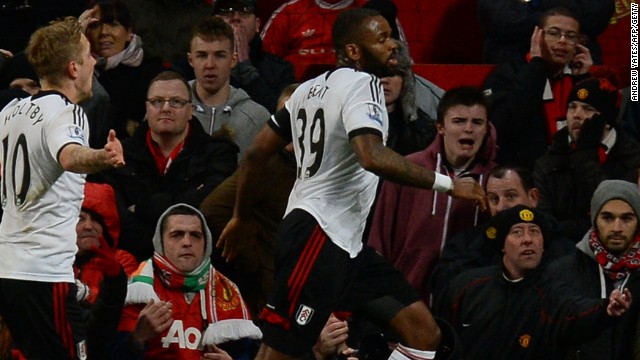 (CNN) -- Manchester United's sorry defense of the English Premier League title continued Sunday as they were held to a 2-2 draw at Old Trafford by bottom club Fulham.

Darren Bent grabbed an injury time equalizer for the visitors, who had led for much of the match through Steve Sidwell's first half strike in the 19th minute.

Two minutes later Michael Carrick looked to have sealed three points but it was his mistake which gave Bent the opportunity to head home in the fourth minute of added time.

The dropped points heap further pressure on under fire manager David Moyes with his team nine points adrift on arch-rivals Liverpool, who are occupying the fourth and final Champions League spot.

He was left frustrated after careless errors and poor finishing allowed Fulham to claim a point.

"Today was as bad as it gets," he told BBC Sport. "We dominated the game and how we did not win it I do not know.

"We made a couple of defensive lapses and it costs us," he added.

Fulham, who were avoiding defeat for only the fourth time in 17 games, showed redoubtable spirit and after Sidwell had converted on-loan Lewis Holtby fine pass, Kieran Richardson, a former United player, missed a great chance to put the visitors 2-0 ahead.

Carrick's shot then deflected past the excellent visiting goalkeeper Maarten Stekelenburg until the late drama to stun the home faithful.

Everton had the better of the first half and home goalkeeper Hugo Lloris made crucial saves, but after the break Spurs offered more threat, with Emmanuel Adebayor grabbing the only goal of the match.

He was alert after Kyle Walker's quick free quick and blasted a fine shot past Tim Howard in the 65th minute.