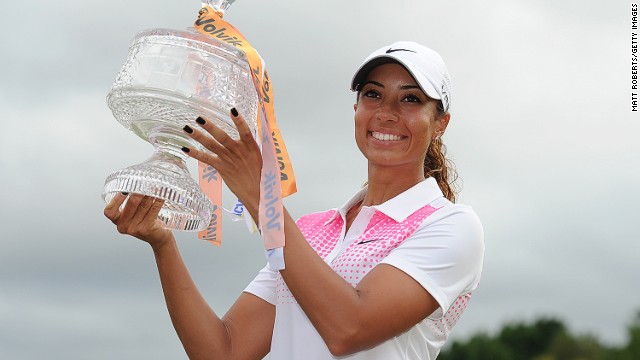 (CNN) -- Tiger Woods' career may or may not be on the wane, but the fortunes of his niece, Cheyenne are most definitely on the rise.

The 23-year-old, who is the daughter of Tiger's older half-brother Earl Dennison Woods Jr., stormed to her first major tour title on Sunday winning the Australian Ladies Masters.

Woods, fired a four-under par 69 in the final round at the RACV Royal Pines Resort course on Queensland's Gold Coast to finish on 16-under, two shots better that 17-year-old Australian amateur Minjee Lee.

"This is a huge accomplishment for me," Woods said afterwards at the event sanctioned by the European and Australian Ladies' Tour.

Gold Coast, you've been good to me this week. Can't wait to come back again next year!

"All off season I was just getting ready with my coach back home and he told me he thinks that this is my year, my time to finally get a win and to have it this early in the season is exciting, especially with the European Tour and then here in Australia," she added.

"I'm just really proud with how I played this week and followed through all four days and finished strong."

Woods, who turned pro in 2012 and joined the Ladies European Tour last year, had a one-shot lead after 54 holes and got off to the best possible start in the final round opening up with a birdie.

A bogey followed at the fourth, but it was the only blot on her scorecard. A birdie at the ninth and then three more on the back nine, including a birdie four at the last, saw her secure top spot.

Along with an elegant crystal trophy, Woods picked up a winner's check for €37,500 ($51,000), nearly five times more than Tiger has earned on the PGA Tour so far this year.

Woods missed the cut in her last tournament -- the New Zealand Women's Open -- but arrived in Australia with a new attitude, she said.

"I didn't play well last week but I came into this week with a new mindset, I worked on a few things and everything just kind of clicked.

Way to go @Cheyenne_Woods ! A great win and accomplishment. I'm so proud of you.

"It worked out really well, after the first round I knew I could win, so from then on that was the goal."

Tiger Woods will next be in action at the Honda Classic in Palm Beach, Florida which gets underway on February 27.