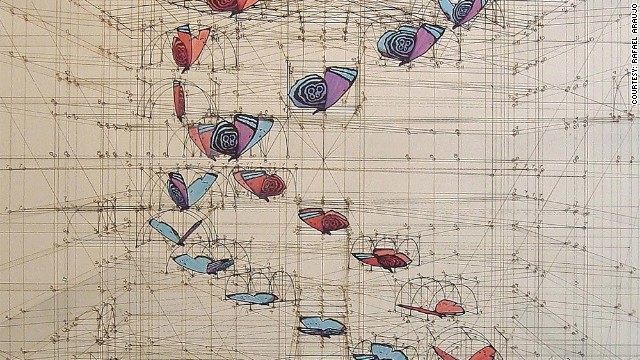 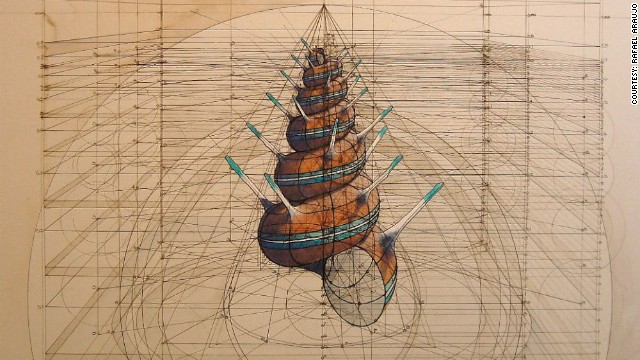 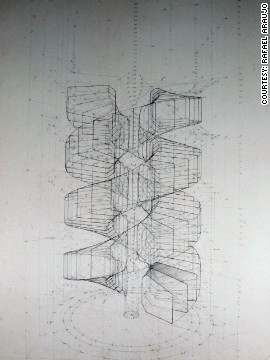 It takes him more than 100 hours to create an illustration, and that's if everything goes to plan. Here, a drawing is shown in its early stages. 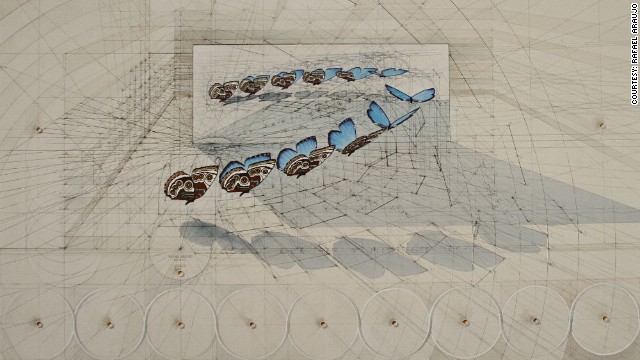 Araujo begins many of his drawings by creating a scaffolding, which helps guide his lines. 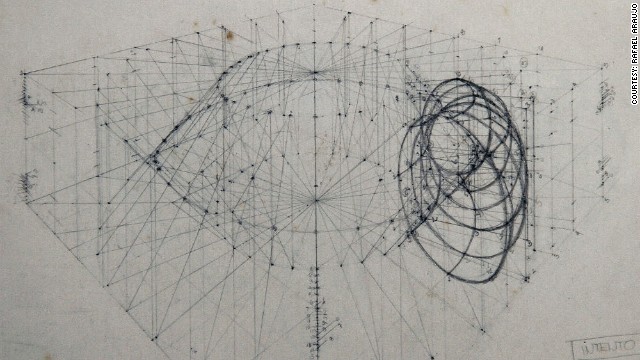 Each of the main shapes sits within a line-drawn square or rectangle. 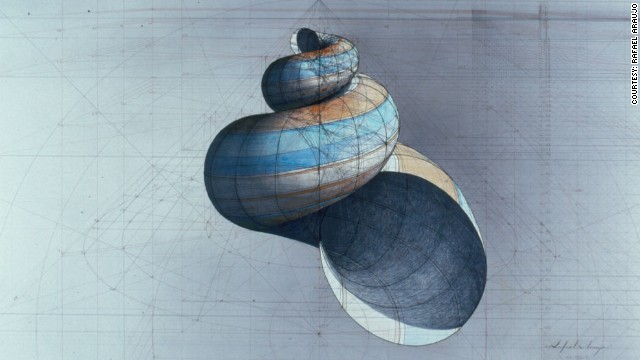 Shapes slowly appear from a web of dots and lines, like this shell which develops from a conical structure. 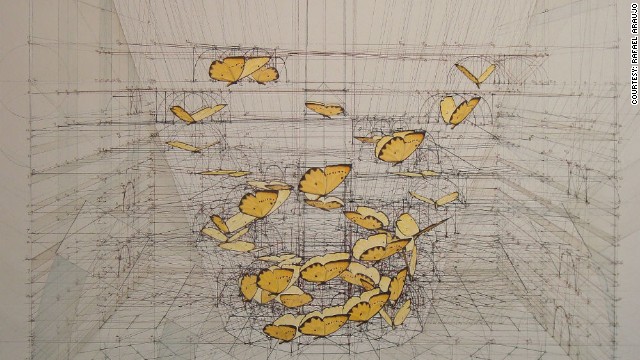 Butterflies take flight amid a web of perfectly drawn lines and helixes. 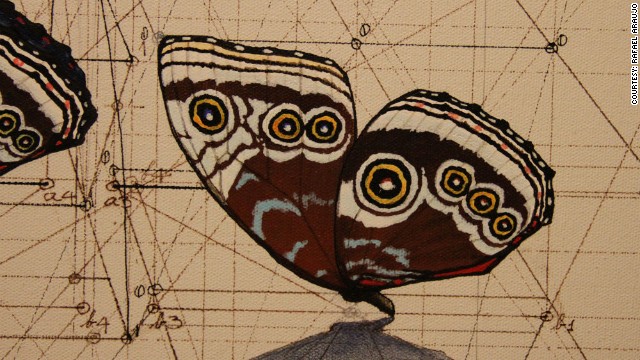 As soon as he's finished drawing ink onto the canvas, Araujo fills in details with acrylic paint. 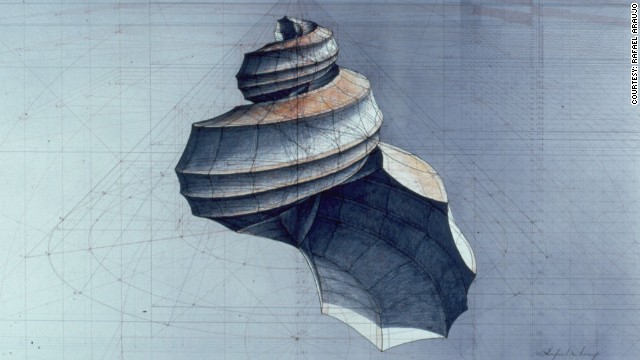 "When I was young I began drawing perspective almost out of the blue," Araujo says. 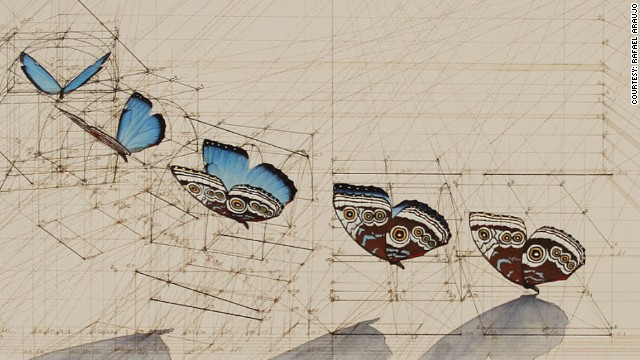 Detail of the butterflies which take flight amid a web of lines and helixes. 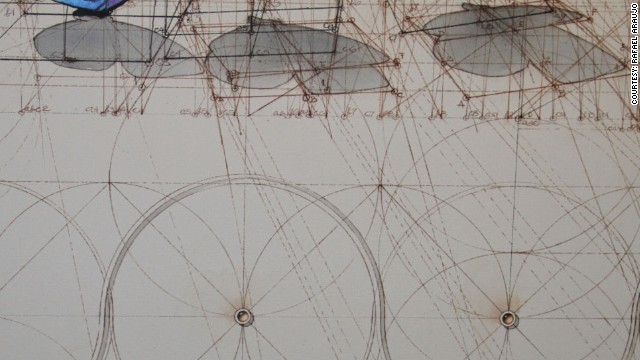 Araujo says that when he was young he loved three-dimensional drawings, and liked to find out ways to locate dots in the space.
HIDE CAPTION
The science of art
A master of geometry
A structure emerges
Constructing the image
Order in complexity
Symmetry of nature
Beauty of precision
Attention to detail
Three-dimensional wonder
Visual complexity
Science of art
<<
<

(Wired) -- Rafael Araujo's illustrations are bewilderingly complex - so complex that you might assume the artist uses a computer to render the exacting angles and three-dimensional illusions. And true, if you were to recreate his intricate mathematical illustrations using software, it probably wouldn't take you long at all. But the craziest part of all is that Araujo doesn't use modern technology to create his intricately drawn Calculations series - unless, of course, you count a ruler and protractor.

The Venezuelan artist crafts his illustrations using same skills you and I learned in our 10th grade geometry class. Only instead of stashing those homework assignments deep into the locker of his brain, Araujo uses these concepts to create his da Vinci-esque drawings. In Araujo's work, butterflies take flight amidst a web of lines and helixes, a shell is born from a conical spiral, and the mathematical complexity of nature begins to make sense. 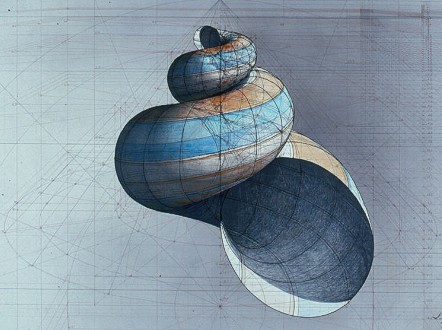 He says perspective and angles have always come naturally to him. "When I was young I began drawing perspective almost out of the blue," he recalls. "I loved three-dimensional drawings and liked to find out ways to locate dots in the space." Before computer-assisted drawing, there were artists like M.C. Escher, who Araujo counts among his biggest influences. "When I first saw M.C. Escher, I was speechless," he says. "His artwork was so akin to my geometrical taste."

Working on an old drafting table, Araujo began drawing his own perspective illustrations, eyeballing the trigonometry to plot dot sequences that would allow him to create curved shapes like double helixes and cones. If you look closely at Araujo's drawings, you'll notice each of the main shapes sits within a line-drawn square or rectangle - he began adding this to his works after realizing these scaffolding boxes created a more reliable way to correctly position the dots. "There is naturally a learning curve," he says. "And as problems are solved, you become more adept and, again, daring."

Painting is very similar to cooking. You've got to be always careful!
Rafael Araujo

As Araujo became more confident in his skills, he began adding ink-drawn butterflies, insects and shells to the canvas and painting them with acrylic in order to add visual complexity to his work. Each illustration takes him upwards of 100 hours, and that's if he doesn't mess up. "Painting is very similar to cooking," he says. "You've got to be always careful!"

Read more: These shimmering LED installations transport you to an alternate universe

Even with the added embellishments, his work is restrained and exacting. But that scientific honesty is also what makes his illustrations so visually compelling. Scientists and mathematicians often say there's a comfort in their work because they know there's always a right and wrong answer. It's the same with Araujo's art.

There's little gray area to be debated when it comes to angles and lines, and somehow that reliability and predictability translates into something beautiful. "I love Pollock, and enjoy very much casting paint onto a canvas without rules," he says. "But you've got to make it to appear, if not "beautiful," well done, and that is difficult."

Swirling Time-Lapse Nudes Capture the Allure of Bodies in Motion

How the NSA Almost Killed the Internet