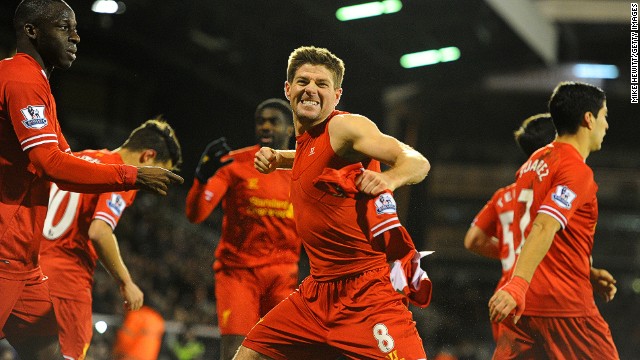 Steven Gerrard (center) celebrates in front of Liverpool's traveling fans after scoring the winner against Fulham on Wednesday.
STORY HIGHLIGHTS

(CNN) -- Steven Gerrard scored a 90th minute penalty to grab a precious 3-2 win for Liverpool against Fulham on Wednesday as Brendan Rodgers' side moved to within four points of the English Premier League leaders Chelsea.

Following Jose Mourinho's side disappointing 1-1 draw at lowly West Bromwich Albion on Tuesday, Liverpool came from behind twice to complete a dramatic and potentially vital win at Craven Cottage.

Kolo Toure, who gifted West Brom an equalizer at the Hawthorns earlier this month, scored an own goal in the eighth minute to hand the home side a boost following their 2-2 draw against Manchester United at Old Trafford on Sunday.

Daniel Sturridge equalized for the Reds four minutes before the break only for Kieran Richardson to put Rene Meulensteen's side ahead again in the 63rd minute after some slack defending.

The Dutch keeper was replaced by David Stockdale a few minutes later following a collision with Luis Suarez.

And it was the English keeper who had to face Gerrard's spot kick after Sturridge was brought down by German defender Sascha Riether.

The veteran midfielder fired home to complete only Liverpool's fifth away win of the season which, following a 5-1 demolition of Arsenal at the weekend, takes Rodgers' side up to 53 points and four points off top spot. Fulham remain bottom with 20 points.

"Steven Gerrard is peerless in situations like that," Rodgers said.

"He showed brilliant composure. It was a great result. We've had to show character to come from behind twice.

"We're going to keep pushing. We're chasing, other teams are still ahead of us. We need some of them to drop points."

Arsenal attempts to return to the top were thwarted by Manchester United in a 0-0 stalemate at the Emirates.

The result, which helps neither side massively, sees the North Londoner's stay one point behind Chelsea while United remain in seventh with 42 points.

While Arsenal dominated possession, it was United who probably had the best chances to win the game. But goalkeeper Wojciech Szczesny denied the away side with some fine saves, notably from former Gunners striker Robin van Persie at the beginning and towards the end of the game.

"We tried tonight to win it but we got a point," Moyes said.

"I'd have liked all three but if you'd have said to me at the start of the season that we'd get four points off Arsenal then I'd say that's not that bad."

There was some cheer off the pitch for United today as they reported an 11.6% rise in revenues to £122.9 million ($204 million) in the last three months of 2013 despite some below par performances this season.

Alan Pardew's side's third consecutive league defeat sees them slip further out of contention for a Europa League place next season, but with 37 points the Magpies are still nine points clear of 10th place Swansea City who drew 1-1 with Stoke City.

Meanwhile in Spain, Barcelona completed a 3-1 aggregate win over Real Sociedad to reach the final of the Copa del Rey.

The Catalans took a 2-0 advantage into the semifinal second leg and when Lionel Messi made it 1-0 on the night (3-0 on aggregate) in the 27th minute the contest was all but killed off.

Antoine Griezmann scored an equalizer for the home side in the 87th minute to make it 1-1 on the night.

Barcelona will face Real Madrid in the April's final after Los Blancos completed a 5-0 aggregate win over city rivals Atletico on Tuesday.