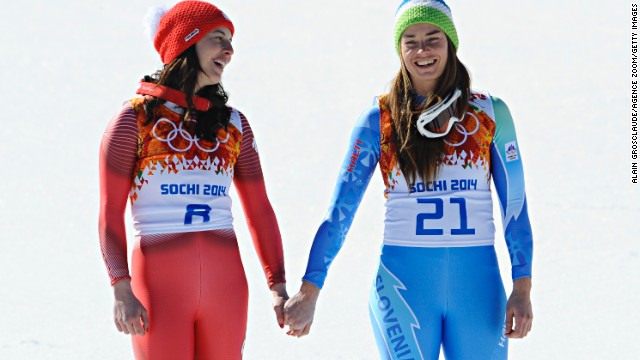 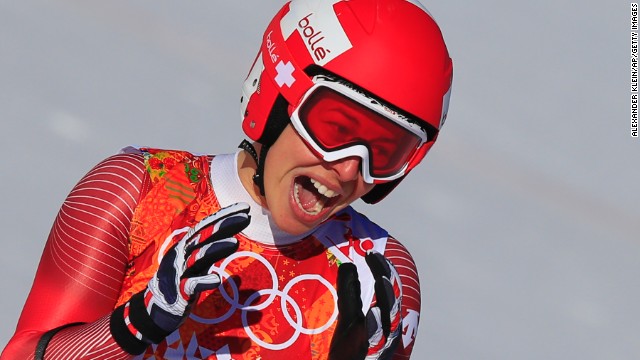 Gisin had appeared set to claim outright gold in the women's downhill after finishing with a time of 1 minue 41.57 seconds, which would have been a shock result given her lack of recent race victories. 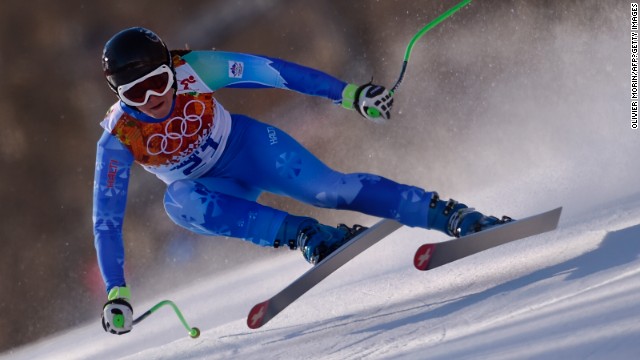 But 30 minutes later Maze -- who won the overall World Cup title last year -- clocked the exact same time to take a share of the gold. 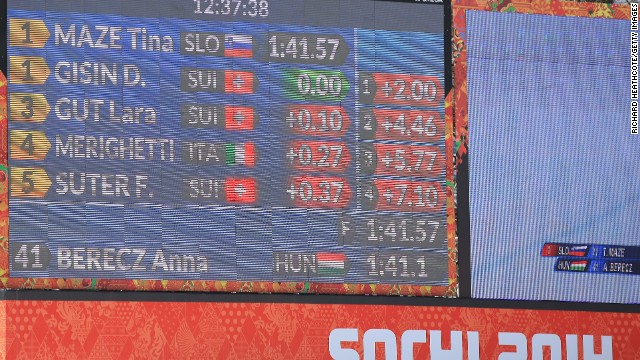 The scoreboard shows Maze and Gisin finishing with the same time. 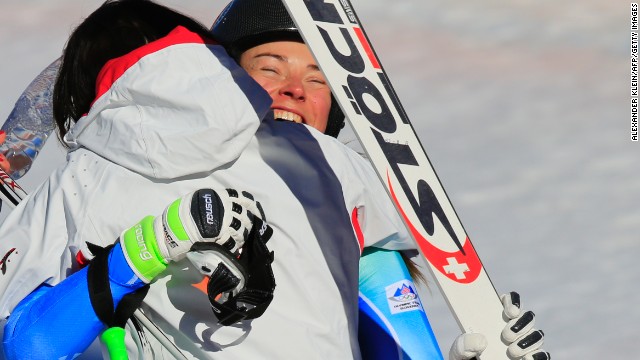 It was the first time in the history of alpine skiing at the Olympics that there were two gold medalists in the same event. 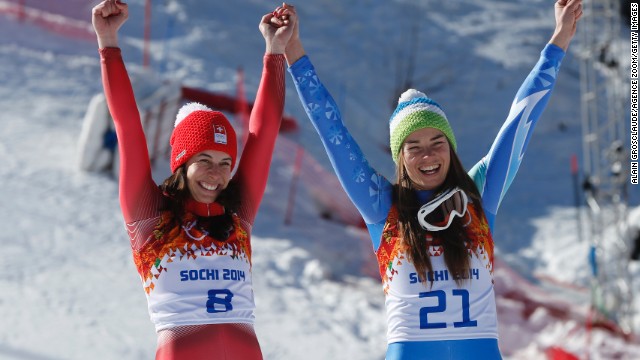 (CNN) -- They're the golden girls of downhill skiing -- but neither Dominique Gisin nor Tina Maze could hide their surprise after making Olympic history in Sochi.

Cue elation, huge smiles and hugs after the two skiers recorded the same time to each win a gold medal for the first time in the history of alpine skiing at the Olympics, following a dramatic conclusion to the women's downhill event Wednesday.

Switzerland's Gisin, who has not won a World Cup downhill race since 2009 and whose best finish in the downhill this season is seventh, had appeared set to claim gold outright after finishing with a run of 1 minute 41.57 seconds.

But last year's overall World Cup champion Maze had other ideas -- powering through the course in the exact same time to take a share of the spoils.

"I have no words," the Slovenian, who won silver in the super-G four years ago in Vancouver and was one of the pre-race favorites, told reporters.

"This doesn't feel real. I will have to see my team to get myself together and realize how much this means to us," added the 30-year-old, who kissed the snow after finishing her run.

"I have been dreaming about this since I was little. The first ski race I ever won in my life was a downhill, so before I went down the track today I said to myself: 'This has to be it. I can do it,' and I just went for it."

Gisin failed to finish in 2010 but, after a year interrupted by injury, this time she came through in style to shock not just her rivals but also herself.

"This is incredible," the 28-year-old told reporters.

"I am overwhelmed with emotions. I am so happy -- what a day. I don't think I even dreamed about this. Now that I have won, I am living the dream, but this is better than dreaming."

This not the first time Gisin has tied for top honors -- she shared the podium with Sweden's Anja Paerson when she claimed her maiden World Cup victory in 2009.

An outsider for the title on this occasion, the Swiss Air Force pilot was ranked 12th in the overall World Cup standings ahead of Sochi and suffered concussion in her only previous Olympics appearance.

"That's the story of my career, up, down, forwards, backwards," she added.

"I have had a lot of injuries in my life, I had nine knee surgeries. I was close to the podium a lot. I never won a medal on a big event, so what comes around, goes around," she said.

OMG! Gold!!was für ein tag...thank you all for the wonderful support, it's a dream, only better because it's the reality!

Gisin, who started skiing when she was 18 months old, started eighth in Wednesday's race and then faced an agonizing wait until Maze, who went out 21st, crossed the line some 30 minutes later.

"I looked away and I looked up again and then I thought, 'Zero. That means we're good,' " said Gisin.

"I was so nervous, just waiting. There was nothing I could do but in the end I was ahead -- well, together with Tina, but that's fine. I am for sure happy where I am."

Gisin is the first Swiss downhill winner since Michela Figini in the Sarajevo Games 30 years ago.

Celebrations involved a phone call to Gisin's grandparents, who helped her learn to ski as a child.

"It was very emotional, they did so much for me," she added. "My whole family did. They always believed this would come, they always said you have to believe."

The pilot, who doesn't fly in the winter because "it is too stressful," believes the injury problems which have blighted her season gave her extra motivation to succeed in Sochi.

"I had trouble giving everything in races since the last injury, adding half a meter here or there, leaving a little more space rather than too little," she said.

"That's not how you win races. I didn't feel like an athlete anymore.

"Having to qualify, I had to fight in a strong team like this. That's what I needed, and now I feel like an athlete again and that's the biggest victory for me today."

There have been instances of shared medals in skiing at the Olympics.

In 1992, American Dian Roffe and Austrian Anita Wachter tied for second place in the same discipline.

Read: Skiing's pop queen Maze did it her way

Read: Why does the Winter Olympics matter?