Malaysian football fan's nightmare turns to dream thanks to Twitter 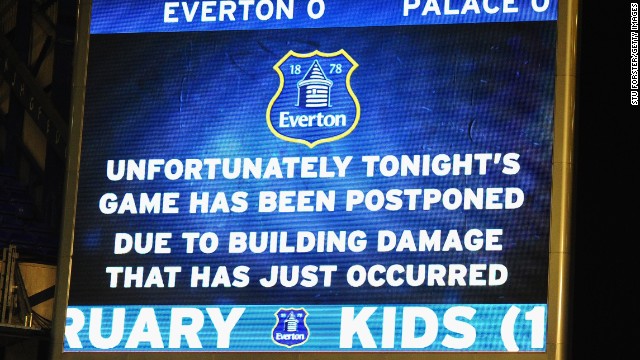 (CNN) -- It started as a dream trip from Malaysia to watch his beloved Everton play for the first time only, for the game to be called off due to the bad weather sweeping Britain.

But this is a story with a happy ending, as fan Rick Wee was given an access-all-areas tour and a chance to meet his heroes by way of recompense.

Wee has supported the English Premier League team, which prides itself on a reputation of being the "People's Club", for 30 years -- admittedly from some 6,500 miles away in his home country.

On Wednesday, he had tweeted excitedly prior to the Crystal Palace game: "Finally, 30 years since since supporting @Everton, will be watching EFC "live" for the 1st time," complete with a picture of him in his seats some time before kickoff

Everton arranged a meeting with the squad for @ric_wee, who came from Malaysia to watch a match for the 1st time. pic.twitter.com/YdnZC2jCnI

Less than an hour later, the game had been called off due to building damage nearby and, complete with a picture of his ticket, he bemoaned: "Dream to watch EFC play will continue to be on hold."

But such is the power of social media website Twitter that, thousands of retweets later, Wee, in the stands with his family, was contacted by the club.

Everton press office Helen Mayo wrote: "We've found him and are making sure he doesn't leave too disappointed, taking him to meet some of his heroes right now."

He was duly invited behind the scenes and into the players' lounge and dressing room where he met manager Roberto Martinez and left-back Leighton Baines, with whom he was later pictured sharing a laugh and a joke.

A disbelieving Wee later commented: "Wish to thank @Everton for great hospitality. Really appreciate it. Also much obliged to the many Evertonians sending warm messages over".

He later added: "Today @Everton just proved again that it's the People's Club taking extra effort to connect with fans. Salute the people running the club."

He returned to Goodison Park again on Thursday for a further more in-depth tour by former Everton striker Graeme Sharp to make his lifelong trip from Asia even more worthwhile.