Those killed were civilians, and four security guards were wounded.

The blast occurred when a suicide attacker drove an explosives-laden car into two bulletproof U.N. cars and detonated it, Hussein said. 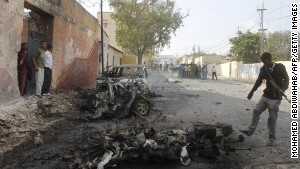 People gather near the site of a car bomb explosion in Mogadishu on February 10, 2014.

The area of the attack, Mogadishu's airport, is heavily guarded. It is considered one of the city's safe havens.

No U.N. personnel were killed or injured, a U.N. spokeswoman in Mogadishu said.

The group has been designated a terrorist organization by the United States. It hopes to turn Somalia into a fundamentalist Islamic state by force but has launched attacks in other countries, such as Kenya and Uganda, that have killed dozens.

The U.S. military conducted an airstrike in southern Somalia in late January against a suspected militant leader, a U.S. military official told CNN then. It is unclear if that leader was killed.

On Wednesday, eight mortar rounds rained down on Mogadishu, security officials and witnesses said. No group has yet claimed responsibility for that attack.