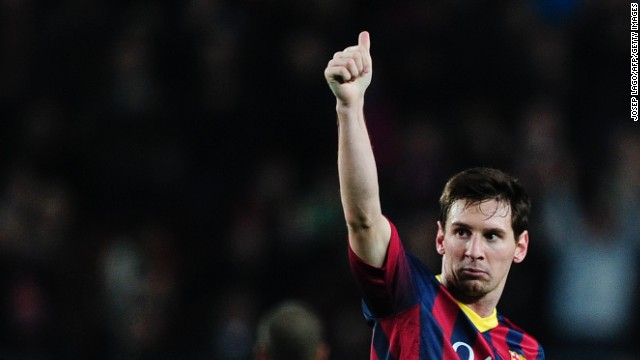 Only two players have scored more goals in the Spanish league than Lionel Messi.
STORY HIGHLIGHTS

(CNN) -- Barcelona put on a sumptuous display against Rayo Vallecano and it was no surprise that Lionel Messi led the way, rewriting the record books in the process.

The four-time world player of the year scored two goals to give him 228 overall in the Spanish league, passing Alfredo di Stefano's mark and placing the Argentine into a tie for third with a man who, like di Stefano, made a name for himself at Real Madrid, Raul.

Barring a serious injury and change of leagues, Messi -- who did miss two months this season with a leg complaint -- is sure to take over top spot from Telmo Zarra. The latter scored 251 goals, 17 more than Hugo Sanchez.

"I'd like to think that Messi still has a bit to go before he's 100 percent fit," Barcelona manager Gerardo Martino told the club website. "If he wants, he'll break any record he sets his mind to.

"He's only 26 years old and he'll lose count (of the records he breaks). Barca enjoy him and Argentina does as well."

Barcelona's awesome display against Vallecano prompted the Catalan club's website to use the word 'caviar' in describing the affair and the free-flowing football on offer served as a warning for Manchester City, which collides with Barca next week in the Champions League.

Messi's goals came in the 38th and 68th minutes at the Camp Nou, with Adriano, Pedro, Alexis Sanchez and the returning Neymar chipping in with the others.

Neymar, the Brazilian whiz, had missed about three weeks with an ankle injury.

"This month has been long," Neymar told reporters. "I was very eager to play."

Despite the ruthless performance, Barcelona can't gain a significant lead over Atletico Madrid.

Madrid earlier Saturday blanked Real Valladolid 3-0 at home, realistically claiming all three points with two goals in the first four minutes. It was relief for Atletico, which had lost three straight games in all competitions.

"It was convenient, fast and what I like is the intensity with which the team went out with," Atletico manager Diego Simeone told the club website.

Barcelona and Atletico each have 60 points, and Real Madrid can join them by winning at Getafe on Sunday.