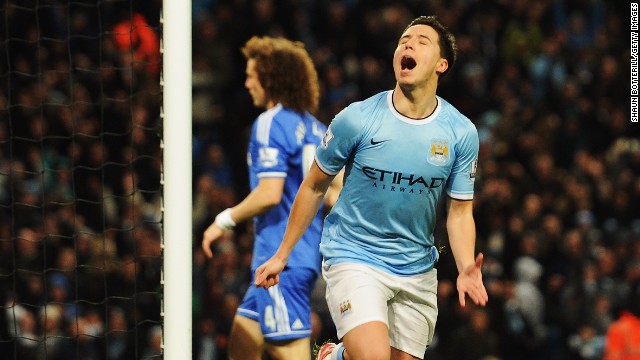 Samir Nasri was jubilant after scoring in Manchester City's 2-0 win over Chelsea in the FA Cup.
STORY HIGHLIGHTS

City downed Chelsea 2-0 in English football's top club competition to reach the quarterfinals and regain some of the momentum it lost in the wake of a demoralizing defeat to Jose Mourinho's men in the league less than two weeks ago.

The result was indeed the perfect way for Man City to prepare for likely an even bigger outing next week -- against Barcelona in their two-leg Champions League round of 16 tussle.

When Chelsea stunned Man City 1-0 in early February, the host was kept quiet following a promising start and the Blues always threatened on the counter.

City was in cruise control throughout, taking the initiative through Stevan Jovetic's opener in the 16th minute and clinching the game courtesy of Samir Nasri's strike in the 67th.

Chelsea -- which leads Arsenal by a point and Man City by three in the Premier League -- managed a mere two shots in Manchester. None were on target.

"We wanted revenge today," Manchester City captain Vincent Kompany told ITV. "Twelve days ago we had a really bad game, we gave them a lot of chances but we created a lot as well. Today we just adapted. They played the same and it was comfortable for us.

"From the word go we were hard in the challenge, we were spot-on creating a lot of chances and we didn't give any away. It's a big win against a strong team."

Mourinho was adamant that Nasri's goal should have been disallowed for offside but conceded that his side were "poor" on the day.

"I think City was good, Chelsea poor," said Mourinho, who added Chelsea would look for strikers in the off-season . "City deserved the victory.

"I give more credit to my players for the phenomenal game they played two weeks ago. To do it twice in two weeks, it's difficult and almost impossible."

Sunderland, relegation contenders in the Premier League, continued to shine in Cup competitions as it beat Southampton 1-0 at home. Sunderland, in the upcoming League Cup final against City, and Southampton both fielded under-strength teams, not unusual in the Cup any longer.

Arsenal hosts Liverpool in Sunday's standout clash a week after being thrashed 5-1 at Anfield in the league.

Another change at Fulham

Fulham, bundled out of the FA Cup in the previous round by Sheffield United and last in the Premier League, is on to its third manager of the campaign after hiring Felix Magath to replace Rene Meulensteen.

The no-nonsense Magath led Bayern Munich to back-to-back doubles in 2005 and 2006 but may be best known for guiding Wolfsburg to its lone league German title in 2009.

"Felix is an accomplished manager with multiple honors in the Bundesliga and a hunger to replicate his success with Fulham in the Barclays Premier League," Fulham chairman Shahid Khan told the club website.

"I'm especially impressed with the reputation Felix has for coming into clubs at difficult times, often late in the season, and lifting them to their potential and beyond. Felix knows that is precisely the task awaiting him at Fulham, and he made it abundantly clear that he wants and is ready for the opportunity."