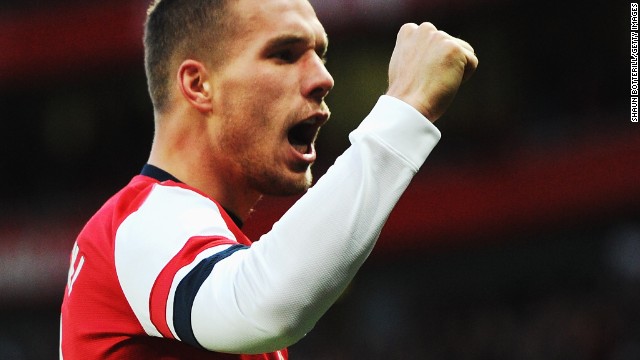 (CNN) -- Arsenal gained revenge over Liverpool for their humiliating defeat last weekend with a 2-1 victory in a pulsating English FA Cup fifth round tie at the Emirates Sunday.

Humbled 5-1 in the English Premier League eight days ago, Arsenal restored pride and stayed on course for a first trophy since an FA Cup triumph in 2005.

Goals in each half from Alex Oxlade-Chamberlain and German international Lukas Podolski gave Arsenal a two-goal cushion before a Liverpool fightback.

Podolski tripped Luis Suarez to concede a penalty at the other end, which visiting captain Steven Gerrard converted.

Liverpool, who had failed to convert earlier chances, with Daniel Sturridge the worst culprit, pushed forward in search of an equalizer and might have earned a second penalty moments later.

Oxlade-Chamberlain made a rash challenge on Suarez, but referee Howard Webb ignored strong claims for the spot kick.

The hard-fought victory has earned Arsenal a home tie in the quarterfinals against Everton, who beat Swansea 3-2 earlier Sunday in an all-EPL clash.

It will also boost morale ahead of a last 16 Champions League clash against Bayern Munich Wednesday, having been eliminated by the German giants in Europe's premier club competition last season.

Manager Arsene Wenger also hit back at a jibe from Chelsea manager Jose Mourinho, who had called him a "specialist in failure" in reference to Arsenal's long trophy drought.

"I do not want to go into that - those were silly, disrespectful remarks," Wenger said when asked about Mourinho's remarks.

"I know one thing, it is more embarrassing for Chelsea than it is for me."

They could face city rivals Sheffield Wednesday, who still have to play Charlton in a postponed fifth round tie, for a place in the semifinals.

In Italy's Serie A, champions Juventus maintained their relentless march towards another title with a 3-1 win over Chievo in Turin.

It left them nine points clear of second-placed Roma, who kept pace with a 3-0 win over Sampdoria later Sunday.

Kwadwo Asamoah rounded off a one-two with Fernando Llorente to put Juve ahead after 17 minutes with Claudio Marchisio adding a second on the half hour mark.

Martin Caceres put the ball past his own goalkeeper Gianluigi Buffon to give Chievo some hope before Llorente headed a fine third soon afterwards to restore the two-goal cushion.

Third-placed Napoli stretched their lead over Fiorentina to six points with a 2-0 away win at struggling Sassuolo with goals from Blerim Dzemaili and Lorenzo Insigne. Fiorentina lost 2-1 to fifth placed Inter Milan Saturday.