(CNN) -- Andrew "Goofy" Saunders is like no stripper you've ever seen before.

For one, he's built like a wrestler with a rainbow afro that "Krusty the Clown" could only dream of. For two, his stage is a hurtling train. And for three -- this is the clincher -- the only item of clothing he's likely to shed is his baseball cap.

But boy, does this 20-year-old from the Bronx know how to dance around a pole.

"We tell people we're part time strippers," he says over the phone, the sound of cars blaring in the background of his native New York.

"It's just a little joke, it gets people to laugh."

"We call it Lite Feet"

Saunders is the founder of WAFFLE (We are Family for Life Entertainment), a group of 15 dancers whose gravity-defying pole pirouettes -- accompanied by thumping beatbox tunes -- have earned them quite a reputation on the city's subway. 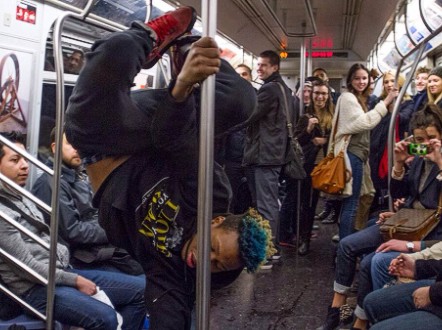 Every week the young men -- aged between 17 and 21 -- perform their special brand of breakdancing turned ballet on the underground trains; delighting, bemusing, and sometimes infuriating commuters.

The urban acrobats swing from handrails or backflip down aisles, with the ease and bravado of youngsters who grew up using the city as a giant dance floor.

"Chicken Noodle Soup," "Needle and Thread," "Walking on Air" -- these are the names of some of WAFFLE's signature moves, performed with a cheeky swagger to their own mish-mash recordings of hip hop, funk, and electro beats.

"The way we move -- our energy, our shoe tricks, our hat tricks -- is something that's completely new," said Saunders.

"We call it 'Lite Feet' -- it's a mixture of dances put together," he added. "There's this dance, the 'Charleston' (made popular in the 1920s), and that's one of the closest things we've been able to find to it."

"Everyone has an opinion"

"It's showtime!" has become something of a rallying cry for the buskers, who usually split into smaller groups of three, targeting the busiest carriages to earn up to $100 a day. 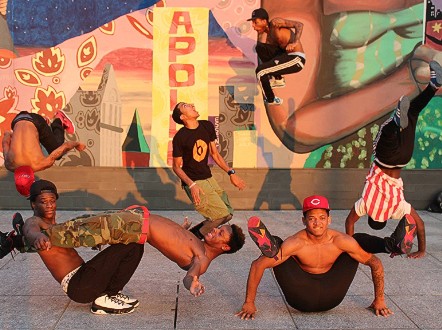 The crew use a mixture of breakdancing, 1920s swing, and even pole dancing.
WAFFLE

Watch one of the many YouTube clips of the dancers expertly twirling their caps on a perfectly poised elbow or nonchalantly "Moonwalking" along a trundling train, and the reactions are as varied as New Yorkers themselves -- grandmothers cheer, hipsters appear bored, and tourists scramble for their phones.

"There are a lot of copycats out there now," says Saunders, who first started busking seven years ago.

Our energy, our shoes, our hat tricks, is something that's completely new
Andrew "Goofy" Saunders

"Everyone has an opinion. But this is how we make a living, so we don't have to ask our parents for money or have a boring job. We're just trying to do something positive."

Not everyone sees their shows in the same light, with a New York Times article on the troupe attracting some unfavorable comments.

"They definitely have some impressive moves. They are also extremely annoying, and more importantly—dangerous," wrote Josh F.

Has Saunders ever hurt anyone during his act?

"No. Just a little graze, but I've never really hit anyone," he said. "People don't know I've been doing it for years. I know what I'm doing." 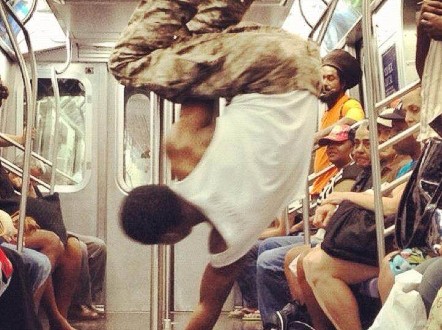 Love them or loathe them, there's no denying the troupe's talents.
WAFFLE

From Bronx to big time?

It was as young teens growing up in low income households in Harlem, Brooklyn and the Bronx, that Saunders and his fancy-footed friends first came up with the idea of busking as a way to raise money to attend local dance competitions -- or "battles."

"You had to pay $10 to get in, so asking your mom every week got annoying. Or they probably won't have the money to give to you right away."

I want to bring Lite Feet to the world
Andrew Saunders

"We had an idea to go on the train and make the money ourselves. And the money was good -- we made over the amount we needed. So we just kept on going."

The troupe has since appeared in various video clips and mini documentaries, with member "Kid the Wiz" even taking his deft hat tricks and comedic style across the country on "America's Got Talent."

"My main goal is to get off the train and work with more people," said Saunders.

"I want to bring Lite Feet to the world."