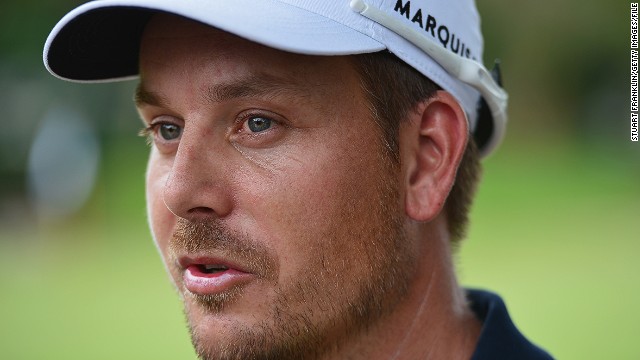 Henrik Stenson has suffered two slumps in form during his career, but he returned to form in 2013 in spectacular fashion. 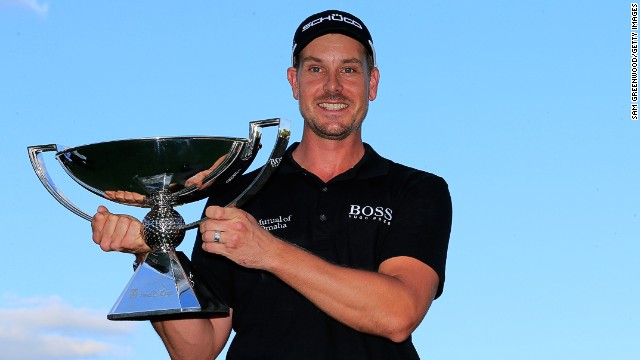 In the space of eight weeks, Stenson won the PGA Tour's FedExCup earning himself $10 million dollars in the process. 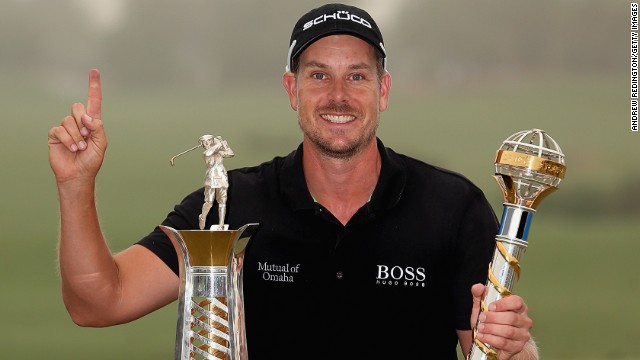 He followed it by winning the European Tour's Race to Dubai. No golfer had ever achieved this prestigious double. 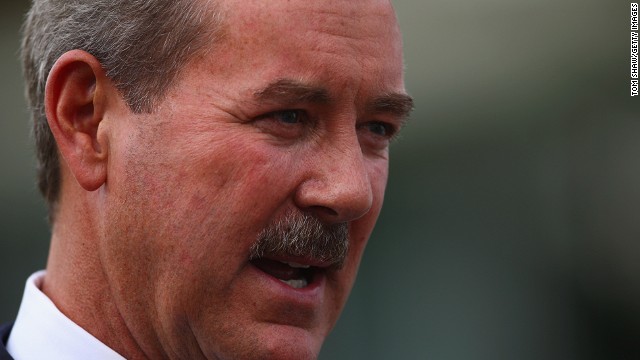 Stenson had money invested with convicted fraudster Allen Stanford and reportedly lost several million dollars in the Texan's Ponzi scheme. The Swede was able to weather the financial storm but said that losing his money to Stanford was "more disappointing than taking it to the casino." 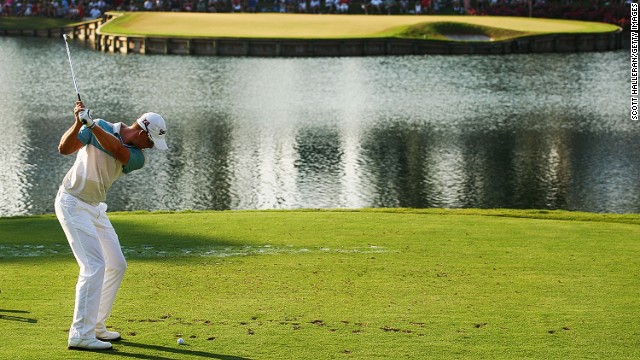 May 2009: Three months after Stanford was arrested, Stenson claimed the biggest win of his career winning The Player's Championship at Sawgrass. 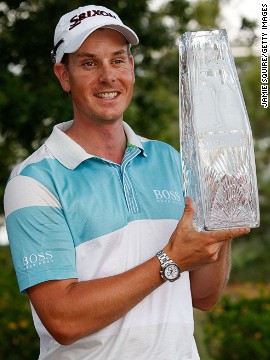 Stenson shows off the TPC winner's trophy. The win took him to a then career high ranking of world no. 5. 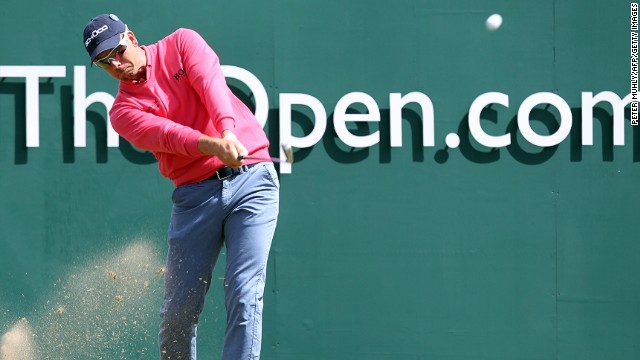 Stenson's form deserted him the following season shortly after finishing in a tie for third at the Open Championship. A bout of viral pneumonia also derailed his game before he reemerged with a win at the South Africa Open in November 2012. 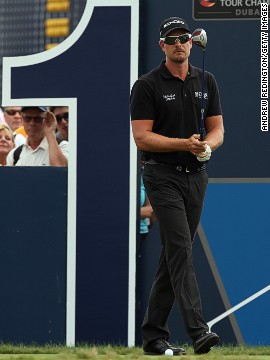 In the summer of 2012, Stenson and his sport's psychologist worked on implementing a long-term plan rather than trying quick fixes. The strategy has borne fruit with Stenson recording three wins in 2013. 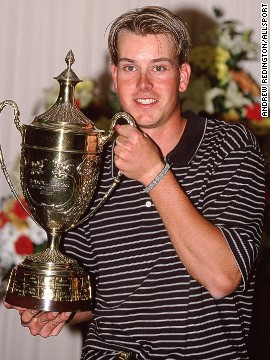 A 25-year-old Stenson with the Benson and Hedges International Open trophy in 2001. His maiden European Tour win was followed by a dramatic slump the following season where he missed 14 cuts in 22 events and won just over €40,000 ($55,000) in prize money. 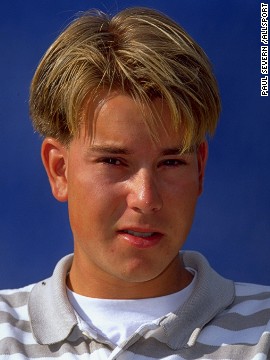 Stenson pictured in 1999, a year after turning professional. 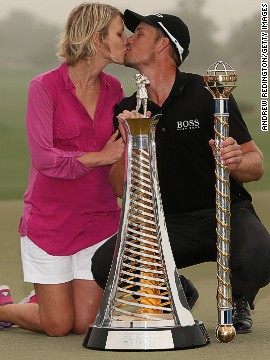 (CNN) -- Henrik Stenson's accountant must be grinning from ear to ear after the Swedes's incredible winning streak last year. But the world No. 3 isn't getting carried away.

"Like someone said: 'Money is only paper,' right? It's not really going to make you much more happy or extremely sad if you lose a bit," Stenson says.

But it's not the fiscal peaks that have helped shape the 37-year-old's apparently easy-going attitude to money as much as one spectacular loss.

Stenson was a victim of the convicted fraudster Allen Stanford and reportedly lost several million dollars in the Texan's $7 billion Ponzi scheme, which was uncovered in 2009.

The Swede said it wasn't so much the scale of the losses but rather the way in which the money went.

"It was probably more about, you know, how you lose something when you think something is a safe investment when it turns out it (isn't)," Stenson told CNN's Shane O'Donoghue.

"That's got to be more disappointing than taking it to the casino -- you lose, but you know what the risks are. That was probably more what upset me the most about the whole thing.

"I guess I was in a position where I can make up for it in a pretty short space of time. Other people wouldn't be so lucky. For me, it's like a closed chapter. I moved on long ago, but I keep getting reminded of it now and again," he says, before breaking into a smile.

Getting up and down

He can afford to smile after becoming the first golfer to win both the PGA Tour's FedExCup and the European Tour's Race to Dubai in the same season.

It was an unprecedented end to a season which saw Stenson return to golf's top table after recovering from a debilitating and prolonged slump.

After winning golf's "fifth major," The Players Championship at Sawgrass in May 2009, Stenson looked set to join the sport's elite with strong showings at the U.S. Open (ninth place) and the U.S.PGA Championship (tied sixth) later that season.

A tie for third in the Open Championship at St Andrews the following year only seemed to confirm his status as a serious contender for a major title.

But things fell apart in the second half of 2010 before completely unraveling in 2011 with a succession of missed cuts and only one top 10 finish all year.

As if the loss of form wasn't sickening enough, Stenson then picked up a waterborne parasite on holiday in November 2011 which led to a bout of viral pneumonia.

"He lost what we call the ground force because physically he was poorly," says Pete Cowen, Stenson's long-time swing coach.

"If you lose your physical strength you lose all your control."

That lack of power sent Stenson tumbling down the rankings from a career high of world No. 5 in 2009 to 230th.

It wasn't the first time Stenson had gone from golden boy to nowhere man.

"It was big slump. They were really tough times," he recalls. "I was really lost with my game, I lost my confidence."

On course for recovery

The second, more recent reverse was less to do with any technical deficiencies than with "frustrations," he says at not being able to compete like he used to.

"The most important thing I did with my old sport psychologist (Torsten Hansson) was to start working on the long-term planning. When you are down and out, it's so easy (to go for) short-term solutions," Stenson said.

"The quick fixes don't work. I think you've got to put a plan in place and work towards it -- slow but steady progress -- and eventually you will get to the point where you want to get."

With a new physical and psychological regime in place, Stenson started to see the green shoots of recovery with victory at the South African Open in November 2012.

"That was hugely important, especially the way I won it because I held the lead for most of the weekend and then dropped back on Sunday and I managed to come back on the back nine. That was huge for the confidence ... after three-and-a-half years without a win."

Stenson's season-ending victories may have grabbed all the headlines but his comeback year also included his best-ever performance at a major championship -- second to Phil Mickelson in the Open Championship at Muirfield -- backed up by a third- place finish at the U.S.PGA Championship.

So can he break his duck in 2014 and become Sweden's first major winner?

You know, you are going to have your ups and downs. I might have had two (downs) that were deeper than most but the belief never went away
Henrik Stenson

"If my game is in good shape and it's my week, I definitely think so," he says.

Cowen can also see his pupil of 13 years clinching that elusive prize.

Stenson will get his first chance at Augusta National in April, but before that will be lining up at Dove Mountain, Arizona for the WGC Match Play Championship on February 19 -- a tournament that he won in 2007.

Whatever happens this coming week and for the rest of the season, Stenson appears well equipped to deal with what comes his way.

"You know, you are going to have your ups and downs. I might have had two (downs) that were deeper than most, but the belief never went away.

"What we learn is to never give up. If you keep at it, if you keep the belief, you can achieve great things."