The orphan who became a billionaire Russian 'Tsarina'

(CNN) -- She's been dubbed the Russian "Tsarina," a former circuit-board-equipment seller who happened to sit next to one of the world's richest business moguls on a plane -- and now heads his company.

Meet Margarita Louis-Dreyfus, the chairperson of French commodities giant Louis Dreyfus Holdings, with a net worth estimated at an eye-watering $6 billion according to Forbes.

Orphaned at seven after her parents died in a train accident, Louis-Dreyfus was raised by her grandfather in what was then the Soviet Union, studying law at Moscow State University.

She met her future husband, billionaire Robert Louis-Dreyfus, on a plane in 1988. When he died from leukemia two decades later, the mother of three was left in charge of one of the biggest commodity companies on the planet, as well as the French football club Olympique de Marseille.

You might not recognize the 160-year-old Louis Dreyfus firm, but it's the one trading 70 million tonnes of agricultural goods each year, employing 30,000 people.

And since 1851 it's been handed down from one male heir to another -- until now.

Margarita Louis-Dreyfus sat down with CNN's Leading Women to talk about the act of "fate" that sat her next to her future husband, how his illness taught her to manage "big egos," and her plans for a company which claims to feed and clothe 500 million people worldwide. 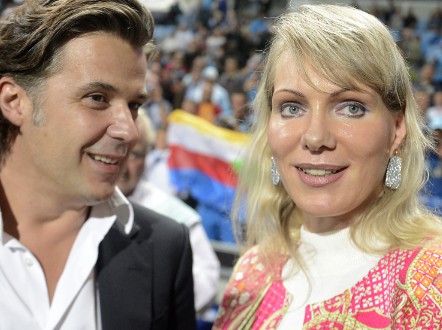 Margarita Louis-Dreyfus with Vincent Labrune, president of French football club Olympique de Marseille, of which she is the owner.
Getty Images

"My memories of growing up in St Petersburg are very positive. I grew up without parents, but with my grandfather. But I didn't feel that I was really abandoned -- I had enough love from him. During the week I was in the boarding school and when I came home every weekend I had fun with my friends. I was not cold in winter -- I'm telling you this because many people expected that I suffered from hunger. The Soviet Union in the 1960s and 1970s was OK. Of course I didn't have the luxury that children have today, but I had freedom. I had time to read which was very important generally for Russian children. It gave me a sense of the wide world and gave me a wish to see the world."

"I met Robert on the plane on the way from Zurich to New York. We made a stop in London where he had just started his job as CEO of Saatchi & Saatchi and I was going on vacation to Switzerland from New York. We met shortly on the plane, a short conversation, and after this when I came back from vacation we met again. He was coming to Switzerland every weekend because his dog was here. The plane was empty and the computer put us together and I was wondering why...but it was kind of fate."

"The moment I gave birth to the twins I learned Robert had leukemia. So nobody can live a normal life anymore. I had been a housewife up until the birth of the twins. Then came this big sickness that changed our lives completely. And we couldn't have a normal family vacation where everybody was happy and everybody was running around. The sickness was always there and we were traveling to different doctors But we had many hopes that he would still have many more years."

"The medical world is also a man's world. In the three years of fighting for Robert's life I had to unite five big professors from around the world at one table. Each of them had different ideas and different strategies and were used to their decision being followed. So for me, I felt the strength of the woman. Because all of these men, they have big egos and I was kind of there to absorb these egos, give them the feeling of respecting their opinion -- even if you don't take it. Later when I came to the man's world of commodities, also with big egos, I was used this experience. Nobody knows everything so the main thing is to work together."

"The Louis Dreyfus Foundation has a focus on giving back. It's a new project for us, it's now one-year-old and the whole idea was about education. For example in Israel, the youth orchestra includes Arabic children together with Jewish children who are learning through music how to love together. You know 'education' is a magic word. And this magic word also becomes important in our foundation -- educating the farmers on how to produce sustainably and to feed themselves."